Roche-A-Cri Mound looks so out of place. 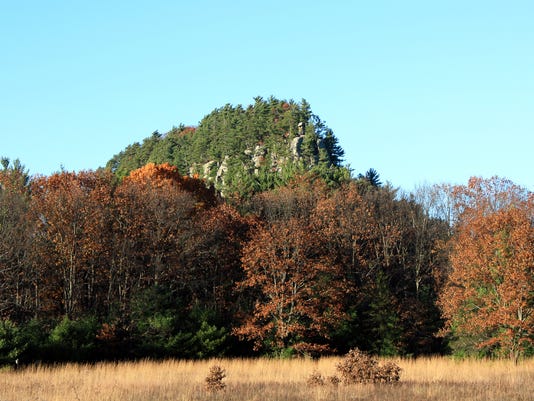 Roche-A-Cri Mound looks so out of place.

A steep, tree-covered mound of blocky white dolomite and orange sandstone, it rises abruptly 300 feet out of the almost entirely flat countryside of central Wisconsin.

When the last glacier plowed through and leveled most of the state, it stopped short of Roche-A-Cri. The mound stood as an island in Glacial Lake Wisconsin, a 70-mile-long, 160-feet-deep lake that formed when ice near the Wisconsin Dells blocked glacial water from draining down the Wisconsin River.

But the seemingly out-of-place mound is only the beginning of the curious things at Roche-A-Cri State Park.

At the base of the bluff, ancient petroglyphs and pictographs are scratched and painted onto the bluff's soft sandstone.

"We have the only accessible rock art in Wisconsin — it's accessible to all people," said Heather Wolf, the property manager for the park. "A lot of people come from all over the U.S. and all over the world to see both (the mound and the art)."

More modern graffiti — including from early European settlers — has obscured some of the historical etchings. One, which reads "A.V. DEAN. N.Y. 1861.," is at least a dozen feet up the rock face. A sign at the site says the height suggests the men were on horseback when they carved their names.

Men in that time also left their mark on the rock in another way. In 1861, members of Company D of the Wisconsin 1st Cavalry Sharpshooters camped at Roche-A-Cri. Round indentations in the rock face suggest they used it for marksmanship trials.

Long before the cavalry moved through, however, ancestors of the Ho-Chunk inhabited the area, no doubt using the mound as a landmark for navigation as well as carving arrows, crescents, canoes, birds and other figures into its base.

Archaeologists are still uncertain about the meaning of the carvings, although the crescents are thought to possibly mark astronomical events such as a solar eclipse or the lunar cycle, or they might represent canoes, which were sometimes stored on Carter Creek nearby. The birds might represent mythical thunderbirds, or symbolize the hawks and eagles that circle the bluff.

In the 17th and 18th centuries, French explorers traveled through the area and gave the mound its modern name: Roche-A-Cri, roughly translated as "crevice in the rock," for the large crack that runs down the bluff's rocky face.

By 1937, the state Highway Commission made Roche-A-Cri a roadside area along Highway 13. The Civilian Conservation Corps improved the property, and in 1948 it was transferred to the Conservation Commission (the precursor to the state Natural Resources Board) to become a state park.

Today, five miles of trails wind through the 605-acre property, including a 303-step staircase to the top of the mound, where an observation platform offers sweeping views of the surrounding landscape.

"On a clear day, you can see really far," Wolf said.

In the winter, the park's main entrance is closed, but visitors can park at a small lot off Czech Ave. just to the south.

From there, a short trail leads through an open prairie and affords views of the looming mound. The park's friends group worked to restore this prairie, once a dominant landscape in central Wisconsin.

A short trail loops to the east, or you can continue hiking through the woods and over Carter Creek.

Follow the fork to the right, then the left to cross the paved road that circles the park. There, a small walkway leads to a platform and informational kiosks for viewing the petroglyphs. Don’t forget to look up — it's astounding how high some of the inscriptions are.

Continue following the trail to the north past the petroglyphs and around the mound. A bonus for hiking when the leaves are down: more views of the mound's steep and sometimes rocky sides.

The stairway to the top of the mound begins on its northern side. In order to protect the natural area, this is the only way up.

The newish stairway — rebuilt in 2012 — provides a good workout to the top, with a few platforms for resting and reading informational signs. Look for jack, red and white pine as you hike, and turkey vultures that soar on area thermals and roost on the mound in the summer. Note that the stairs are not open to pets (leave Fido at home or with someone at the bottom) and are not maintained in the winter.

"From the observation area on the top, you can see the other mounds in the surrounding Juneau and Adams County area," Wolf said.

On a clear day, that could include, some as far as 24 miles away, along with Friendship Mound, 365 feet tall and one mile southwest; Quincy Bluff, 250 feet high and 6.5 miles west; and Necedah Mound, 200 feet high and 12 miles west. 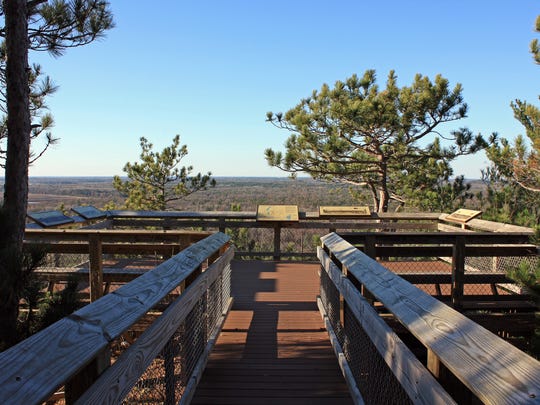 An observation deck at the top of Roche-A-Cri Mound provides sweeping views of the surrounding countryside. (Photo: Chelsey Lewis/Milwaukee Journal )

Back at the bottom, follow the trails that wind through the woods to the north and west, or the road around the west side of the mound and past a historical marker that notes its place on the National Register of Historic Places.

The park features a rustic (read: no showers), 41-site campground that's closed in the winter but is a nice option if more popular campgrounds in the Dells area (Devil's Lake, Mirror Lake) are booked up in the summer.

In the winter, trails are not groomed but are open to hiking, snowshoeing and cross-country skiing.

More information: Roche-A-Cri is open year-round from 6 a.m. to 11 p.m., but the stairway to the top of the mound closes at sunset each day.

The main entrance is at 1767 Highway 13, Friendship, and is closed in the winter. Another parking lot, off Czech Ave. just southwest of the main entrance, remains open and is paved.

As with all Wisconsin state parks, daily admission is $8 for residents and payable at a dropbox in the parking lot.