Facebook Messenger now lets you unsend messages, if you act within 10 minutes

Ever say something you immediately regret over Facebook Messenger? You now may be able to take it back.

Facebook Messenger now lets you unsend messages, if you act within 10 minutes

The social network announced that it has begun rolling out a new unsend feature in the Messenger app. However, there's a catch. USA TODAY

Ever say something over Facebook Messenger you immediately regret? You now may be able to take it back.

After first appearing last year, Facebook on Tuesday announced that it has begun rolling out the feature to its Messenger apps for iOS and Android.

Similar to deleting messages from a conversation on Facebook-owned WhatsApp or Instagram, to delete a message from a single or group chat you simply need to tap on the one you want to remove, press delete and choose the option labeled "delete for everyone." 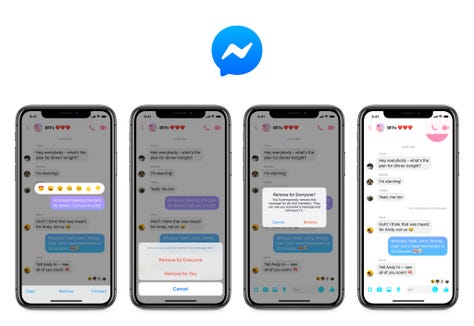 Unlike the "unsend" feature in Instagram's direct messages, however, you will only have 10 minutes from when you send the message on Facebook Messenger to delete it from the chat for both parties. Similar to WhatsApp's delete feature, the removed message will be replaced with a line of text saying that you "removed a message."

After that 10-minute period lapses, you can still delete messages, but it will only be for your side of the conversation. The person or group you are chatting with will still see what you originally sent.

Facebook initially announced that it would be adding the "unsend" feature for everyone last April after it was revealed that messages CEO Mark Zuckerberg had sent to other users were removed from the users' inboxes while older messages that those users sent Zuckerberg were still there.

Of course, if the other person sees or screenshots your message before you can remove it there is no way to take that back.