After 47 years, Oakfield's Peter Williams receives recognition for his state championship. He went to two practices and set a record in blue jeans.

At least, that’s how he tells it.

Before that year, Williams was a farm boy who found just enough time to play football in Fond du Lac County. But at the beginning of his senior year, his head coach issued an ultimatum.

“Coach walks up to me and says, ‘Williams, you’ve got to cut your hair,’” he said.

At the time, if a football player's hair went past his collar, it was too long. Williams told his coach he would not cut his hair, and the coach replied that the senior would not play football.

Williams stood his ground, and did not compete in any high school sports that fall or winter. There wasn't much time in Williams’ schedule for practice anyway. He grew up on a big dairy operation and had chores after school. 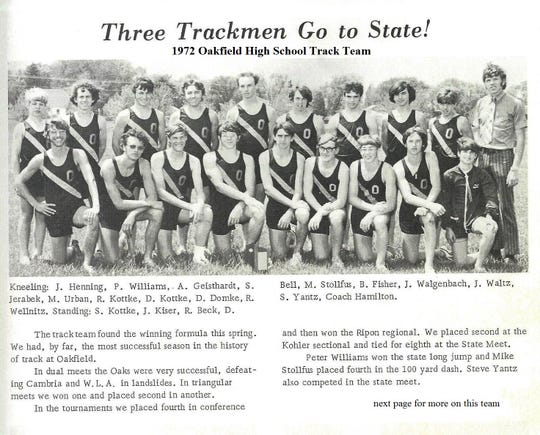 Because the track season ended on graduation day, the 1972 team was featured in the 1973 Oakfield yearbook (Photo: Courtesy of Jim Kiser)

However, when the spring season came around, a young biology teacher, John Hamilton, recruited him for the track and field team.

Jim Kiser, a classmate who competed on the track and field team at the time, remembered the conversation between Williams and Hamilton: “Coach had asked him, 'Peter, would you like to come out and run for me?' Peter says, 'No, I don’t want to run.' (The coach) says, 'Well, maybe you’d like to jump?' ”

Williams agreed to give it a try. And by his own account, he broke the school record for the long jump while wearing a pair of blue jeans and tennis shoes.

But it was a bit of a stretch to call him a member of the team. Williams attended only two track and field practices the whole season.

“I went to the first track practice, and I ran around town and I thought to myself, 'This is just wasting my time,' ” Williams recalled.

He had over 100 head of cattle to feed and cows to be milked. He had to shovel silage and throw hay bales down.

He and Coach Hamilton came to an agreement. Williams would just attend the track and field meets and get picked up after his event to go home and do his chores.

But with little fanfare, Williams excelled.

He went on to win his event at the regional meet in Ripon and the sectional meet in Kohler. His jump of 19 feet, 7 inches sent him to the state meet in Madison.

By Day 2 of the meet, Williams was the only Oakfield athlete still competing.

Contrarian by nature, he had a bushy head of hair and did not wear an Oakfield uniform, opting instead for a T-shirt with Mickey Mouse on it. He remembers getting dirty looks.

It was Saturday, June 2, 1972, a day so windy Williams felt he lost almost a foot in distance. His recorded distance, according to WIAA records, was 21 feet, 2½ inches. Other reports had his winning distance at 19-10¼. But the distance didn't matter.

“There I was on the podium up in Madison,” Williams recalled. “I was on the highest block, and then there was second and third. There were all these pictures taken and (I thought), 'Wow, this is pretty cool, and I had my Mickey Mouse shirt on!' "

When the ceremony was over, Williams jumped off the podium, got in Coach Hamilton’s car and made the hour-long drive from Madison back to Oakfield — just in time for a ceremony of a different sort.

“We got back to Oakfield and parked out in front of the school. Anyway, we got out of the car and I hand the coach his track shoes that he bought me. I walked through the front doors of the school. I put on my graduation gown, and there was like four people left in line that were graduating. I walked up and graduated, and I was out of school.” 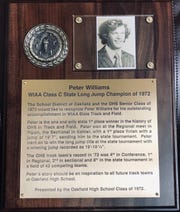 Peter Williams was moved to tears by the plaque presented to him by the Class of 1972 (Photo: Courtesy of Jim Kiser)

From state title winner to Oakfield High School graduate in one day — and then it was over. And, for 47 years, Williams thought nobody cared about his accomplishment.

Kiser cared, and is still in awe.

“A farm boy who only practiced two times in the track season because he had to go do chores to go to the state title and win on graduation, very unique,” Kiser said.

There was no award in Oakfield’s trophy case to honor Williams. No special recognition.

Kiser decided to change that this year.

At the 47th reunion of Oakfield High School’s Class of 1972, Williams was presented with a plaque that detailed his WIAA Class C state long jump title.

“When I was reading the plaque to him, he had tears streaming down his face. The girls were wiping the tears,” Kiser said. 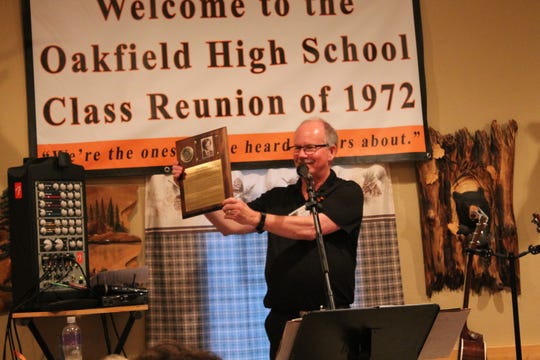 Jim Kiser spent countless hours researching Peter Williams' success to present him a plaque at the 47th reunion of the Oakfield Class of 1972 (Photo: Courtesy of Jim Kiser)

Williams choked up remembering the presentation.

“After 47 years, I got recognition for something I just long had forgotten about,” Williams said.

At the bottom of the plaque it read: ”Peter’s story should be an inspiration to all future track teams at Oakfield High School.”

The timing was particularly fitting, because Oakfield returned to track and field competition after 41 years last season.

Oakfield could not compete on the state level last year because it entered the season too late, according to WIAA rules, according to Williams. Still, he was able to see his own son compete.

“I guess genetics has worked and has been passed down,” Williams said.

This year, the school had several individual athletes compete in sectionals, although none qualified for a spot at the state tournament this weekend in La Crosse.

And none wore a Mickey Mouse shirt either.