Trade deal with Japan a positive step. We need to go further

Announcement of deal only an initial step – more needed to ensure a U.S.-Japan trade pact's full benefits for U.S. producers are realized.

Trade deal with Japan a positive step. We need to go further 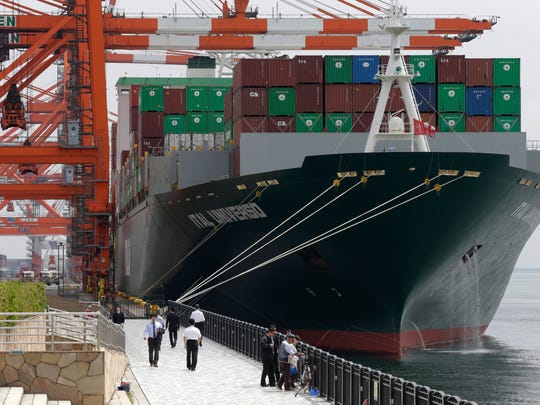 People walk in front of a container ship docked at a container terminal in Tokyo. The stakes in a U.S./Japan trade pact are meaningful: Japan is the fifth-biggest market for U.S. dairy, with $270 million in exports last year. (Photo: Shizuo Kambayashi, AP)

President Donald Trump and Japanese Prime Minister’s Shinzo Abe’s agreement last week to a limited trade deal between the two countries is an important development in expanding one of dairy’s most important trade relationships.

Still, the announcement is only an initial step – more will need to be done to ensure that a U.S.-Japan trade pact’s full benefits for U.S. producers are realized. We at the National Milk Producers Federation, along with our colleagues at the U.S. Dairy Export Council (USDEC) and producers and processors across the industry, are primed to work for further progress, helping to bolster the economic recovery we’re just beginning to see in our sector.

The agreement set to go into effect includes an important win for dairy, the phase-out of some tariffs on cheeses and whey. This is a noteworthy beginning to potentially greater gains that will be needed down the road, ones that build upon what our key competitors – the European Union, Australia and New Zealand – have secured there.

The stakes are meaningful: Japan is the fifth-biggest market for U.S. dairy, with $270 million in exports last year. It’s also a promising growth market – Japan’s milk production is declining, even as its per-capita consumption is increasing. While our exports have steadily met about one-fifth of Japan’s growing need for outside products for the past decade, the European Union has been growing as a major exporter into the country.

The U.S. is facing tougher competition due to a new trade agreement between the EU and Japan as well as the new Asian-Pacific trade agreement — the CPTPP — that both went into effect this year. A USDEC study earlier this year found that, without a level playing field for dairy, the U.S. risked losing $1.3 billion in exports over a decade, costing dairy farmers $1.7 billion in farm income. Status quo on Japan simply is not acceptable – because it is stepping backwards. We commend the administration for recognizing that and beginning the process of strengthening a long-term, mutually beneficial bilateral relationship.

We agree with U.S. Trade Representative Robert Lighthizer, as he noted to the House Ways and Means Committee this summer that “you cannot treat your best customer worse than you treat people from all these other countries in Europe and all the other TPP countries.” This deal appears to make headway toward that goal — but achieving it will depend on dogged determination in continued negotiations for a successful outcome.

As outlined in a letter coordinated by NMPF and USDEC and signed by 70 dairy companies, farmer-owned cooperatives, and associations to USTR and USDA, we need the U.S. government to move swiftly to finalize a strong comprehensive trade agreement with Japan that secures critical market access for the U.S. dairy industry. The agreement represents a valuable down-payment toward that goal. We will continue to advocate for a deal that builds upon the best dairy components of the Japan-EU agreement and the CPTPP, and affirmatively safeguards the use of common cheese names.

We can’t let this issue lose urgency, even after Prime Minister Abe and President Trump have gone home and the devilish details have been left to the negotiators. In addition to the deepened trade relationship we urge the U.S. to continue to pursue on dairy with Japan, more trade policy advancements are needed to advance dairy’s long-term sustainability, such as additional treaties with other agricultural-importing trading partners and quick congressional approval USMCA.

We are ready to do all we can to turn this early portion of the U.S.-Japan trade agreement – this important “down payment” on expanded access — into a fuller and broader agreement that will help U.S. dairy exporters keep pace and make gains in this great and growing dairy market.