A 14 percent decline in U.S. consumer meat consumption over the past decade has caused alarm 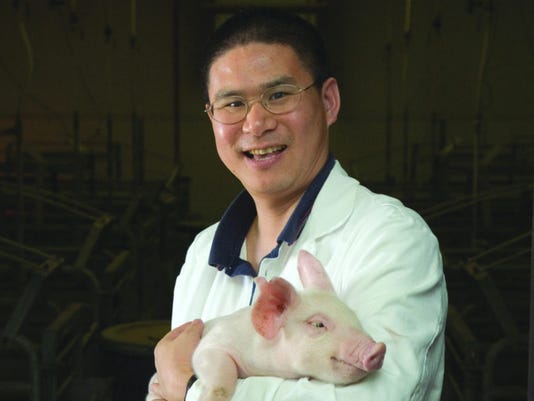 College Station — A 14 percent decline in U.S. consumer meat consumption over the past decade has caused alarm with one Texas A&M AgriLife scientist who warns the effects could be dire for overall human health and child development.

Dr. Guoyao Wu, distinguished professor in the department of animal science at Texas A&M University, said U.S. consumers have been overwhelmed with misinformation about protein and fats in meats, which in turn has led to many consuming less meat or no meat at all.

“Obesity rates have gone up the last 20 years, while consumption of meat has declined,” Wu said. “So I don’t believe that we can blame obesity on eating meat. Rather I think excessive portion sizes and lack of exercise are more likely the causes of obesity.”

Wu said animal meat has lots of beneficial antioxidants, such as taurine and carnosine, “which are extremely important to protect the gut, skin, heart, eyes, and other organs. Plants do not provide these antioxidants.”

Wu co-authored a paper that appeared in the American Society of Animal Science,http://bit.ly/2edWZv8, which examines the composition of amino acids in certain cuts of beef. According to the paper, meat consumption helps build muscle protein and ameliorates muscle loss in the elderly.

“People on a vegan diet tend to forget how important high-quality protein is to human growth and health,” Wu said. “If you look at the population of some Asian countries, most males are short and the children are stunted. Twenty years ago, one-third of the children were stunted. Now, less than 10 percent are stunted because of increased consumption of animal-source protein in their diets.”

In the journal article, Wu stresses that antioxidants found in meat are “essential for children and conditionally essential for adults to maintain retinal and cardiac functions.”

“In the U.S., there is ample supply of meat and protein,” he said. “Without including any meat from animals or any animal-source protein in your diet, it definitely leads to skeletal muscle loss. We must do something to stop this trend.”

The 2015 U.S. Department of Agriculture Dietary Guidelines Committee report concluded that the U.S. diet is low in vegetables, fruit and whole grains and too high in calories, saturated fat, sodium, refined grains and added sugars. More than two-thirds of adults and nearly one-third of children and youth are obese or overweight.

Wu said part of the issue is due to parents who do not cook meats or serve insufficient meats at home, and prepare meals that have little or no animal protein. Adequate protein nutrition is required to reduce obesity and maintain good health in humans.

“Children especially need meat to build skeletal muscle,” Wu said. “They are at a critical stage in their lives as their bodies continue to develop and mature. Without sufficient sources of protein, their muscle, bones and other organs will not develop properly, which will lead to health problems later in life.”

“Animal protein is generally more balanced in amino acid composition than plant protein, especially for children," he said. "If you look at some countries, children are stunted. They have primarily a corn-based diet. Corn contains so little amino acids compared with meat. When I see stunted children or adults in the U.S. due to limited or no consumption of animal protein, I feel very sad.

“Our country has the greatest abundance of protein, but some choose to live such an unhealthy lifestyle."