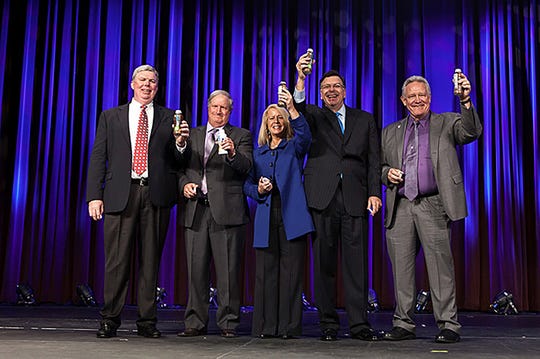 Recent articles in the Milwaukee Journal Sentinel and USA Today questioned the salaries of executives at Dairy Management Inc. (DMI), the organization that facilitates the dairy checkoff program.

The article states that in 2017, a year in which more than 1,600 dairies went out of business, IRS records showed that 10 DMI executives were paid more than $8 million, and pay for Tom Gallagher, DMI CEO, topped $1 million three times from 2013 to 2017. Gallagher’s pay exceeded that of those in charge of other checkoff organizations as well.

“I can certainly understand producer concerns, particularly at a time when we are in very difficult economic times for dairy farmers and for the dairy culture in general,” says Gallagher in an interview with MILK. “Anybody who has ever looked at compensation in any business, you compare the job you’re  looking at to comparable jobs in terms of budget size, impact and a number of factors. And that’s what our board does.”

In these volatile times several dairy producers expressed their concern over the story on Twitter:

“DMI does good work but they are too insulated from criticism and scrutiny in my opinion,” says @FarmerDave_Lane. “The pay is relevant to the industry, that’s how it stays high.”

“The board of DMI thinks everything is fine. Who the board actually represents is a good question for the small dairy to ask,” says @PiercyRyan.

Other producers said that salaries may be high, but they don’t believe the dairy checkoff is responsible for the state of the industry.

“Do I think the salaries are on the high side? Probably. Is DMI to blame for the low milk prices? Absolutely not,” says Brian Houin, owner of Homestead Dairy near Plymouth, Ind.

Gallagher defended the salaries, saying that the DMI board completes an annual performance appraisal based on set objectives and a salary review using salary data for comparable jobs. There are thousands of associations ranging in employment from four people to hundreds, Gallagher says, which makes it difficult to compare all of those together. The DMI board reviews this information and looks at comparable jobs to determine a salary based on where a replacement would be found for the CEO or other executives, he says.

“It’s very hard for farmers who are in these economic times to look at salaries and not question it. They certainly have a right to question it,” Gallagher says. “But they have to rely on the other farmers that are elected to these boards to look at the data and says, look, we’re competing with and working with the largest food companies in the world. If you want to do that, you have to have the people with the talent and decades of experience to do that.”

In addition, the USA Today article states that the dairy checkoff collects an inordinate amount of dollars compared to other checkoff programs. Last year, according to data in the article, total checkoff programs collected more than $895 million, of which $420 million, or 47%, came from dairy producers.  Also, when dairy, pork and beef producers are compared on a per-$100 basis, dairy farmers wind up paying a larger share of their revenue than their pork and beef producer peers.

While Gallagher wouldn’t comment on how other checkoffs are organized, he defended the contribution by dairy producers as a way to protect dairy’s role in a $200 billion global marketplace.

“When milk leaves the farm, we are the farmer’s only voice in the marketplace to get the industry to do innovative things, to do sustainability, to be focused on exports,” Gallagher says. “We’re that voice to get that done and we have been incredibly effective.”

Through the first half of 2019 domestic demand is up 3%, Gallagher points out, due mostly to strong butter and cheese sales.