How do you extend the fun of birthday week? Share it with family and friends. 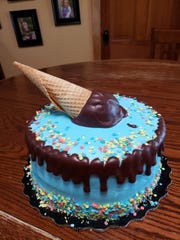 I have a cousin who celebrates her birthday month. That means she gets breakfast in bed for a month, or at least coffee served to her to start each day.

Bob and I hardly notice our birthdays and we certainly don’t celebrate for a whole month. This year my birthday fell on a Thursday. We celebrated by taking my books, painted tiles, and Rebecca’s copper trees to a booth at the Oneida Farmer’s Market. This day wouldn’t have been noteworthy except that it poured for an hour. That soggy day didn’t turn out to be a good birthday celebration.

Our children and grandchildren called, sent cards, and emails to mark my day. The best Bob and I did to celebrate was to go to lunch the following day at the Timeline Saloon & BBQ next to Doc’s Harley Davidson, Bonduel, off Hwy 29. Bob said that he had the best Ruben sandwich he’d ever had in his life. We’re both still bragging about our lunches.

A day later, Russell, Cynthia, and little Harrison drove out to the farm. They brought lunch and a birthday cake, which Harrison chose—a blue cake decorated with what looked like a fallen ice cream cone. That lunch turned out to be another yummy addition to my birthday week—Bob and I prefer lunchtime celebrations as heavy suppers don’t work for our digestions.

Anyway, while I was inside the house playing with Harrison, Russell, and Bob set up a new ‘toy’ Russ had bought for his family. When I did come out of the house, I thought they were stringing up an orange clothesline. 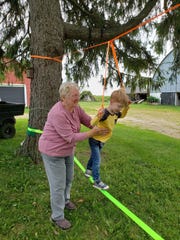 What they were doing was setting up a slackline. A slackline is kind of a wide tightrope that’s not tight. This one had a second line above the walker’s head that’s used for training—something to grab onto or hold on to when you can’t get your balance.

After Daddy Russ tested the line, Harrison had to have his turn. The line was only a little off the ground but I was afraid for the little guy. Harrison was a bit shaky when I was walking beside him. He bounced off the slackline once, but then he bounced back up again. There was no keeping him off that toy.

I watched Cynthia walk the line. She balanced on one foot, and let go with her hands. Russell also worked at a one-foot pose. Sometimes the adults bobbled and stepped to the ground. Other times they caught their balance and continued walking.

After seeing Harrison making his way down the line, I wanted to give it a try. It looked like so much fun.

Russell encouraged me to step up. I thought my weight would pull the two trees down, but he said everything was safe.

With our son at my side, I grabbed hold of the upper training line and put one foot on the slackline. It took a lot of effort for me to lift my other foot off the ground and set it on the line next to the first.

I thought I could slide down the slackline, but I couldn’t, not even an inch. Maybe that was because I was too busy laughing. 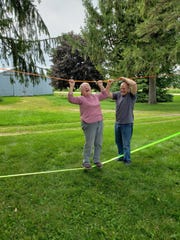 Susan laughs as she realizes she won’t be moving down the slackline. (Photo: Courtesy of Susan Manzke)

When I was back on solid ground again, my legs felt weak, even after that little effort. I guess it’s not a toy after all. A slackline is an exercise machine.

Anyway, I had another birthday lunch two days later. Rebecca and Andy made a campfire in our backyard and cooked pizza pudgy pies for our lunch. The following day, my lady friends met at Sissy’s for coffee and birthday cake.

It’s going to take me a while to walk off all the calories I got for my birthday week, but it was sure worth it.