Rock River Thresheree delights old and new tractor enthusiasts from near and far. 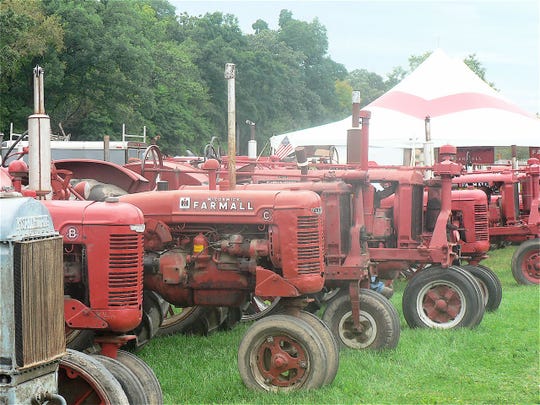 Although rain and fleeting storms were predicted for last Saturday by the weather experts, I took the chance and made the trip to the Rock River Thresheree a few miles south of Edgerton. Although my mechanical skills are minimal, I really enjoy looking at the legendary steam engines, old tractors and the assortment of ancient farm machinery on display at this annual event.

And, I’m far from alone in that interest as the size of the crowd at the “Thresheree” last Saturday would indicate. Shoulder to shoulder crowds filled the main walking path from the entry gate to the main show grounds when I arrived at about noon and the old tractors pulling wagons with seats were bringing people in from the far off hayfield parking lots.

If you’ve never attended an old farm tractor/machinery show – and there are many held across the state – too bad. These shows are where you can see the tractor you first drove as a farm youth or the tractors your grandparents and parents used every day as they farmed the “home farm” that you visited while growing up. Or if you were a lifelong city kid, see the tractors that were used to raise the food you ate as a youngster. 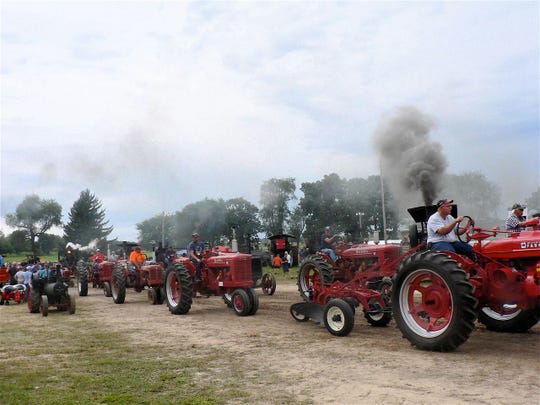 More ”red” in line for the parade. The smoke is from the “firing up” steam engines getting ready to go. (Photo: John Oncken)

The Farmall was the featured tractor at this year’s Thresheree and needless to say the featured tractor exhibit area was a sea of red. Farmall was a model name and later a brand name for tractors manufactured by McCormick Deering International Harvester (IH). The Farmall name was usually presented as McCormick-Deering Farmall and later as IH Farmall.

Farmalls were general-purpose row-crop tractors (dating to back 1923), a category that they helped establish. Most were all-purpose tractors with wide back wheels and one or two close together front wheels thereby allowing the operator to see the corn rows during cultivating.

They were affordable for small to medium-sized family farms and could do enough of the tasks needed on the farm that the need for hired hands was reduced and the need for horses or mules was eliminated. Thus Farmall was a prominent brand in the 20th-century trend toward the mechanization of agriculture in the US. 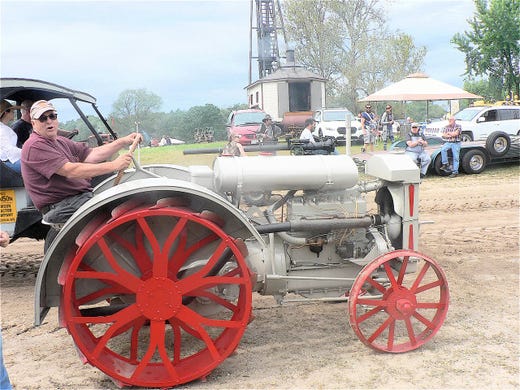 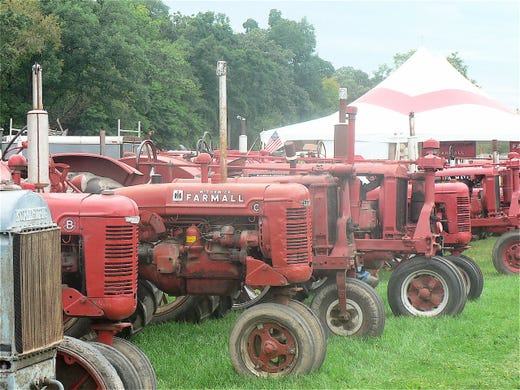 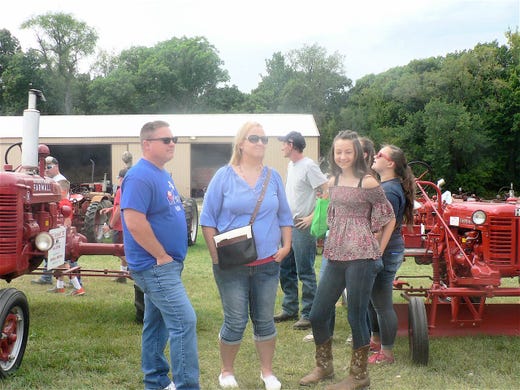 People of all ages enjoy tractors from long ago farming. John Oncken
Fullscreen 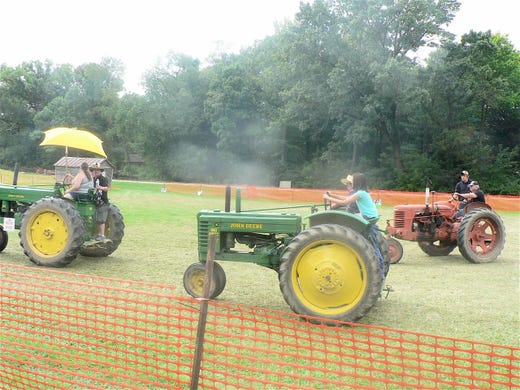 Free learning rides for kids or those who never before drove a tractor is a popular feature at the Thresheree. John Oncken
Fullscreen 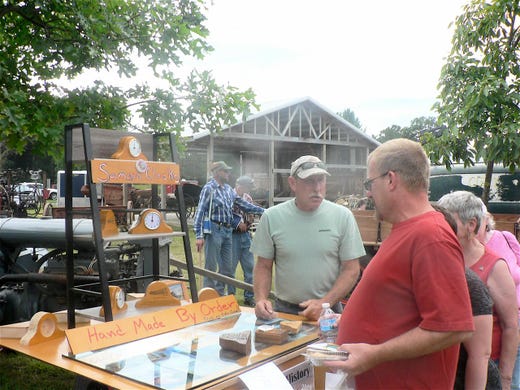 A vendor selling clocks he made from the wood wall of the former GM plant in Janesville. John Oncken
Fullscreen 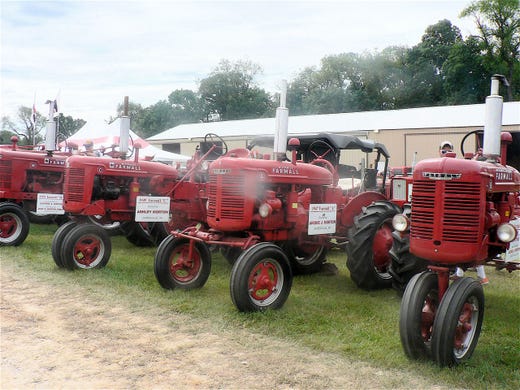 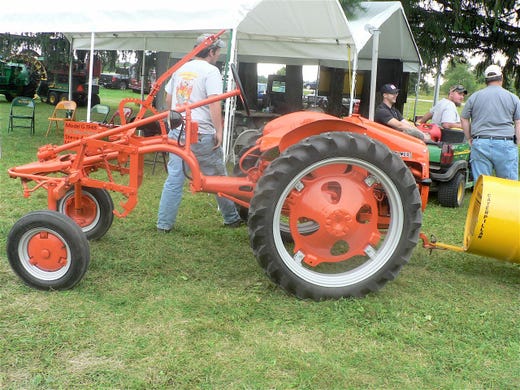 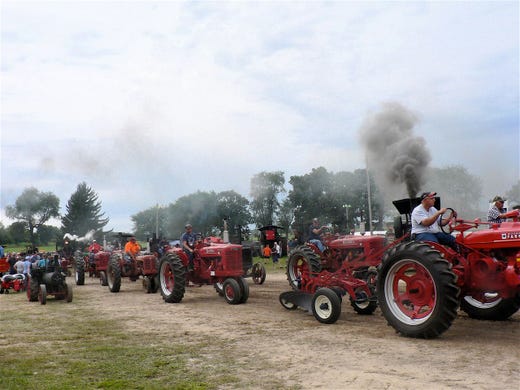 More ”red” in line for the parade. The smoke is from the “firing up” steam engines getting ready to go. John Oncken
Fullscreen 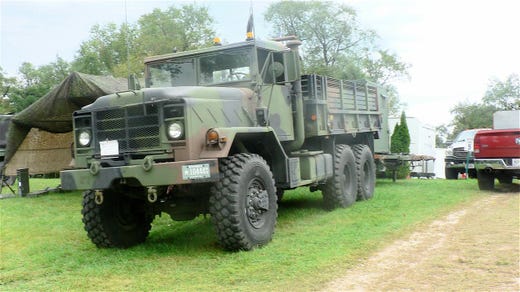 The Thresheree is now exhibiting history from the nation’s wars, like this deuce and a half truck. John Oncken
Fullscreen 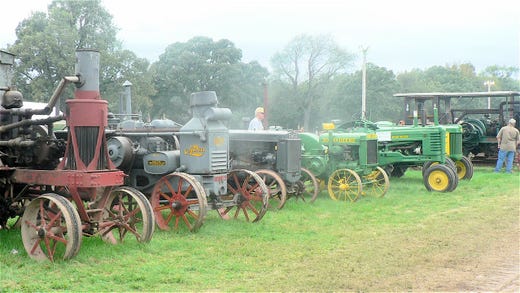 Whatever the make or color chances are you’ll find your tractor at the Thresheree. John Oncken
Fullscreen 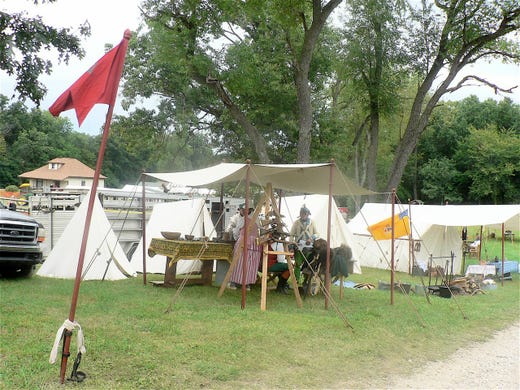 Reneactors from a long ago war were there. John Oncken
Fullscreen

During the 1940’s and 50’s IH Farmall pretty much dominated the farm tractor market with John Deere on the rise. Farmers classified themselves as “red” (IH) or “green” (John Deere) and arguments raged even within families as to which tractor was the best.

McCormick Deering expanded its product line into construction equipment, trucks, refrigeration and even milking machines. (Note : The first milking machine on the Oncken farm was an International.)  Along with expansion came management errors and internal bickering and by the mid-1960’s John Deere became the biggest selling tractor in the US.

The last Farmall made (after 5 million were produced) was in 1985 when Tenneco purchased all of International Harvestore except for their tractor production. A new company – CaseIH – was formed and some models with the red color are manufactured and sold yet today although you will still see IH Farmalls working on farms everywhere. Refurbished Farmalls are a common sight at the historic equipment shows like the Thresheree all across the US. 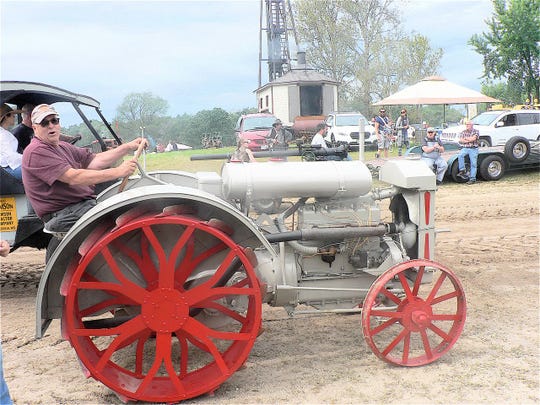 A secondary tractor honored at this year’s Thresheree was the Samson, a rather short-lived tractor that was made in Janesville a 100 years ago. As the story goes, in 1917, Henry Ford introduced the Fordson tractor which gained immediate popularity. The first 7,000 tractors were sent to England to aid in the War effort and were made available to US farmers the next year. The Fordson soon outsold the International Harvester Titan because of its lower price ($885 versus $1000).

Will Durant, chair of General Motors saw the success of the Fordson tractor and felt his company was falling behind the popular Ford Company in selling cars and was taking over the farm tractor market as well. In response, Durant bought the Samson Tractor Company out of Stockton, California, and brought it to Janesville where he had formed the Janesville Machine Company and began making Samson tractors in 1918. 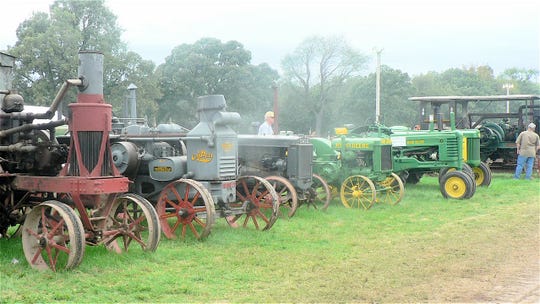 Whatever the make or color chances are you’ll find your tractor at the Thresheree. (Photo: John Oncken)

Durant also built thousands of Iron Horse motor cultivators in the late teens. The cultivators could be driven by a set of reins like a team of horses. The machines propensity to tip over, along with other faulty design features prompted GM to leave the farm equipment business and the manufacturing facility was converted to the assembly of Chevrolet cars and trucks which continued until the huge assembly plant was closed in 2009.

During my visit to the Thresheree, I sought more information regarding the Samson tractor and was directed to Steve Agnew of Milton. I found him seated on his 1920 Samson getting ready to embark on the daily power parade held on a lane through the natural amphitheater in the center of the grounds in front of an eager crowd. 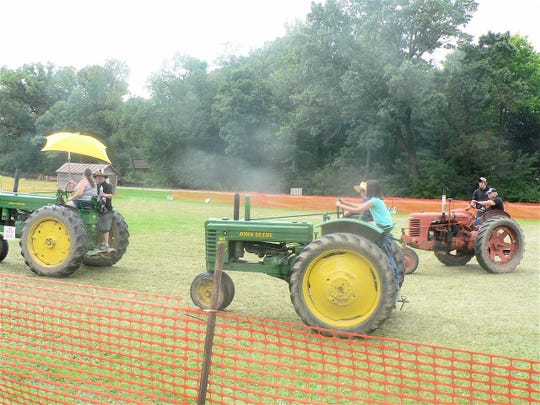 Free learning rides for kids or those who never before drove a tractor is a popular feature at the Thresheree. (Photo: John Oncken)

Agnew purchased the Samson in 2018 in Tomah and spent time in restoration and tuning the engine.

“It hadn’t run in five years,” Steve says.  After minor engine repairs the Samson was up and running.

Question: How many farm tractors being built today will still be running in 2119, a 100 years from now? Answer: We’ll never know. I’d guess it depends on the availability of computer parts and people to maintain interest. Will there even be tractors a century from now?

Agnew remembers that the Samson tractor was developed into the model tractor toy sold at the 2001 Wisconsin Farm Progress (now Technology) Days in Rock county. I also remember that model was made in Beloit rather than in Iowa as has have all the other model tractors sold at the annual farm show.

Modern in their day

As always, attending an old farm equipment show gets me thinking as I view the old steam engines, tractors and assorted pieces of farm equipment used in the past. Every single one of them has been replaced by something better and more labor efficient.  These old machines in square bodies with steel wheels and little power could plow more land than could a team of horses and brought farming into the era of mechanization but by today’s standards were primitive. Every year brought increased mechanization: rubber tires, hydraulics, power and implements designed for the tractor.

Those “good old days” when the historic farm equipment was new, were probably never as good as those not there at the time might believe, but those who lived them have memories never to be forgotten. If you are a lover of historic, restored farm equipment, view it at the many antique farm shows like the Rock River Thresheree. Enjoy it, imagine who used it, look at it as history and state of the art in its day—days that are long except for the memories.