Revisiting the Leedle family dairy and the robots

Eight years later, the Leedle family agree that installing robots and other technology has paid off in more ways than one.

Revisiting the Leedle family dairy and the robots

Some time ago, perhaps two or three years past while drinking coffee with friends after church, one coffee drinker, Lois Seymour asked about robotic milking of dairy cows, something she had heard about but could not imagine. Several of us tried to explain but didn’t do a very good job of it probably because it is a high-tech subject that is difficult for anyone to easily fathom.

As we ended the coffee drinking and talking, I explained to Lois that I knew and had written about a number of dairies using robotic milking and would take her out to a dairy farm where she could watch cows actually being milked with robots.  She thought that was a great idea and would love to embark on such an adventure.

The fact that I had not gone ahead for so long with my offer stuck in my mind (and bothered me a bit) until last Saturday morning when the perfect balmy summer day  prompted me to carry out the long-ago made promise.

I called Tom and Jennifer Leedle of  Black Cat Dairy near Lake Geneva who I had written about several times on these pages. It’s been nearly eight years since I first visited the Leedle family who farm near Lake Geneva. They had just embarked on a new venture – milking their cows with robots – rather than with the traditional milking parlor they had been using for their 250-cow herd.

Visiting the Leedle family is always a real pleasure and I've done it several times, so I called to see if – with just a couple hours notice – they would be willing to put up with two Saturday afternoon visitors.

“Come ahead,” Tom said.  “We don’t have any special plans for the afternoon. Come ahead."  I picked Ms. Seymour up at her home and off we went.

It turned out that Highway 14 east of Janesville was detoured and I figured I could get where we were going without following the suggested detour route. Bad move, and I got sort of lost on the country roads amidst the never ending cornfields of Walworth county and missed the country road where the Leedle farm was located. But, we eventually did get there.

Tom and Jennifer Leedle, parents of six children, farm about a 1,000 acres just north of the Illinois border. In the mid-2000’s they were milking 250 cows in a Double 8 parlor, in an old dairy barn with several additions. 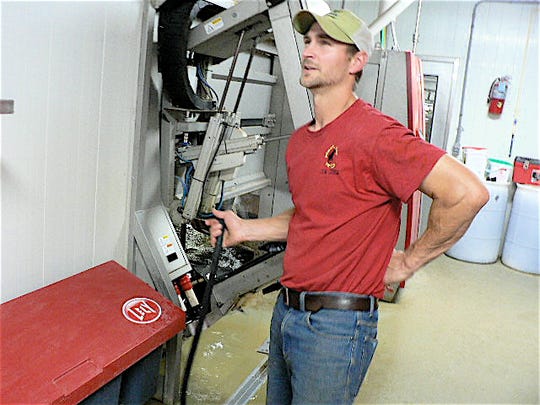 Son Jason rejoined the farm in 2007 after gaining a degree at the UW-Madison and the family realized that a larger herd was needed to support two families if the family dairy farm was to continue. "We were milking out of three barns that were tied together," Tom says. "The ventilation was bad and we were spending too much time in the parlor."

They also knew that they wanted to maintain a true family farm and not have a large force of hired employees that would require a major employee management program.

Robotic milking entered the family thinking and they began a serious and extensive research effort that resulted in the decision to use the Lely robot milking system and Argall Milking Systems, via the Lely dealer at Belleville. The old barns were not usable as robot locations so a new 234 x 232-foot cross-ventilated freestyle barn with Wieser Concrete slatted floors was built with two milking centers with four robots each placed in the center.

On Nov. 11, 2012 the first milking was conducted in the new facility and the Leedle family and their 480 cows had to learn a whole new milking and herd management system with built-in computer technology. And they learned it well! 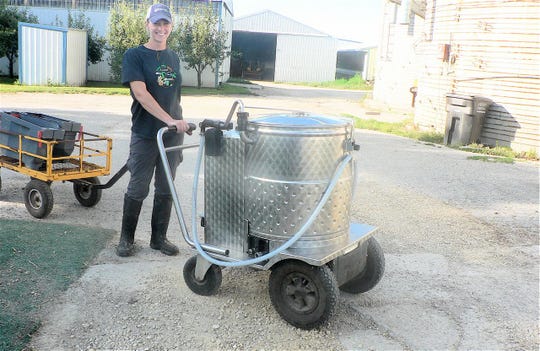 The Leedles gave Lois Seymour a quick and thorough overview of the robotic milking process while she asked questions and took photos on her iPhone. She marveled at the technology that enabled the robot to find the udder and teats, prepare them for milking, drop the teat cups when done and get the cow out while recording everything on a computer.

Jennifer Leedle also led Seymour to the calf barn where newborn calves start their lives: first in small single calf enclosures then to an open pack bedding area where they drink from an automatic (more high-tech) system.

Yes, the city lady was a bit astounded and amazed at the technology of robotic milking and 2019 dairy farming that she saw. Not unusual, I’ll admit. I see it on a regular basis but still find modern technology hard to believe and understand.

19 years ago and today

I well remember watching and writing about that very first robotic milking system in Wisconsin in the fall of 2000 at the Pete Knigge dairy at Omro and wrote:. "What's the future of dairy robotics and automatic milking in the U.S.? "...I can't say for sure... but, this initial effort will influence U.S. dairying mightily – one way or another." (That is the last paragraph in my column of Sept. 28, 2000).

The Knigge family still uses two new generation Lely robots to milk their 120 cows, 19 years later. And there are currently some 155 robotic milking systems with over 600 robots in Wisconsin with more being built.

Other dairies are also looking long-term with the installation of bigger robotic milking systems. Scott Argall of Argall Milking Systems at Belleville says 30 Lely robots are planned for the 1800-cow Miltrim Farms dairy at Athens. Eighteen are expected to go in this fall with 12 to follow next year. Yes, the dairy future seems to be saying “robotic milking."

Meanwhile the Leedle family is undergoing change: Son Jason is the herdsman and oversees the robotic system and the plethora of records produced. His wife Lindsay is much involved in herd management while daughter Kristin is taking over calf operations from her mother, Jennifer.

Son Ryan is more involved in feeding and field work and several grandsons help during the summer. There is also one full-time employee working in the barn.

One might say that it looks like the next generation is beginning to take over the dairy farm. True, that’s what the often-used phrase “passing on the farm to the next generation” is about. Tom and Jennifer Leedle had that in mind when they went to expansion and modernization a dozen years ago.

The robots have more than met the expectations of the Leedle family: the herd is still family operated; milk production is up and labor inputs lower.

“Is there anything you would have done differently.” I asked Tom.

“Maybe we should have put in 12 robots instead of eight.” he says. "But we went on what we knew at the time.” 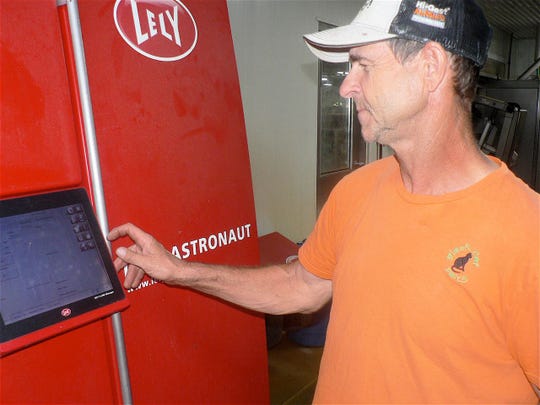 Tom Leedle looks at the robot readout to make sure the milk from a specific cow is being diverted before the tanker. (Photo: John Oncken)

And, the Leedle’s cows are still multi-colored as they continue, and are very pleased with their crossbreeding program of Holstein x Jersey x Swedish Reds.

“I like the smaller cow size and production,” Tom says. "And the manure still flows through the slatted floor and is pumped and injected into the soil once a year."

FacebookTwitterGoogle+LinkedIn
Revisiting the Leedle family dairy and the robots
Fullscreen 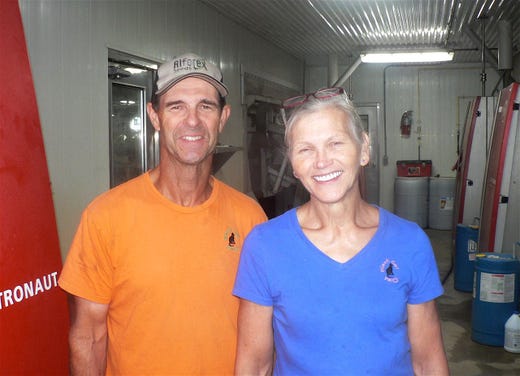 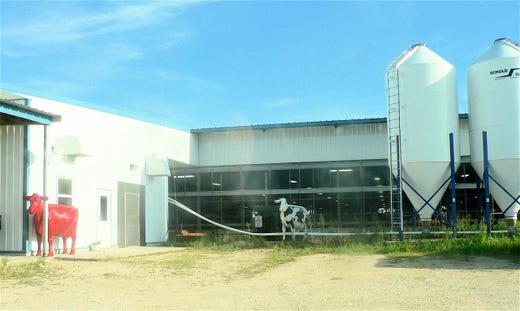 The curtains were up on the freestall barn. John Oncken
Fullscreen 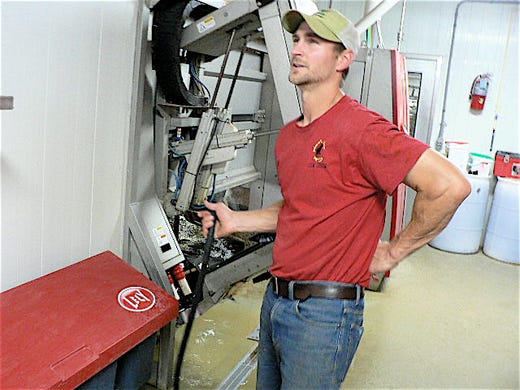 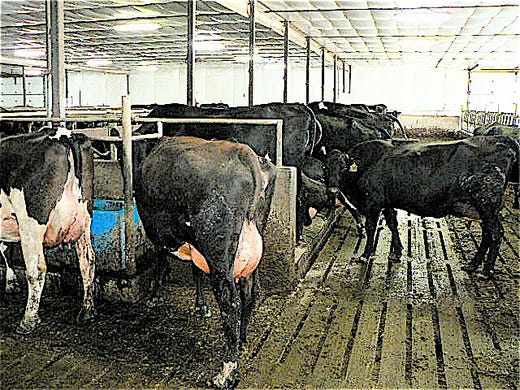 Cows get in line to be milked. John Oncken
Fullscreen 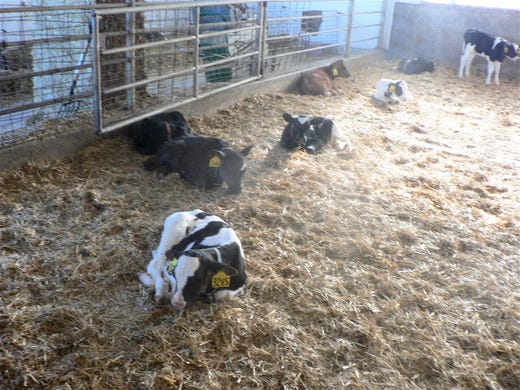 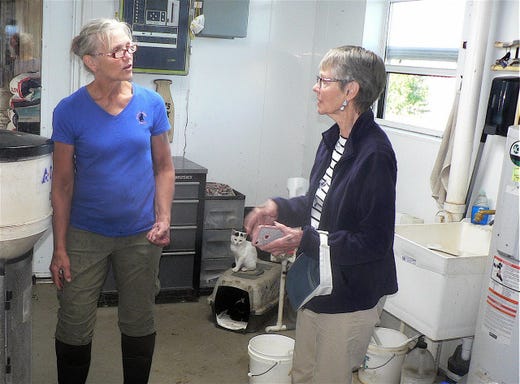 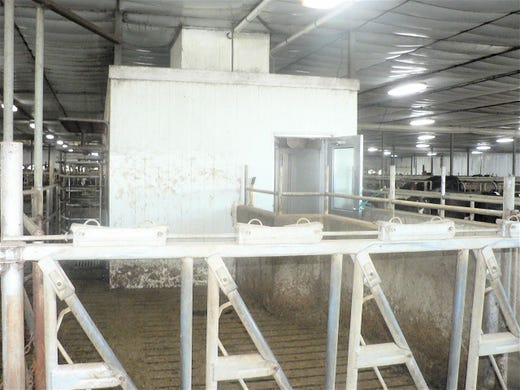 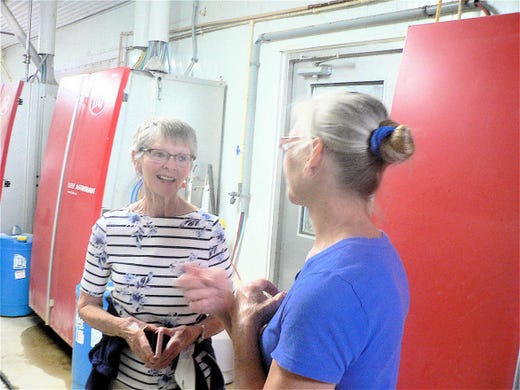 Tom Leedle looks at the robot readout to make sure the milk from a specific cow is being diverted before the tanker. John Oncken
Fullscreen 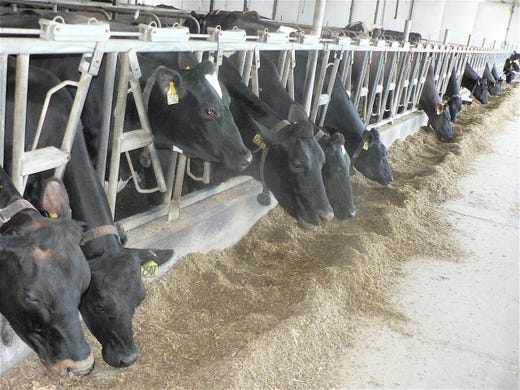 Every hour the feed is moved back to the manger closer to the cows by a Juno robot that circles the barn. John Oncken
Fullscreen 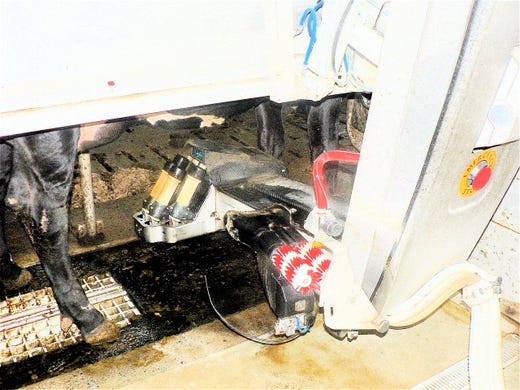 A cow about to be milked. John Oncken
Fullscreen

It was indeed a good day: nice weather, a great visit with a great farm family who took the time to again “show and tell’ and host Lois Seymour as she listened to, asked about and saw modern dairying at work.

I do wish the anti-dairy, animal rights, animal welfare groups would take the time and make the effort to learn about animal agriculture as it really is and see that dairy cows often eat better, live in better conditions and are cared for better than many people.  They might be surprised.