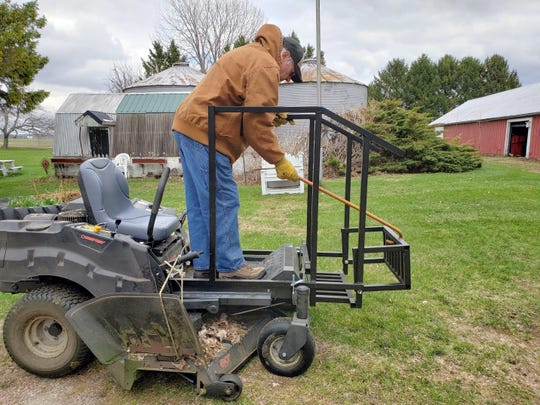 When our first toddler fell and bumped his head on the corner of a desk creating a lump the size of an egg, I became a worrier. And I haven’t stopped.

As our children went out to play I said, “Have fun, but stay safe.” Of course, that didn’t stop all the bumps and bruises that brought them back into the house for first aid.

These days, I worry about my husband, Bob. He’s able to get around more now. When his cancer returned this winter he was lucky to walk from one room to another. Now Bob can get out of the house on his own. For me that means trouble—sometimes he’s still a little wobbly.

Last Friday, he spent an hour and a half cutting grass. When he went out to get on the mower, I was coming to help him so I could lift the step out of the way.

“I can do it myself,” he said as he pulled up the step with the crook of his cane—a rope will be installed next time so when the step is up, it can then be tied so it won’t flip down when a bump is hit.

Yesterday, Bob was determined to get on his MF tractor. He had ideas of moving the remains of a deer far away from the homestead—our daughter, Rebecca, had raked the skeleton from under a pine tree in our yard before our Easter gathering. Together, she and her dad drove farther afield, but pooled water stopped them from going farther.

Anyway, Rebecca returned yesterday to give us a hand. “I never thought I’d be moving that disgusting carcass twice,” she said as she picked up a pitchfork. 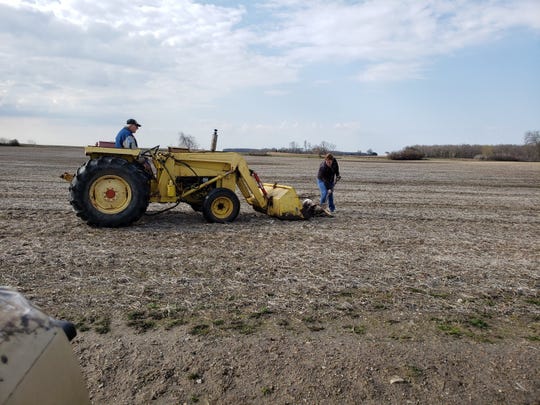 Rebecca nudging the deer into the bucket. (Photo: Susan Manzke)

Getting on the tractor was a bit of a problem, but Bob said, “I can do it myself.”

Rebecca and I stood behind him as Bob raised his leg to mount the tractor. He was able to get his foot in place, but he couldn’t pull himself up—all his strength hasn’t returned.

Rebecca set down a wood step for her dad and with that bit of help Bob was able to get on his tractor.

I had my camera out and tried to take a photo, but once Bob got the tractor rolling, he was too fast for me. All I got were partial photos as he rolled away from the buildings.

Rebecca and I followed behind the tractor in the cart. Though we thought Bob wouldn’t need help picking up the deer bones, it turned out Rebecca had to nudge it into the bucket.

Bob drove further down the lane and disposed of the bones—we still don’t know how that carcass ended up under our pine trees.

Anyway, Bob was happy to be up on the tractor seat again. He didn’t mind too much that I was there telling him to “be careful.”

Now when I tell Bob to “take it easy” his usual answer is, “Yes, Mother.” Of course, I don’t trust him and I make sure he doesn’t overdo it.

After he mowed the lawn and after he drove his tractor, his body told him to rest, which he did.

Now, on decent days, we can both be outside puttering around the farm and that’s a good thing. Still we take one day at a time.