Milking cows won’t have many long-term guarantees, but then what profession does?

Tom and Mary Heinze watch the cattle go, selling the cows to Mark and Beth in 2012. John Oncken
Fullscreen 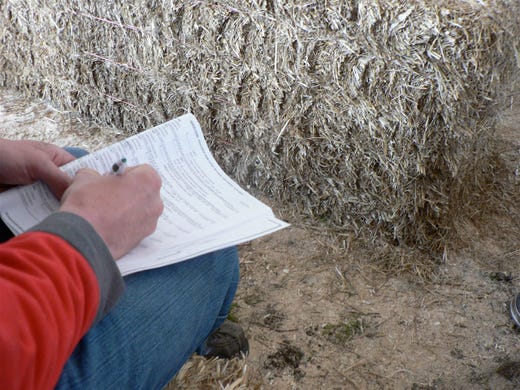 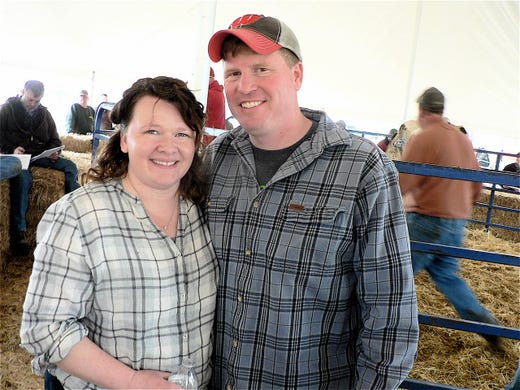 The 2002 built freestall may house beef cattle in the future. John Oncken
Fullscreen 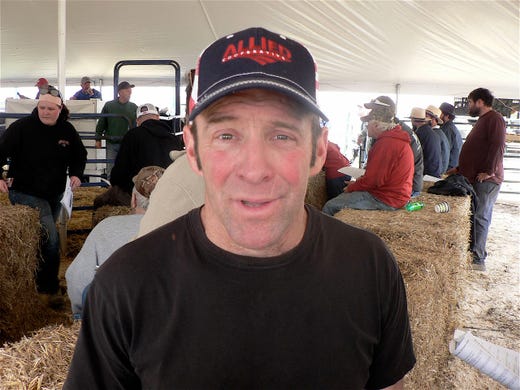 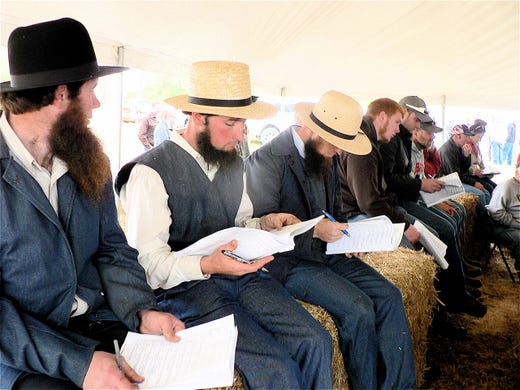 What to bid on is the question as the pedigrees and records are searched. John Oncken
Fullscreen

The dispersal drew a crowd from a far distance. John Oncken
Fullscreen 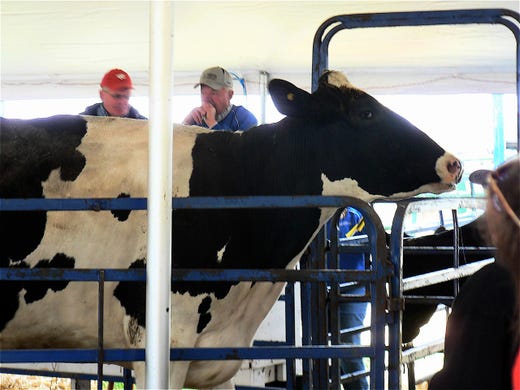 Much has been written, by everyone and anyone the past four years about the dairy dilemma: Too much milk with prices too low to make the economics work on many dairy farms resulting in too many farms leaving the dairy business.

So far, no one has come up with a cure-all answer nor has anyone found a law or rule that insures that a longtime farmer will remain a farmer (fourth, fifth, sixth generation or not) in spite of the economics. The only time I remember this happening was when in grade school where I read about the European kings who owned all the farmland in their kingdoms and had the low-class peasant farmers who owned nothing and were paid little if anything, doing the farming.

If and when peasant farmers returned to farm ownership, they did what farmers always do — produce more, better and easier as farming evolved and always grew in most every respect. There were good times and not-so-good times. I remember my dad who began as a dairy farm owner with his brother, both as teenagers, when their father died leaving them with the farm and a big mortgage. They were trying to make it as farmers during the Great Depression of the 1930s (and did). My father often told me, “You haven’t seen anything until you sell hogs at three dollars a hundred.”

I’m not sure how brothers, John (my dad) and George (my uncle) Oncken made it through those dark days of the '30s but they did and each went on to long farming careers.

I do know that they sold the big family farm (200 acres) and went their separate ways: My dad buying an 80-acre farm with a dozen or so cows and four acres of tobacco. He was able to raise my brother, sister and me (all who went to college) and eventually retired to Arizona during the winter.

In other words, change can be terribly bad or eventually very good depending on how it is handled.

Last Friday I attended the dairy herd dispersal of the 250-cow herd of Heinze Farm (sixth generation) at Portage. Dating back to 1872, the Heinze family made the hard move to leave the dairy business.

“Why are you selling out with a 90 pound average herd?” I asked Mark Heinze, who with his wife, Beth, had bought the herd from his parents, Tom and Mary in 2012. 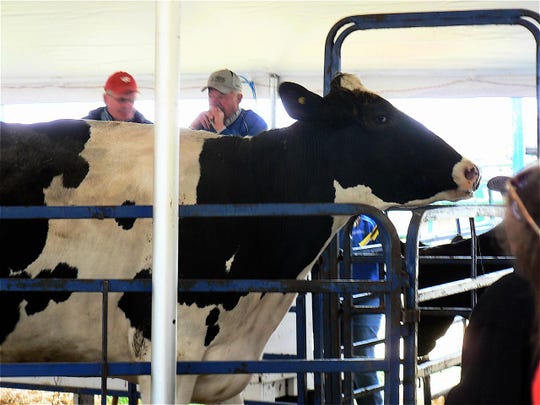 “You know the answer, John. You’ve been around dairying for a while,” Mark replied. “It’s the economics pure and simple.”

“We’ll continue to farm the 1,200 acres my parents, Tom and Mary, own and rent and I’d like to raise some beef steers," Mark continued. “We have the feed and space. And, we still have a couple hundred head of cattle (heifers and calves) on the farm. And, if the price of milk jumps big time we can be back in the parlor in a short time.”

“Yes it was a nice day and we had a big crowd,” Stade said. “People came from Green Bay, Eau Claire, all around the state and from Illinois and Michigan, And this was an outstanding herd with over 40 cows milking over 30,000 pounds and current bulk tank average over 90 pounds and a low SCC test. “Milk quality and production still count,” Stade said.

So, who is buying cows these days?

Greg Lohr was one who bought. About a year ago Lohr moved his herd into a new freestall barn with four robots. He ended up buying four head at about $1,300 each.  “This brings me up to about 230 cows, just about what I need for the four robots,” he said. "The robots are great and we’re averaging about a 10 pound/cow milk increase.” 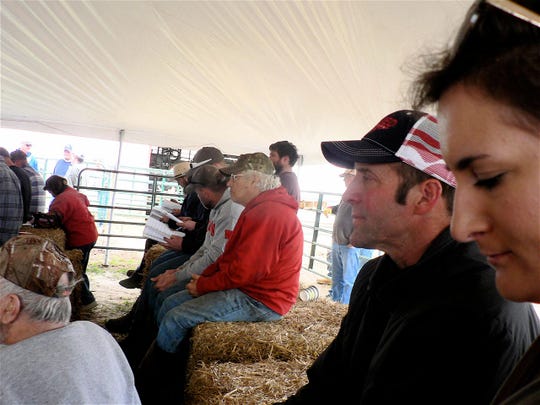 The dispersal drew a crowd from a far distance. (Photo: John Oncken)

Greg asked if I might have a son by name of John who attended UW-Platteville. “If so, I attended classes with him.”

Of course, I do and that was him at UW-Platteville. And I will write a bit about him next week as his John Deere business also changes.

I also talked briefly with three Amish dairy producers from the Pardeeville area who were waiting for the dry cows to come over the auction block. Why dry cows, I asked Stade? “Lots of farmers like to buy two for one,” he says. “You get a fresh cow and a calf.”

I watched part of the auction while talking to Mark, Beth and his parents, Tom and Mary  Heinze, and all agreed that the prices being paid were rather good and fair considering the state of dairying, saying they were "happy.”

While reading the auction notices in the Wisconsin State Farmer a couple of days earlier, I noted the 250 head being sold at Hide-Away Acres near Greenleaf also on May 3.

Out of curiosity, I called Leonard Yoap of Yoap & Yoap Auction and Real Estate who conducted the sale. 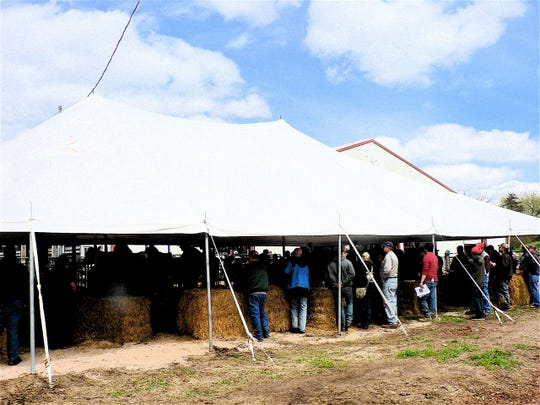 “Probably a matter of timing, I’d guess. Milk prices are up a little, leading to some optimism among producers,” Yoap concluded.

Yes, dairy herd dispersals continue across the state and many lives will be permanently changed. And, in contrast to what one might gather from reading some of the sad stories being published in newspapers, magazines and social media, not all will be horrific change.

Consider this: some farmers are farming out of perceived “family duty” and may welcome a change; some have college degrees that will get them into professional employment in places they may find enjoyable; and some working spouses may welcome their incomes going to family living rather than to feeding cows. Change itself may be refreshing and even life-saving.

Consider also: Even if milk prices zoom upward, they will no doubt drop again in the future. Dairying will continue to be an honorable and profitable profession for those with management, financial, business and people skills as it always has been.

And, as always, milking cows won’t have many long-term guarantees, but then what profession does?

John Oncken is owner of Oncken Communications. He can be reached at 608-222-0624, or email him at jfodairy2@gmail.com.