Spring plans are in the works at Sunnybook Farm

A reader's plans along with the mechanical wizardy of Bob and Susan Manzke's son may have Bob out and about on the mower soon.

Spring plans are in the works at Sunnybook Farm 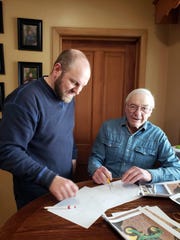 It may still be cold and muddy outside, but spring plans are in the works on Sunnybook Farm. Oh, Bob isn’t planning on jumping on a tractor…yet, as our farm is rented for the 2019 season. His best chance to work outside this year is mowing lawn around our farm.

As I mentioned in a previous column, my husband loves to mow grass on his zero-turn mower. He especially likes when the weather is perfect and he doesn’t run out of gas—our current mower doesn’t have a gage that reminds Bob to refuel. He assumes he can go all day without a pit-stop. Good thing we have cell phones so he can call me to run out with a can of gas.

It wasn’t long after that column came out in the newspaper we got an email from a reader, Roger S. This helpful man said that he had medical issues in the past that made it too complicated to get on and off his own zero-turn mower.

Roger not only wrote about his solution, he also sent a number of photos, showing what he had added to his own machine. Now he has a grab bar in the front of his mower so he can get on and off safely.

Of course, we were impressed with Roger’s effort to help Bob get out of the house and working again—winter was just too taxing in more ways than one this year.

I forwarded Roger’s email to our son Russ so he could see what another farmer had accomplished. Russ, being a mechanical engineer, had all kinds of ideas of his own.

When Russ visited us, he and Bob sat down with pencil and paper, ready to make their own plans. Since Bob has issues with his hips, getting up and down off of machines has been a problem for many years. In the past, Bob added extended combine and tractor steps so he could mount them easily—these additions also helped me, as I have short legs. 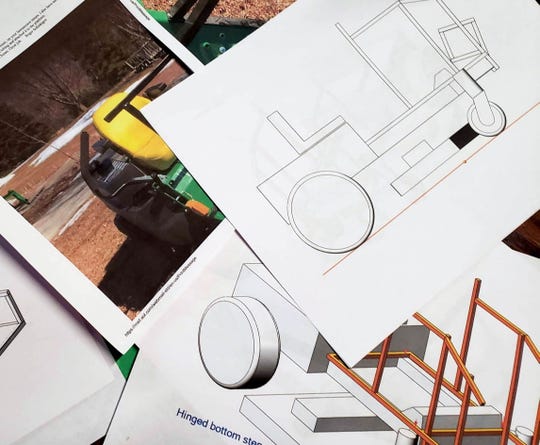 Russell measured the mower deck and returned to the table with figures. He again looked over Roger’s photos and came up with his own suggestions.

It was like old times watching Bob and Russ working over a farm project. Ever since Russ was a little bugger, he wanted to know how things worked, just like his Dad. I’ve always loved listening to those two make mechanical plans.

Right now Bob is resting. We had company both Saturday and Sunday. Visiting with family and watching grandkids play is the best medicine, but does tire a person out, even me.

Believe it or not, snow is on the horizon. Ugh! No one ordered that, but we will live with it until warmer weather is here to stay for a few months.

Our lives revolve around the times Bob takes his cancer medicine. He has to fast 2 hours before and 1 hour after taking his pills so he gets the best benefit from them and we won’t fiddle with that schedule.

Life may be different for us but we still find time to hug family and laugh together. Getting mail or email from readers continues to lift our spirits. Thank you all and a special thank you to Roger S. Your email was more than helpful.