Cutting down a tree was hard work, but on the positive side, it kept one warm on a chilly, winter morning. 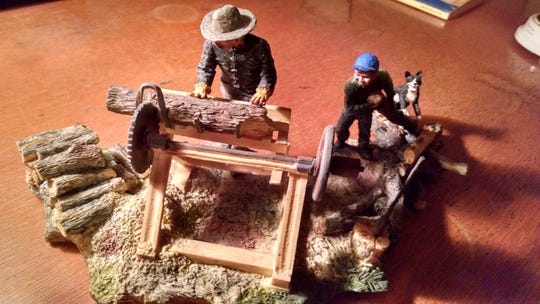 Cutting down a tree was hard work, but on the positive side, it kept one warm on a chilly, winter morning. (Photo: Jerry Apps)

With the snow piles ever taller and the wood pile ever shorter, it was time, as Pa would say, to “shoulder our axes and head to the woods for more fire wood.”

We’d hitch the team to the bobsled, and plow through the snow in search of a dead oak tree or two. It was a bit difficult for me to tell the difference between those trees alive and those dead . To me, they all looked the same in winter. But Pa could tell the difference.

Soon I was on the other end of a crosscut saw—Pa had first notched the tree with an ax. There were no fancy gasoline chain saws in those days. Cutting down a tree was hard work, but on the positive side, it kept one warm on a chilly, winter morning.

With the tree down, the next step was chopping off the smaller branches with an ax, and sawing the larger limbs with the saw. Limbs of any size we loaded on the bobsled, and hauled them and the trunk to a place near where the mostly diminished wood pile stood.

After three or four loads, Pa would announce, “That ought hold us until Spring.” He then got on the party-line phone to the neighbors and invited them over for a wood sawing bee. They used a circle saw, much like the one pictured above. It was a loud, dangerous operation especially for those working closest to the saw, as there were no safety guards.

After a few hours of wood sawing, the wood pile had once more reached a respectable size. After an early supper, the neighbors returned home, and we were left with the job of splitting the larger pieces into manageable hunks. Not the worst job on a cold, late winter day.

Jerry Apps, born and raised on a Wisconsin farm, is Professor Emeritus at the University of Wisconsin-Madison and the author of more than 35 books, many of them on rural history and country life. For further information about Jerry's writing and TV work go to www.jerryapps.com.