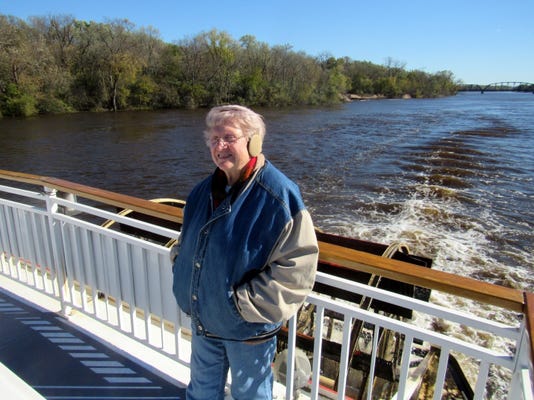 Bob and I finally found time for a vacation. Well, some people wouldn’t call it a vacation. What we did was take a one-day bus trip with Nationwide Travel. With 50-plus people, we hopped on a motor coach in Appleton and headed across Wisconsin to La Crosse and the Mississippi.

On other bus trips, I’ve often wanted equal time in the window seat. This day I didn’t. I knew how much my husband Bob loves looking at farm fields as we drive. For the bus excursion, I let him enjoy the view as I relaxed and looked over his shoulder—for me it was just enough that I didn’t have to do the driving.

Some people on the bus read as we crossed the state. They didn’t seem as interested in the fields as we were. Bob compared the fields as we rolled along. Unlike most Octobers, there was much to harvest—the cause for the harvest delay is attributed to wet weather, as we who are waiting for a long dry stretch can attest to.

The view out the bus window didn’t let us down. We actually got an extra good look at farm country as the bus driver had to take a detour. This brought on a few miles of country blacktop and right up close to those unharvested fields.

The day started out gloomy, windy, and cold. The cloudy sky wasn’t in the forecast, so we were disappointed. Suddenly the clouds parted and we drove through bright sunshine. A cheer went up on the bus, only to subside as the clouds closed in again. Lucky for us, as we rolled westward the sun returned to give us a bright afternoon.

We disembarked and then boarded the paddle boat, the La Crosse Queen in LaCrosse for our three-hour tour of the Mississippi. On board, we had a yummy lunch inside the enclosed lower deck. 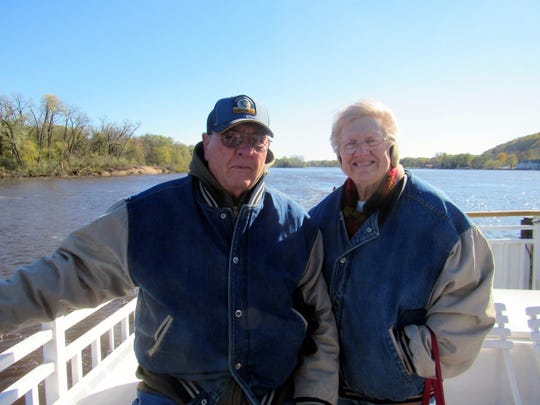 Bob joins Susan on deck as they cruise the Mississippi River during a fall excursion. (Photo: Susan Manzke)

Bob said he was comfortable and would stay where it was warm. Of course, after lunch, I had to head to the open upper deck. It was the best place to take photos.

I did bundle up before heading out. In addition to a sweatshirt and jacket, I added a wool scarf and ear muffs.

At first, I thought I’d only be outside a short time. The wind was wicked and chilled me to the bone at first. I then wandered out into the sunshine and found it wasn’t so bad, in fact, it was rather exciting.

I couldn’t let Bob miss out on the outside part of our boat ride and went down to encourage him to join me. He did and we spent the rest of our ride outside.

We got to see trains cross a bridge before the bridge swung open and allowed the La Crosse Queen to continue north. 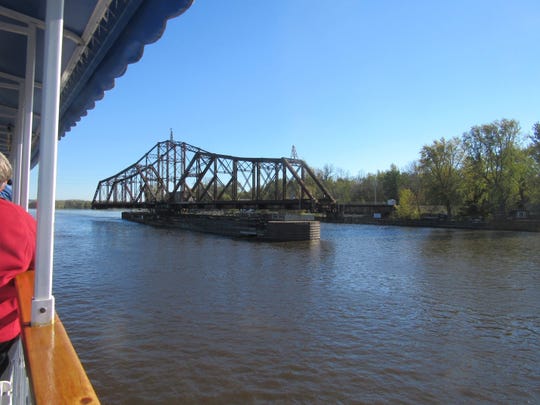 A swing railroad bridge opens to allow for the passage of the riverboat LaCrosse Queen. (Photo: Susan Manzke)

Eagles circled high overhead. I tried to snap a photo of that regal bird but I thought I missed it—after I got home and viewed my photos of the blue sky I saw that I had a photo of an eagle. Too bad it looked like a dark dot in the blue.

The ride back downstream was faster as we went with the current and the north wind. Bob had hoped to see barges filled with grain moving on the river. Too bad the recent rains had raised the water to flood stage and all the locks and dams were closed.

After a supper break on the bus ride home, I got the window seat. By this time, it was dark, so Bob couldn’t see the fields. Still, three times during our drive home, we saw lights from combines, trucks, and tractors. Someone was lucky enough to get some harvesting done.

The day was long for us. We had gotten up at 5 a.m. and were home by 10 p.m.. It was a quick trip as bus rides go, but a good one. We’re considering a longer trip next year. Maybe three whole days.