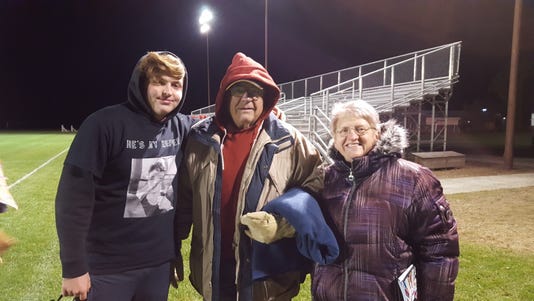 Grandson, Ethan, with Grandpa Bob and Grandma Susan after the game.(Photo: Submitted)

I’m envious of friends who have grandchildren near at hand. They easily can attend school activities and watch their grandchildren. We have many miles to attend games for our grandchildren and often have missed events and games.

The Thursday before last was different. We were finally able to attend our grandson, Ethan’s, varsity soccer game. It was senior night, so that made the game all the more special as Ethan will be graduating in the spring—Ethan attends Stevens Point Area Senior High (SPASH).

Grandpa Bob and I made plans to meet part of the family for a quick supper before the game against Merrill. Time sped by as we tried catching up with our son, Rob. Soon we were at the Portage County Youth Soccer Complex. We had been there before but not seated in the bleachers, under the lights.

Daytime soccer events on the distant fields started years ago when Ethan was a little bugger. I remember watching him play on Saturdays when he was five, or maybe younger. Those playing fields were only a fraction of the full soccer field we saw that night. All the little players back then had to be coached on how to kick the ball and which way to go to make a goal.

I’ve witnessed when some little ones sat down in the middle of the playing field when disgusted. Others cried and ran for their parent—but not Ethan. Some players bumped into teammates like bumper cars. It was always fun to watch the little ones play as they learned the game. We got a lot of laughs out of those events. No one kept score—well, some people on the sidelines did, but no goals were recorded. It was a learning event. 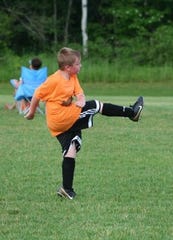 As the years passed, Ethan continued to play and improve his soccer skills. Eventually, he found his way to being goalie. Keeping the ball out of the net was his game challenge—years ago, one tough play left him with a broken bone, yet after he healed he returned to playing goalie.

Bob and I have always been proud of our oldest grandson, on or off the field, win or lose. Too bad his high school games were always so late on weeknights. Thursday’s game started at seven. We didn’t plan on staying for the whole game. The hour and a half drive home wasn’t a choice drive for us. First, it would be dark and maybe rainy. Also, it was past our bedtime.

We bundled up in winter coats for the game. Luckily I brought a blanket to sit on, too, as those metal bleachers were mighty cold.

I didn’t actually recognize Ethan when the team walked onto the field. Good thing his goalie shirt was purple and made him stand out from the rest.

The first half of the game had a different goalie for SPASH on the field. We wondered if Ethan would even play—we knew we’d see him some as they would introduce seniors at halftime—we loved seeing him recognized as a senior. 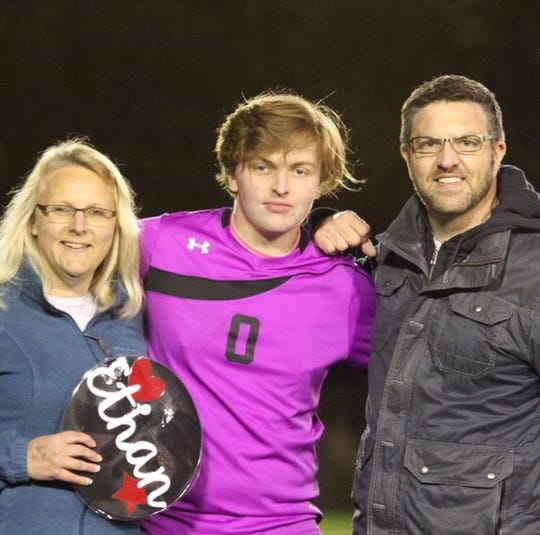 Ethan with his parents, Amanda and our son Rob. (Photo: Susan Manzke)

When the players took to the field after halftime, Ethan was in the goal. He looked so small from a distance—though I know he’s taller than Grandpa Bob.

The SPASH Panthers were quite the team to watch. They played as a team getting the ball down the field. I only bit my nails when Merrill took the ball back toward Ethan. Yet I didn’t have much to worry about—once Ethan had to kick the ball back in play and did a miss-directed kick to keep Merrill off guard.

SPASH Panthers won the game 2-0 and we stayed for the whole game, getting home just before eleven, way past our bedtime but well worth it.

Yes, we were cold and tired after the game, but seeing our grandson play made the evening extra special. I hope we’ll have many more events to attend for all our grandchildren. Cheering them on is the bestest fun.