Dairy Expo: Over the years

Dairy Expo: Over the years

The rotating globe is the meeting place for many. It consists of two metal silo roofs welded together and dates to 1969.(Photo: John Oncken)

World Dairy Expo long ago achieved worldwide fame as the gathering place for the dairy industry. It’s where the top dairy experts and top cattle assemble for five days of exhibiting their products, attending seminars, participating in and watching cattle shows and, in modern terms, networking.

The big event is again close-by on Oct. 2 - 6 at the Alliant Energy Center and will again draw visitors from Wisconsin, across the nation and around the world.  This in spite of  a depressed dairy economy in the US, extreme drought in Australia and dairy export battles between the US, Canada and China. (All subjects for another time.) 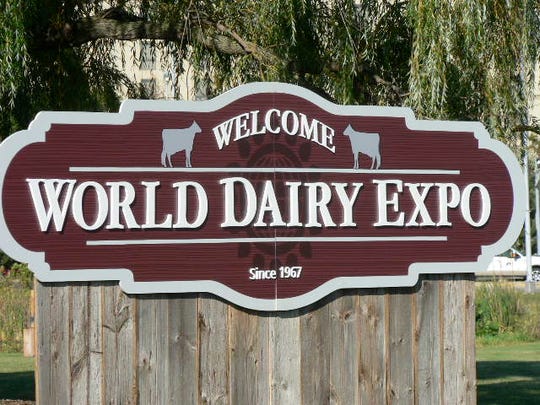 Perhaps you’ve forgotten the history of  this big dairy event (or maybe never knew it) but there has been a lot of water under the bridge and tons of manure scraped from the cattle barns over the past 51 years of Dairy Expo. Let me relate some of the things (mostly not known or forgotten by most) that stick in my mind.

Originally kicked off in 1967 as The World Food and Agricultural Exposition, the event was aimed at city consumers — even then farm folks thought that city consumers were eager to learn about food and farming. Apparently very few cared enough to attend and I remember wandering the almost vacant halls of the coliseum (I guess I, then a Clark County Ag Agent, attended either the first or second year, out of curiosity.)

After much pondering, planning and some major financial commitments the decision was made to reshape the event and feature dairying and appeal to a different audience - dairy farmers and the dairy industry. And, change the name to World Dairy Expo. 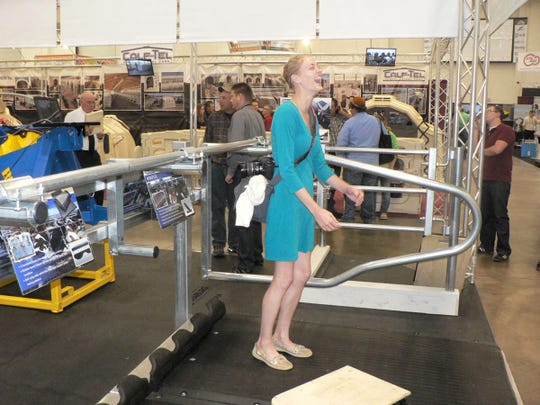 She’s not dressed for a physical workout but nevertheless enjoyed jumping on the cow mattress. (Photo: John Oncken, )

Over the years the commercial exhibits, some 900 this year, have moved from tents that seemed always cold, clammy and dark, to the huge Exhibition Hall with it’s constant temperature and bright lighting.

New cattle barns have been built but there are still tents (although of the high-walled, light filled and modern kind) for the dairy animals that can’t fit into the barns.

Success did not happen overnight, It took a few years for Madison city officials and merchants to realize that these visitors, often clad in flannel shirts and blue jeans, had money and were very willing to spend it. I remember one Madison mayor who fell asleep at the Expo awards banquet. Not in recent years. The City of Madison now welcomes these visiting  folks, hailing from California to Connecticut to Japan, who fill the motels and restaurants and buy things as gifts or souvenirs to take home.

I’ve attended many (most) Dairy Expos, met thousands of people and watched the dairy industry change  over the years. While many things remain the same, there are new products and programs every year. Some things have remained clear in my memory years later, among them.

-- The banquet of 2,000 people held in the then new Coliseum 1970 (or thereabouts).  The entire floor was filled with tables. I believe this was the only one held. For many years large banquets have been a part of the annual Awards and Dairy Shrine programs and continue today.

-- The advent of 10 cent ice cream cones offered by Production Credit many years ago.  The ice cream cones continued under then BouMatic and various providers. Today big cones are offered by GEA with help from local FFA groups but the price is $2, still a great treat.

-- Stopping and talking with an exhibitor stuck — sort of alone — in the corner of the exhibit hall in 1994. I had not seen this company called Udder Tech before. There  I met Cheryl Mohn, a dairy farmer and Home Economics teacher from Lakeville, Minnesota who was selling specialized clothing to keep you clean and dry while milking. She thought there might be a market for such and was testing that with her first Dairy Expo exhibit.

And, there certainly was a market! Today Udder Tech is a standard name in the dairy industry and sells a wide variety of clothing used by cow milkers, veterinarians, A.I. technicians and many more. Yes, the cows are gone and husband Bruce now works in the company that markets internationally.

-- Did you know that Dairy Expo began as a 10 day event but went to five days early on?

The rotating globe is the meeting place for many. It consists of two metal silo roofs welded together and dates to 1969. (Photo: John Oncken, )

-- In 2002, the show moved back a day in the week, from Wednesday through Sunday to the ever-since Tuesday through Saturday. The commercial exhibitors felt that Sunday was mostly attended by city folks who were not potential customers and many cattle exhibitors wanted to get home for Sunday.

I do remember attending on Sunday in 2000, probably the best day I’ve ever spent at Expo.  I knew “Arnold”  from church where he often asked me about dairying, a subject near and dear to him as a former farm boy. For some years I had sent him a free copy of my Agri-Dairy Business Letter which he enjoyed.

Arnold had Cerebral Palsy, a disease he’d had since childhood and was mistakenly diagnosed as mentally handicapped. (That was prior to the medical skills of today.)  Although his mind was great, his body and speaking ability weren’t and he had spent many years in institutions.

At church that day so long ago, I mentioned to Arnold that Dairy Expo was ending that day. His reaction was that he really wanted to attend but had no way to get there.  Although I had other plans I said I’d take him and off we went.

Arnold spent much time looking at the new robot milkers on display for the first time and talked with company representatives at length. We slowly walked (he normally used a small electric cart to get around) the exhibit area and he looked, asked and learned.  At closing Arnold expressed his thanks and said he’d done something he never thought he’d ever do — attend World Dairy Expo. 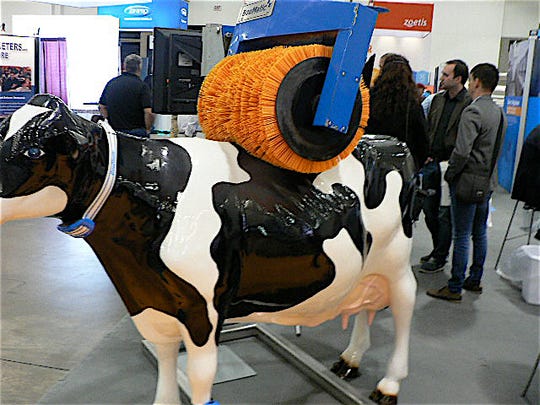 The invention that cows may love more than anything ever invented.  (Photo: John Oncken, )

Arnold died in a nursing home a few years ago in his early 70’s. No, I’ll never forget that day of happiness for Arnold (and for me).

Did you know that mature bulls were a highlight of early Dairy Expo competition?  All the big herds competing featured their herd sires. I remember Henry “Sonny” Bartel longtime auctioneer, sales manager and Holstein breeder leading a yearling bull at Expo in 2003.  He knew it was near the end of the bull classes and his days in the show ring.  Sonny died in August of 2005, the same year World Dairy Expo stopped offering bull competition classes.

“The last Holstein bulls (calves) were shown at World Dairy Expo in 2005, ending 38 years of bulls being shown at the event. Many a bull was sold overseas during that time thus financing a good part of the exhibitor’s expenses; but A.I. and safety concerns ended the tradition leaving nothing but “Fond Memories”. (Norm Nabholz  dairyman/historian).

World Dairy Expo will offer its 52nd edition in a few days, Oct 2 - 6.  The dairy industry is changing as will this great event over the years. Be there and enjoy.