A campout on the Manzke farm provides a fun weekend, despite rain. 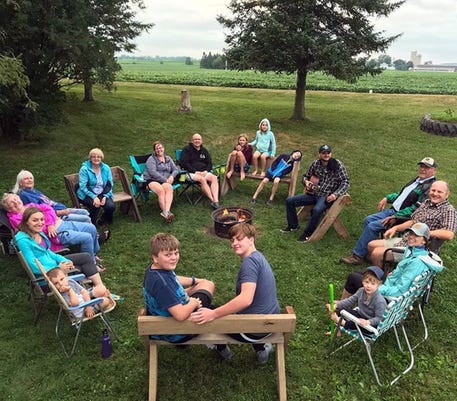 I’m going to attempt to share our family campout weekend. Plans for a Manzke outing actually began last summer. Instead of heading north for a lake house, I suggested everyone come to the farm to camp — that’s exactly what happened.

Rebecca and Andy arrived first, with their granddaughter, Serenity, 10. Rob came soon after with Ethan, 17, Seth, 14, Aryana, 6, and Caleb, 8, — Rob’s wife, Tara, had a big event at her shop, Bria Bella and Co, and was the only one unable to attend. Eventually, Rachel and Dave came with Wyatt, 4, I had Eli, 8,  and Arianna, 8, in my custody at UW-GB’s Grandparent’s University, so the twins arrived with Grandma. Russell and Cynthia brought little Harrison (almost 4) to join the crowd — added non-camping participants included, my sister Karen, girlfriend Joyce, Bob’s sister Ginny, and Andy’s son, Matthew — two extra dogs, too. It was quite a crowd.

Everyone brought food, as each family had selected a meal or two to feed the multitudes. Packages were checked for ingredients as Wyatt has a peanut allergy. Anything even a little suspicious was quarantined.

The event started with a trip to Urgent Care. No, it had nothing to do with the peanut allergy. An unwise happening between brothers sent Seth to have his ear checked — drops and a future trip for another check meant our campout would still continue. 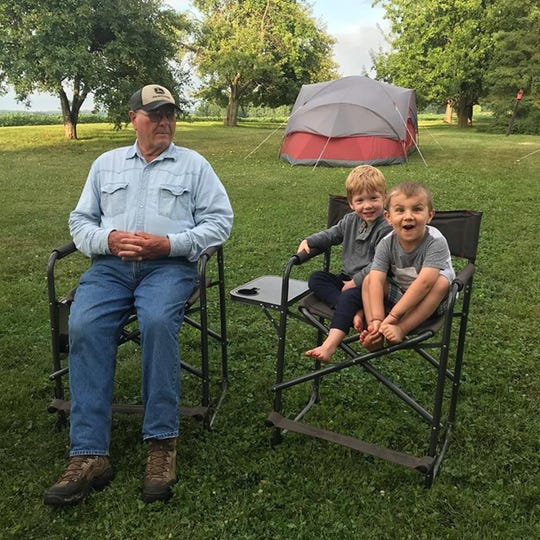 Grandpa Bob with Harrison and Wyatt wondering — Is it time for S’mores yet? (Photo: Susan Manzke)

I had volunteered to do the first meal: hot dogs roasted over the campfire. Too bad for everyone clouds arrived and so did rain showers.

As drops began to fall we ran for the house. Toys blanketed the living room floor as the youngest used Grandpa Bob’s old army men in some kind of game. Others sat on our enclosed porch. Some found seats in the kitchen and others went into the dining room — with a group like this I never knew where I’d end up and what conversation I’d join, but any place in the storm was good.

A campfire had already been lit, but it was up in the air if we’d get to use it that night. If the rain continued too long or too hard, I’d be boiling a batch on the stove — not what anyone wanted.

Eventually, there was a break in the rain — at least it was only drizzling and no one melted when wet, so we started bundling up all the necessities for supper and took everything outside.

Hot dogs were cooked over the campfire. Fixings were added to plates — even my homemade potato salad turned out great. Dessert wasn’t difficult. We had S’mores — after Rachel made sure all the ingredients were peanut-free.

Saturday some had to leave, but most of the group went to Seymour Lake. It was cool out, but still fun — except for a few mosquitoes.

All weekend long we dodged showers. From our campfire we’d watch the clouds and showers coming across our soybean field and when we began to feel raindrops we headed for the house again — sometimes the young grandchildren disappeared into the ‘kids’ tent’ where they would spend nights together. Mostly the younger crowd ran wild much of the weekend — only a few bumps and scrapes resulted, but no other trips to Urgent Care were needed, only an ice pack and a bandage.

With this Sunnybook Farm Camp, Bob and I didn’t pitch a tent. We were able to walk upstairs at the end of the day to our own bed — now that’s what we call comfortable camping.

Rachel and Dave made breakfast two days in a row. Cynthia and Russ did lunch. Rebecca and Andy contributed pizza Pudgie pies over another campfire. Our last lunch was a grab bag of leftovers.

Somewhere during the weekend, my sister fixed my coo-coo clock and took apart a 1910 clock that needed more than oil.

Our weekend went so well — except for the rain, but the crops appreciated every drop — there’s talk of doing a similar camp next summer. God willing that will happen and everyone will be here to enjoy all the fun. Fingers crossed.

FYI: Send a summer Christmas/holiday greeting to us (enclosing a loose postage stamp for a return greeting). You’ll then be entered in my new book give-away. The winner will receive a copy of The Growing Years 1988-1989 — drawing is the end of August.