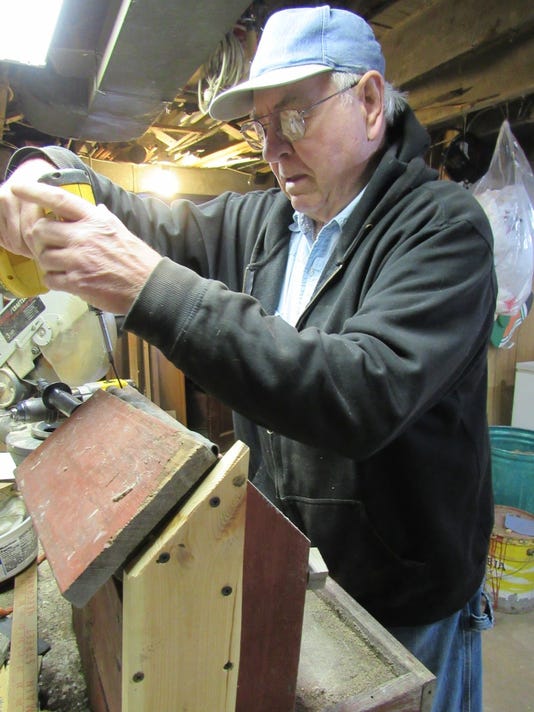 Our barn cats are not pets, not like cats who share the house with us. The cats that have found their way to our barns aren’t as fussy about the food we give them—Othello and Cruella often turn their noses up at our offerings—but all cats seem to keep us critter-free around the buildings.

The other night there was a problem outside. I had called and fed the barn cats on our front porch—I didn’t have to call loud because most were already there, even looking in the window, begging.

One nimble black cat ate its fill, but when a sparrow landed on a porch feeder the cat leaped up and grabbed at it. Lucky for the bird it missed. The cat had hold of the lip of the wood feeder and swung in the air for a minute. Eventually that cat worked its way up and sat on the homemade feeders, waiting for a bird to return to be its dessert. Of course, all birds stayed far from the feeder until that tenacious cat left its perch.

The following morning, all the bird feed was out of the feeder and in a pile on the porch. Bob and I wondered if the cat had returned and emptied the seed. It could have been an act of revenge.

The next morning, not only was the seed emptied, the whole feeder had been ripped off the post and was in pieces on the ground. A second bird feeder was also damaged, and emptied of its seed. 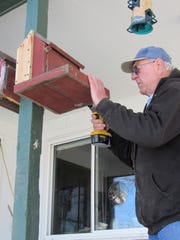 Bob and I analyzed the situation. Could that cat have leaped up there and brought down the feeder? Would its weight, swinging from the base, have brought it down? No matter, Bob took what was left to the basement where he patched them back together.

Over coffee, I told a friend about the situation. Bridget thought it could have been a bear. Of all the things that came into my mind, a bear wasn’t one of them.

Could it have been a bear? At first, I didn’t think it possible. Neighbors then told us that a bear had been seen in our neighborhood again. Oh my!

Bob, of course, wanted it to be a bear. He had wanted to see a bear here ever since they had returned to the area. It was time to set up his critter cam.

We didn’t have to take the infrared camera to the woods. As we set it up for our first test shots, it would go by the porch. But this time we hoped to get more than photos of barn cats. Bob had his fingers crossed for a bear—I didn’t.

The first night all we snapped were cats. Some had curled up on the outside bench and when they moved on, they said ‘cheese’ to the camera.

A real critter did eventually visit our porch, but it wasn’t a bear. It was the old raccoon who had come before. This mama had a patchy coat, so we recognized her. What came after she left, and was recorded in photos was a surprise.

Not one, but two other raccoons jumped on the porch from a different direction. These two, with their combined weight, could have easily taken down both bird feeders. There hadn’t been any cat food for them to nibble that night, still they kept looking for a snack. Luckily, they didn’t bring down Bob’s rebuilt bird feeders. After snooping around they left.

A curious raccoon visits the Manzke's porch while a barn cat and the couple's critter cam witness the activity. (Photo: Submitted)

I’m happy our visitors weren’t bears—Bob’s not. Now the problem is what to do about these night stalkers. I don’t want to venture out at night only to be surprised by these bandits.

Maybe as I step out of the door I’ll have to start singing or pounding on an old pot, or both, to scare them off. This invasion could only have been worse if it was a bear, but then I wouldn’t have to worry about going outside. I’d just send Bob.