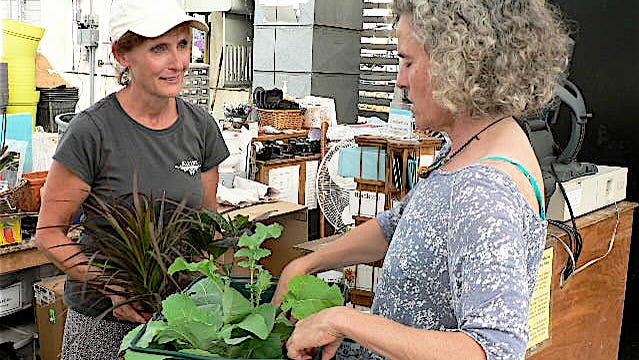 “I drove by and didn’t see the greenhouses and was totally shocked,” the women who was looking at potted plants said. “Then I saw the sign saying “open during construction” and found the new drive way and and parking lot and came in.”

What she was referring to was the demolition of much of the Klein Floral and Greenhouse complex on Madison’s East Washington Avenue last week. This is indeed a major change of scenery for the many thousands of people who travel that four-lane commuter pipeline once or twice a day.

Actually the tearing down still continues as a couple of Hydraulic Excavator Track Hoes continue to remove a few smaller buildings and pick up pieces with the historic old farmhouse the last to fall.

The 100 year old greenhouses came down to make way - not for apartments - rather, for a new set of greenhouses and offices that are the major part of a couple million dollar remodeling and upgrading of her Klein Floral and Greenhouse business owner by Sue Klein.

“It was the logical time to make this move,” Klein says. “The old greenhouses were not very good environmentally with heat loss in the winter, leaky panels and narrow aisles that made it hard for our employees and customers to move around and haul plants on carts.”

“I also expect one or maybe two of my sons will be joining the business and later on perhaps my third son and even my daughter may want to come in,” she says. "We’re planning that Klein Floral and Greenhouse will be a family business for a long time."

Four years ago, the company celebrated its 100th birthday, something not very common in the business world. Even more rare is that it has been owned by the same family for all those years.

Over 104 years ago, this little plot of land was located on the little traveled Sun Prairie Road connecting WIsconsin’s capitol city of Madison with the small farming community of Sun Prairie in Dane county. The East Town Mall, KMart (now HyVee,) Red Lobster and Office Depot were decades away from even being visions in anyone’s minds. Rather the area was about cows, crops and the horses who did the farm work and hauled people to and from.

In 1913 a young couple Frederick Klein (a German emigrant) and his wife Susan (an Iowa girl) moved to Madison and bought that 13 acre piece of land with a house, barn, chicken coop and a couple of greenhouses and began selling fresh produce. Lettuce, tomatoes, strawberries and perennials were raised on the portion of the property where the Hoffman House and Midway Motor Inn once stood and is now the site of a Walgreens.

It grew and grew

Over the decades the business grew: Other flowers were grown and flower arrangements were added to the business and in 1930, the Klein's started delivering floral products in a 1929 Model T truck — a pioneer effort in the city,

The family also grew to five children: Gertrude, Elizabeth, Helen, Walter and Oscar, all worked in the family business in their younger years.

Son Oscar, who served in the Marines during World War II and the Korean War, met and married Joyce Klopp, a Port Washington native (in 1954).

In 1955, Oscar and Joyce bought the business from his parents with Oscar running the greenhouses and Joyce in charge of the retail floral business.

In 1966, daughter Sue was born to Oscar and Joyce and literally grew up in the business, living in the house surrounded by greenhouses and making corsages at an early age. Sue graduated from Madison East High but continued working in the business after school and during vacation periods. She gained a Floriculture degree from the UW-Madison in 1987 and returned to work for her parents in the greenhouse.

In 1990, Sue Klein bought Klein's Floral and Greenhouse, becoming the third generation of the Klein family to own the business. Her dad Oscar died in 1993 and her mother in 1999.

Although the business has always been located at the now busy junction of Highways 51 and 151 (or Stoughton Road and East Washington Avenue), the original 13-acre business site is now about two acres in size and includes the area where the former greenhouses and farm house were located plus a series of growing greenhouses at the rear of the lot.

The growing greenhouses now serve as the retail area during the rebuilding. “These are much newer structures and will be connected to the new greenhouses, which they haven’t been. This will make things much easier especially during the winter,” Sue says.

Klein is also the mother of four children: James (24) and Jon (23) both who attended the UW-Whitewater, Michael (21) attending MATC and daughter Megan (16) at Waunakee high school.

How does a family-owned garden center exist in the face of a myriad of discount stores and supermarkets selling some of the same type products?

"We grow most of our greenhouse plants right here," Sue Klein begins. "Our competent and professional staff makes sure that all the plants are kept in top condition. We also sell a lot of unique plants."

"We are 75 percent garden center," she says. "We continue to grow most of our enormous selection of annuals, vegetables, herbs and perennials on site. Much of our plant product is grown from seed (including one of the largest selections of tomatoes, peppers and ethnic vegetables in the area).

Customers say the service they receive in selecting the right plant(s) for the occasion and how to take care of it from Klein employees is at the top of reasons why they return to buy year after year. “They know everything about every plant they sell,” a customer said in response to my question. “ If they don’t have an answer they ask Sue and she’ll know."

“Klein’s Floral is a comfortable place to look, learn and buy,” another customer said. “It’s so peaceful and pleasant and offers so many plants and flowers and everyone is so professional.”

The remodeling schedule calls for the 21,000 square feet of greenhouses to be completed early in the New Year with the office and retail space coming later. “It will be environmentally and service friendly,” Sue say. “It will be ‘state of the art.’”

Sue Klein is the consummate multi-tasker and entrepreneur combining ownership of a thriving business, raising a family of four children, involvement in a host of professional organizations and now overseeing a major construction.

I first met Sue on a 450-mile bicycle trip — her husband Darrel Larson was a long time rider (as was I) with the Wright Riders, a group that took annual summer trips. Darrel died too young as a consequence of back surgery when the boys were very young and Sue raised her family by herself.

Sue Klein is determined to stay on that 104 year family success track as she looks to the now and the future with enthusiasm.