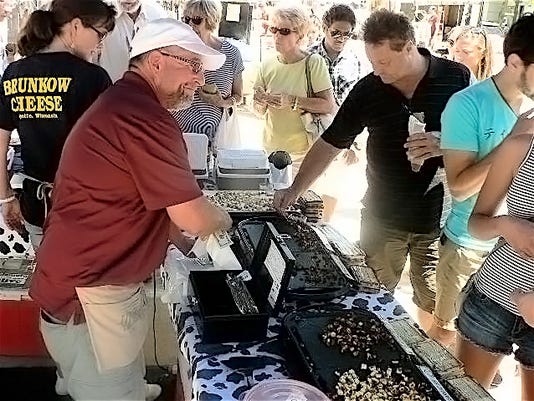 Brunkow Cheese owner Karl Geissbuhler offers his specialty cheeses at the farmers market, to the delight of all.(Photo: John Oncken)

“We came up from Rockford,” the young women with an armful of flowers said. “ I love the flowers. We don’t have a farmers market like this, so we drive up once in awhile to attend the Dane County Farmers Market in Madison.”

Not an unusual answer as I’ve found in my yearly once or twice visits to the Dane County Farmers Market held every Saturday morning from early April to early November.

The Capitol Square in Madison is normally rather quiet during weekdays with a few legislators, lots of attorneys and lobbyists in suits and an occasional school tours entering or leaving the Capitol.

Saturday morning is different - oh so different. Farmer-vendors begin arriving before 6 a.m. and the crowds coming from about 8 a.m. on with the peak  at 11 until noon. Note - It’s commonly perceived that the true buyers get there early and the sightseers fill the sidewalk from about 11 a.m. on.

Last Saturday I parked my car at 11:30 and joined the shoulder to shoulder throng across from the Park Hotel and began a slow trip clockwise around the Square.

My first stop was at a Hmong operated vegetable display featuring big piles of green beans that brought to mind my mother constantly telling us three kids to ‘eat your beans, they’re good for you.” I don’t remember what they were supposed to do for us - grow taller, run faster, live longer or what (?) but I finally got to eating and liking green beans many years later.

Originally from Laos, he farms 25 acres near Eau Claire and has been at the farmers market for 19 years. (Photo: John Oncken)

The family that runs the stand said they live in Sun Prairie and farm a total of five acres in DeForest and Cottage Grove. Five acres doesn’t seem like much to me, who often interviews farmers with hundreds and even thousands of acres, but  they make every acre count and do much of the work by hand.

The next vendor had originally came from Laos, farms 25 acres near Eau Claire and has been coming to this market for 19 years every week, making the two and a and half hour trip and getting to the Square before 6 a.m.

It was there that I noted boxes of little, teeny potatoes - something I’d really never seen before. As I continued my tour, I came upon another Hmong farmer offering boxes of these tiny potatoes with a sign “mixed fingerling potatoes - $3.00 a pound.”  I asked the vendor about these potatoes but he did not understand my English so I waited until I got home to learn more. 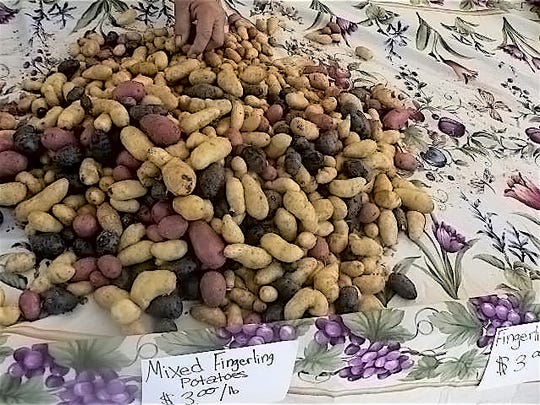 Wikipedia says: “A fingerling potato is a small, stubby, finger-shaped type of potato which may be any heritage potato cultivars. Fingerlings are varieties that naturally grow small and narrow.” So, now I know and I can’t figure out why I’ve never eaten or seen them before.

Of course I stopped at the Marr Family Farm booth where Jerry Marr was selling his “Grass Finished Beef.” Jerry, Nancy and family members have been selling their Angus beef at the Dane County Farmers Market since 1998.

The Marrs, who have a 256-acre farm in the hill country near Mineral Point, decided to get involved in direct marketing of their mostly pasture-raised beef in the late 1990’s. They realized they had little control of the price of the animals they raised and sold. They also knew their pastured beef was a plus for consumers seeking "natural" beef.

They sold at the  farmers markets in Fitchburg and Middleton before moving to Madison and the Dane County Farmers Market with coolers full of steaks, roasts and hamburger.  After 19 years of selling at the DCFM, Jerry said they are very pleased with the results. 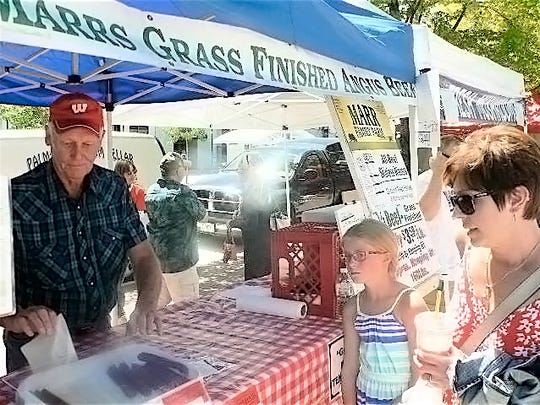 He noted that buying habits have changed over the years:  “Beef roast sales have decreased markedly,” he says. “In fact. many young people don’t know how to prepare a roast, even if they know what a roast is. Our best selling products are steak and hamburger - our customers know our meat is of top quality  and they come back again and again,” Jerry says.

He explains that his cattle are bought at the Bloomington Livestock Market at about 550 pounds, feed some corn in the fall and winter - “a little corn keeps them warm and comfortable,” are finished on pasture in spring and summer  and butchered at 1050 to 1200 pounds.

"We're at the farmers market for the advertising as the contacts we make here lead to later sales of quarters and halves of beef. Many buyers order by phone (608-987-2508) or email (marrbeef@charter.net)," Jerry says. “We’re in the process of setting up a Facebook page as an additional sales aid.”

Pecatonica Valley Farm is a family -owned (Todd and Amy Carr) farm at Hollandale that offers a variety of products ranging from eggs to chicken to beef and pork products. This smallish organic farm has offered their products at the market for a couple of decades and has built a strong customer base.

“Peter” from Madison says he first visited the family booth in 2000 and has been coming back ever since. “Great farm products, a great family and friendly people.”

Cheese for sampling and buying

There is always a big crowd at the Brunkow Cheese tent where the 118 year old,  family owned, Fayette based (near Darlington), offers cheese sampling to passers by.

Saturday the crowd was talking about and sampling a baked cheese patterned after Juustalepia, commonly enjoyed in Finland and Sweden. The cheese is baked to form a tasty crust similar to toasted bread and carries a mild buttery flavor. It's great as an appetizer (you can warm it on a griddle) which was being done to the sampler's' delight.

Brunkow Cheese owner Karl Geissbuhler say he has been selling at farmers market for many years and it is a good financial addition to his normal specialty cheese marketing business.

Many stories, one rule

Each of the 300 or so  vendors (about half appear weekly) at the Dane County Farmers Market has their own story, the only common thread is that sellers may offer only agricultural products that they themselves helped to produce, thus prohibiting the sale of clothing, art objects, crafts, animals and produce brought from other areas."

It all started in 1972 when Mayor Bill Dyke recognized a need to unite the city and farm cultures and provide a means for city dwellers to reap some of the county’s agricultural benefits. Inspired by Europe’s open markets, Dyke called on the Dane County Extension Office and the Central Madison Committee of the Chamber of Commerce to help him replicate the European tradition. The three agencies joined forces to develop the Dane County Farmers’ Market.

Dane County farmer Jonathan Barry  was hired as the first Farmers’ Market manager. He formed a grower advisory committee to help give some direction to the newly formed Farmers’ Market. and the rest is a history of success. The market is often portrayed as “The largest producer-only Farmers' Market in the country,“  not bad considering  there are currently almost 9,000 USDA-registered markets around the country.

John Oncken is owner of Oncken Communications. He can be reached at 608-222-0624, or email him at jfodairy2@gmail.com.