Apples for over a century

Apples for over a century 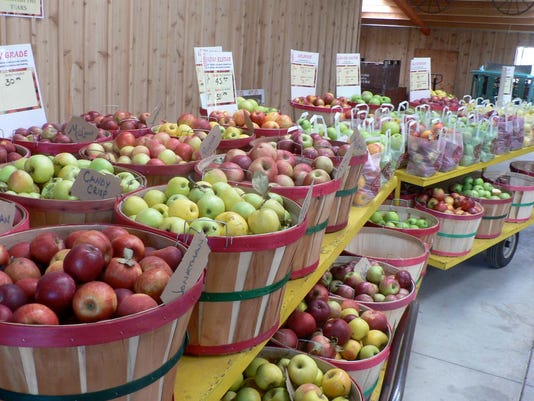 Fifty varieties of apples to try and buy.(Photo: John Oncken)

“An apple a day keeps the doctor away” was a favorite saying my mother repeated time and time again when I was growing up, and I guess she knew what she was talking about.

Although we never managed an apple a day, those we did eat seemed to have kept us well because us three Oncken kids were seldom sick, much less in need of a doctor.

Apples are unique. They're one of the best sources of pectin, a type of fiber research says “limits the cholesterol the body absorbs and may be an important link to preventing heart disease. Apples are a source of vitamins A, B1, B2, C and niacin as well as minerals phosphorous, iron, magnesium, iodine and potassium.  Also, apples are low in sodium, which means they help prevent infections, aid growth, are important for eyesight and help digestion.

What more could one ask?  Maybe that people on diets (who isn’t?) know apples have only about 80 calories per medium apple and are filling but not fattening.

Every farm had an orchard

Historians say apples were planted in Wisconsin in the very early 1800s, and for the next 150 years, most every farm had an apple orchard. Ours had maybe a dozen trees of three or four varieties that we eagerly awaited to ripen each fall — always to find worm holes in each apple that we had to eat around.

That’s pretty much all changed now. The old farm orchards have run their course and are just a memory.  Yes, one can often see an apple tree or trees behind the house on many of the vacant farmsteads across the state. Drive slow, look close and you’ll see them — remnants of the past and a different lifestyle.

Why maintain a farm orchard with all the upkeep when you can buy apples (without worm holes) at every grocery store or, better yet, at a commercial orchard?

The 300 (or so) commercial apple orchards in Wisconsin produced some 51 million pounds of apples on 4,000 acres of trees  last year — down about 5 percent from the previous year due to weather factors. About 125 orchards are members of the Wisconsin Apple Growers Association. Surprisingly, many of the commercial apple orchards in the state are well over a hundred years old and still family owned.

One that traces its origin to 1839 is the Ten Eyck Orchard just west of Brodhead in Green County. Owners Rob Ten Eyck, wife Annie and son Drew are the fifth and sixth generations of Ten Eycks to farm the land, which includes 40 acres of apples (50 varieties) primarily sold at the farm on Highway 11, the Dane County Farmers Market and West Side Farmers Market in Madison.

Ten Eyck Orchard in Brodhead has been around for a long, long time. (Photo: John Oncken)

Drew Ten Eyke, after graduating from UW-Madison with an environmental biology degree, is completing his first full-time year at the family orchard after working two years at Verona-based Epic Systems.

“I felt that if I was going to return to the orchard and carry it into the future, it was the time to do it, and I did," Drew said.

He traces the family farm history to 1839 when Jacob and Rachel Ten Eyck moved into a cabin on 540 acres they had  bought  (before leaving New York state) just west of the Sugar River near Brodhead.

When the wheat cropping began to decline in the state, Jacob moved to more diversified farming, including raising livestock, and gradually built the farm to 1,200 acres. Tragically, he died in 1876 after being attack by a bull.

Jacob and Rachel's grandson, Albert Moore “A.M." Ten Eyck, graduated from the UW-Madison in 1892 as a member of the first agronomy class. The family's written history said “with his first wages, he bought apple trees for an orchard on his father’s farm. So  began the orchard.”

A.M., while teaching in agricultural colleges in Colorado, North Dakota, Iowa and Kansas, had become interested in round barns and had one built on the farm in 1922. The family history said, “It was built from oak lumber cut from the farm property and our own sawmill and steam box to curve the boards. It is 60 ft in diameter with a silo in the middle that provides structural support, allowing it to age gracefully, and is beautiful in all seasons.”

The 1922 round barn is an historic site and is still in use. (Photo: John Oncken)

The historic Red Round Barn is listed in the Wisconsin Registry of Historic Places and still stands strong and sturdy. It is used for machinery and equipment storage after many years as the apple processing and sales area.  It is also the well-known landmark marking the orchard location to travelers on the passing highway.

A key player at Ten Eyck Orchard is Opal John, who started working there while in high school 15 years ago and is now the orchard manager in addition to selling apples and her Opalicious Honey to the many visitors.

“My family —  I was one of eight kids — ate a lot of honey,” she said.  “I was always fascinated with bees and worked with the previous beekeeper here and eventually bought him out. I have 35 hives right now but had 60 hives until last winter when parasitic mites hit. Our Opalicious Honey is harvested, extracted and bottled right here on the farm. “

Opal John has been an important employee and beekeeper at Ten Eyck since high school. (Photo: John Oncken)

“We grow over 50 varieties of apples as well as pears, pumpkins, squash, cider and honey,” Drew said.  “Honeycrisp is our most popular apple, with Zestar!, Macoun, Melrose, Holiday and Arlett, along with classics such as Cortland, Mcintosh, Jonathan and Ida Reds also in demand. We also raise unique antique varieties, such as Russet, Snow, Greenings and Winesap.

"Six generations ago, the Ten Eyck farm included 1,200 acres of land, but over the years, most of it was divided among family members or sold off. We now own 300 acres. There are 100 acres of cropland, 100 acres of woodland and the rest is orchard and farmstead."

“At one time, we had a lot more land in orchards," Drew said. "Trees were bigger and spaced farther apart, and we used ladders for picking. Now we’ve gone to dwarf, high-density plantings. It’s more efficient, requires less land and the trees, about 8 feet tall and close together, can be picked from the ground.

“People’s buying habits have also changed over the years. Years ago, they bought  a bushel or more of apples at a time for home canning. Nowadays, there are very few people who do that. Yes, we still have area Amish families who buy in larger quantities.” 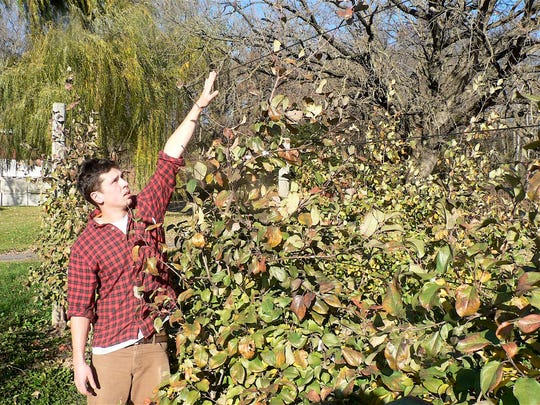 Drew Ten Eyck stands next to a dwarf apple tree that is now being planted in many Wisconsin orchards. (Photo: John Oncken)

Over the years, apple orchards have  become a “destination” for people who want a trip out to the country with their family to see where apples are grown and who is growing  them. At the same time, tasting different apples and making a selection are always interesting. Many orchards offer homemade baked goods, often including cider donuts, drinks (yes, cider) and a place to sit and relax.

"We had a pretty good year production-wise in contrast to many orchards across the state who were hit by a heavy May frost that damaged budding on many trees," Drew said. "The bluff behind our orchard may have protected us."

Ten Eyck Orchard closes Nov. 20, but don’t worry, they will be open next fall for apple season just as they have for many years, decades and even centuries.  And as it has been from the beginning, it is still a Ten Eyck family farm, six generations old.