Young, ambitious and milking their own cows

Young, ambitious and milking their own cows 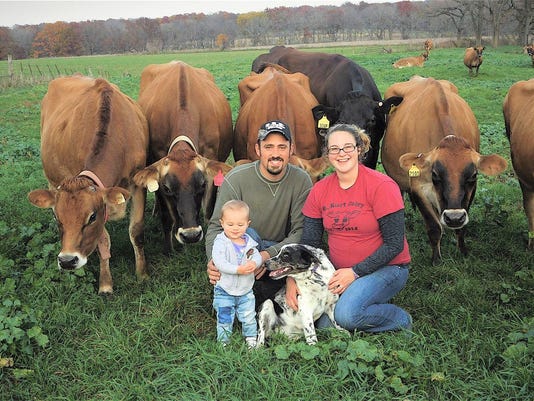 Dylan, Bryanna and Elizabeth Handel and some of their Jerseys.(Photo: Ally Handel)

Since the peak of over 135,000 dairy farms in Wisconsin in the 1930s, the number has shrunk to near 9,400 and is falling by the year. And in spite of considerable publicity (big, high-tech and unimaginable by many are most newsworthy), the majority of our farms are single family and under 100 cows in size.

Despite the oft repeated saying that farmers are getting older (aren’t we all?), there is a long waiting list of young people just aching to get a farm of their own. How to do so is the hold-up. It takes an available farm, money and lots of ambition ... and luck. But it is possible.

The following email encouraged my optimism about the future of farming — small farming indeed — and prompted me to meet and learn about a millennial with youth, ambition and a new dairy farm. 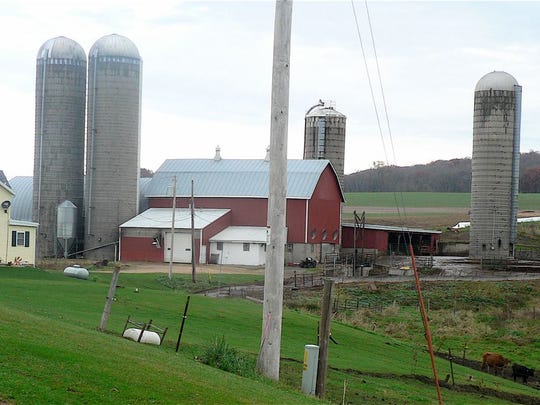 “Enjoy your articles in the Wisconsin State Farmer and have a suggestion you might consider for a future column. With all the press on dairy farmers quitting or having to get bigger, our daughter  is proving them wrong. Bryanna has been buying Jersey heifers since she was 16 to show and breed for her future herd while working 2 or 3 jobs and attending the UW Farm and Industry Short Course.

Two and a half years ago  she married Dylan Handel and they rented a neighbor’s barn near Mt. Horeb to milk her 30 cows. They had a baby in August of 2015 and are expecting again in December of 2016. This summer they sold their farmette and bought 55 acres with a 70 stall barn near Barneveld.”

I’m often asked how I find interesting subjects for this weekly column, and, that’s one way — notes from readers. Of course I contacted Bryanna Handel, made plans to visit and here is her story.

“At about 13 years old, I began feeding calves at my grandparents' (Sylvin and Rosemary Kurt) dairy farm at Deerfield,” Bryanna Handel said. “My dad would drop me off on his way to work at Landmark Cooperative in Cottage Grove, and my mother would pick me up later.”

While in FFA, Bryanna showed pigs and steers at the county fair and in her junior year bought two Jersey show heifers that she raised at her parents' small “hobby” farm in Marshall.  ‘When they calved, they went to the family dairy farm, she said.

While in high school, she  was active in FFA and was awarded the Wisconsin State Farmer and American Farmer degrees and also  began buying cows.  The first two were dry Jerseys that she bought at a Bill Stade auction in Jefferson, and in the next few years she built her herd to 16 cows.

“I always wanted to milk cows, “ Bryanna said. “So I attended the 2010-2011 UW Farm and Industry Short Course to learn more about dairy management."

After the Farm Short Course, she worked as a herd manager at a 90-cow dairy near Columbus. “The dairy had a milking parlor, and the cows were up high, and I am short and had to reach up and I hurt my shoulders. They still bother me today."

In 2012, Bryanna, still much inspired to become a dairy farmer, began work at Verona-based AgSource as a DHI tester in the official milk testing program.

Along the way (at the Jefferson County Fair), she met Dylan Handel, a farm boy from Mt. Horeb whose parents, Steve and Donna, still cash crop the home farm.

In June 2014, Bryanna Kurt and Dylan Handel got married in a barn on  the 15-acre farm they had bought near Mt. Horeb.  “Bryanna really wanted to get married in the barn,” Dylan said. “It worked out well.”

The young couple raised heifers on the small farmette, while Bryanna continued working at AgSource and Dylan was building fences for DRH Fencing at Verona.

It was in September 2014 when Bryanna and Dylan began milking 16 cows in a rented barn near their home.  “You’ll probably remember that two months later the milk price crashed,” Bryanna said. “We only got two good milk checks, but we kept milking, and we had a really good landlord. “ 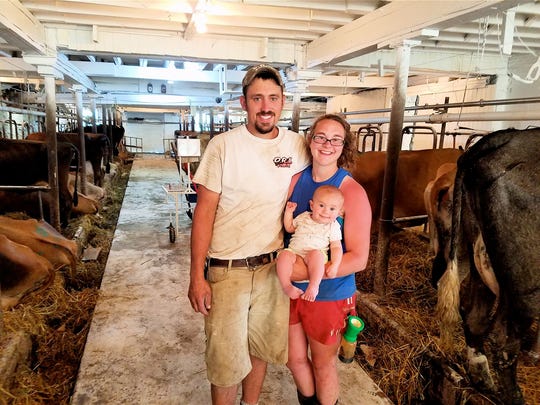 After a year and a half,  the dairy herd was up to 30 cows, and the Handels left the rented barn, sold the 15-acre farm and moved to a 55-acre dairy  farm near Barneveld that they purchased from Doug and Marlene Reeson, who had built a house and still live on a portion of the farm.

“It has a 68 cow tie-stall barn with a pipeline milking system and automatic takeoffs, which I like,” Bryanna said.  “Right now we are averaging 50 pounds of milk with 5.2 percent butterfat and 3.9 percent protein.”

"We had a much higher milk production until a new dairy nutritionist changed our ration, and our cows severely dropped in milk. I don’t think he understood Jerseys and with such a small herd didn’t see us as high priority.  We went back to our former nutritionist, and our milk production is moving back up.

Bryanna does most of the milking using four units. “I was running five, but I’m going to have baby next month, so four is enough,” she said. 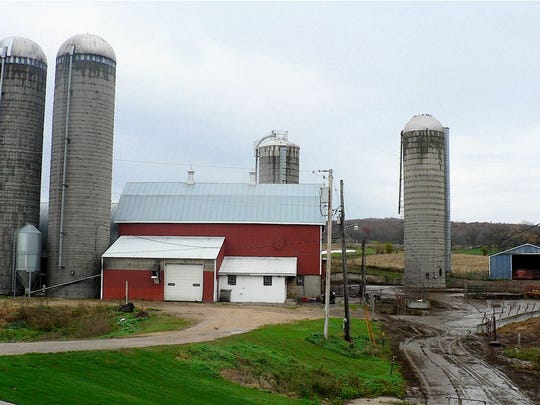 The Handel’s daughter, Elizabeth, is 15 months old but acts much older: She woke up while I was talking with her mother in the kitchen, happily played with toys on the floor, went with us to the barn and walked behind her mother as we toured the barn and feed room with supreme confidence and a showing of ownership.

How did this young couple buy cattle, machinery and a farm at age 25 (Bryanna) and 26 (Dylan)?

Our only loan is for the farm,” Bryanna said. “I worked at several jobs while in Short Course and afterwards milked cows and worked at AgSource. Dylan worked for Premier Co-op in Mt. Horeb and for the fencing company. And, maybe not like a lot of other young people, we saved our money.

The Handels live on a dead end road in a remodeled house. “We’ve heard that house was a disaster,” Bryanna said. “A Hispanic couple who milked for the Reesons offered to remodel the house, the Reesons agreed and the large, modern, well-designed kitchen (the only room I saw) shows their skill." 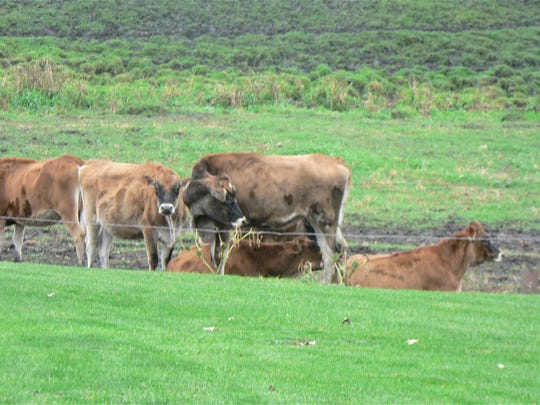 The Jerseys are still on pasture...in November. (Photo: John Oncken)

“We plan to fill the barn with cows — it holds 68 head — which will allow Dylan to be full time on the farm," Bryanna said. “He likes the field work and is good with farm and equipment repairs. There is another 150 acres of land on the farm that we’ll perhaps rent in the future. And we plan to have the farm paid for in 15 years. It’s possible, and we’re good at managing money.”

While Wisconsin lost about 400 dairy farms last year, there is at least one new family dairy recorded in 2016 — that of Bryanna and Dylan Handel at Barneveld who have combined ambition, hard work, astute money management and Bryanna’s vision to have a dairy farm, a dream that happened and is still happening. 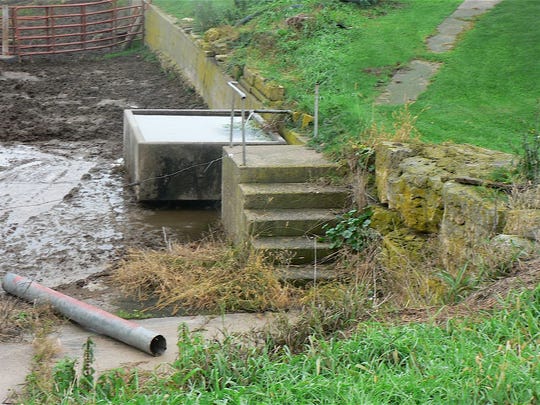 The farm has a spring that provides water for the cattle. (Photo: John Oncken)