UW-Madison ag research all across the state

UW-Madison ag research all across the state

"This is a UAV, not a drone ... and you need a license to operate it,” said Brian Luck, UW biological systems engineer.(Photo: John Oncken)

“These are 'unmanned aerial vehicles,' not drones,” said Brian Luck of  the UW-Madison Biological Systems Engineering Department to the visitors seated on the three tractor-drawn people movers.

“And,” he continued,  “you will need to take an exam and pay $150 in order to use one for commercial purposes, such as inspecting a soybean field for insects or diseases. The Federal Aviation Administration has just released a set of regulations outlining who and how UAVs can be used in your business.”

Although Luck was holding a drone, rather a UAV, in his hand while talking to the crowd, he explained that although he is an expert, he couldn’t demonstrate it over the many research plots behind him because he “didn’t yet have a license.”

Luck was talking to about 75 visitors — mostly crop consultants and farm supply company representatives attending the recent Agronomy/Soils Field Day at the Arlington Ag Research Day north of DeForest.  They were attending the afternoon tour centering on remote sensing in the field (broadly defined as “measuring an object or phenomenon by a device that is not in contact with the object under study”).

Two research studies at Arlington involving a tractor-mounted spectrometer aimed at obtaining information on soybeans to potentially get information on the chemistry and physiology of soybean plants were discussed, as was the use of UAVs.

If this sounds complicated, it’s because it is, and it’s very new.  That’s why UW researchers are studying it, learning how to use the new technology and passing  the information on to crop farmers and their suppliers for their use.  It’s called research, something the UW-Madison College of Agriculture and Life Sciences has been doing for well over 100 years, with the results very evident in the 180 bushels of corn, the 50 bushels of soybeans, the near 23,000-pounds-per-cow milk production, new crop varieties and technology used on Wisconsin farms.

In early August, I wrote about the 100-year anniversary celebration of the Hancock Ag Research Station and how its specialty work centers on vegetable and soybean research on 400 acres of Plainfield sand soil with 120 to 140 ongoing field projects.

And how Paul Sytsma, Hancock ARS ag project supervisor, oversees the 12 full-time and several part-time workers at the station who work with the ongoing field projects that are under the direction of university faculty;

During the course of the day, I met Dwight Mueller, director of the UW Agricultural Research Stations, and learned a bit  about the on-campus research and the 11 outlying research stations facilities scattered across the state.  We vowed to get together at a later date and discuss the ag research program at length. The Arlington Field Day presented that opportunity. 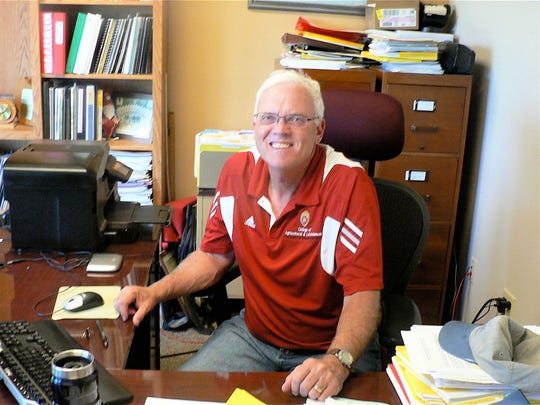 Arlington ARS, at just over 2,000 acres, is the largest in size and is located on some of the state’s richest cropland about 20 miles north of the UW-Madison campus.  It supports a wide ranging array of research projects conducted by members of the CALS faculty. It is also home to the 500-cow dairy facility operated by the Dairy Science Department.

The first UW off-campus research station was established in 1909 on 80 acres in Spooner, thus providing university scientists a place to work out their ideas under the unique conditions of northern Wisconsin. Spooner also became a center for sheep research and for many years has been the only dairy sheep research facility in North America — a distinction that will end Oct. 13 when the entire dairy sheep research flock  will be sold through an online computer auction.

The Marshfield ARS operates 1,250 acres on two farm sites in Wood County and Marathon County.  Over 50 percent of Wisconsin’s dairy farms are located in the north-central and northern Wisconsin area. Thus, dairy-related research with emphasis on heifer rearing and management is the major focus at Marshfield, but extensive work done on field crops, waste management, farm economics and crop storage is also emphasized.

The Kemp Natural Resources Station in Oneida County is dedicated to research, instruction and outreach concerning the management, conservation and preservation of northern Wisconsin’s natural resources. Situated on the shores of Lake Tomahawk, the station supports a diverse wildlife population and some of the last remnants of old-growth forests in the Lake States

The Peninsular Agricultural Research Station near Sturgeon Bay in the Door County Peninsula between Green Bay and Lake Michigan has, because of its unique climate, a major focus on producing, managing and processing fruit crops.

Funds to do research

In 1887, Congress funded agricultural experiment stations “to do research in areas of soil science and plant growth and to disseminate that information.”

The University of Wisconsin established its first agricultural experimental stations at Spooner and Madison (Hill Farm) in 1909, followed by the Marshfield station in 1912 and the Hancock station in 1916.

There were a number of UW-ARS facilities that have come and gone. The Hill Farms ARS that, along with Spooner, dated to 1909, was sold as a Madison subdivision in the mid 1950s and since has been the site of a shopping mall and residential area. The funds were used to purchase land for the proposed Arlington ARS.

Others that have gone were the Ashland Agricultural Research Station, which provided agricultural education to northern Wisconsin from its inception in 1911 until it was closed by the UW in 2006, and the Emmons Blaine Farm in Lake Mills, where Professor Wilbur J. “Tip” Tyler conducted a pioneering series of studies on dairy cattle growth, milk production, reproductive function and producing high-quality beef with Holstein steers. In 1977, CALS closed the Lake Mills facility and relocated the Blaine herd to the new facility at Arlington.

The College of Agricultural and Life Sciences also operates a number of research and instructional greenhouses under a centralized management system that is administered by the Agricultural Research Stations.

ARS director Mueller said there are about 120 full-time employees in the off-campus research facilities, lots of part-time workers, especially during the planting and harvest seasons, and the hundreds of faculty conducting the research.

It’s a long way from the thought to the project to the research to the completed new seed, fertilizer, service or technology to the farmer, the farm and finally the consumer.  The UW-CALS extensive ag research station system provides the research space and facilities to get to the future, whether it be new cover crops or UAVs.

For more info, got to ars.wisc.edu.