Members of Congress were urged to sign onto HR 832. 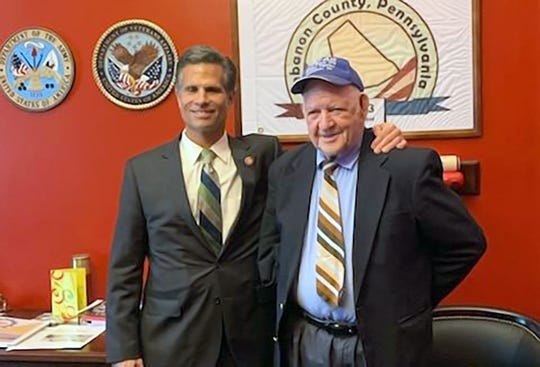 Congressman Dan Meuser and Pro-Ag Manager Arden Tewksbury discuss the financial crisis facing dairy farmers on March 10, 2020 in Washington, and the Congressman said he would like to try something different for dairy farmers.  (Photo: Progressive Agriculture Organization)

March 9 and 10, some members of Pro-Ag called upon all members of the Pennsylvania delegation. Their main purpose was again to thank the members from PA who have endorsed Congressman GT Thompson’s bill HR 832 which is geared to allow all schools to serve whole milk to their students.

There are 10 Pennsylvania Congressmen who are cosponsors to Thompson’s bill; the most of any state. However, there are eight in Pennsylvania who have not signed onto this bill.

We strongly urge the aides to recommend each of these eight members of Congress to sign onto HR 832.

Even more importantly, we discussed with the aides and some members of Congress, the continued crisis facing dairy farmers across the United States.

We urge all the members of Congress from Pennsylvania to take immediate action to help save many dairy farmers. All the Congressmen received a copy of our petition to Secretary of Agriculture Sonny Perdue.

We also made sure they all understand that Pro-Ag has updated the Federal Milk Marketing Improvement Act, and the new version is being reviewed by some members of Congress, and other organizations.

However, time is of the essence. As Congressman Dan Meuser stated, it appears that past efforts to solve the dairy farmers’ financial dilemma have failed, and that is why he said I want to try something different (will this be the Federal Milk Marketing Improvement Act?)

One of our best meetings was held with the aide to Congressman Delgado (NY).  He has signed onto HR 832.

Since we have returned from Washington, the episode of the virus has increased.  The President and several Congressmen are urging things to be done to help people be solvent.  We must urge the President and members of Congress to look at the impact this is doing to our dairy farmers across the United States.

We’re not asking for direct hand-outs, but some changing in pricing to dairy farmers must be done immediately.

This terrible virus will be a wake-up call to everyone in the United States, and how important our food supply, or lack thereof, truly is.

Here are the losses or underpaid figures experienced by New York and Pennsylvania dairy farmers:

To determine the loss value to the rural economy in Pennsylvania and New York, multiply the losses by 5.