An incomplete measure could be costly: Test your soil for both forms of nitrogen

Test for both ammonium and nitrate or you may get an incomplete measurement – potentially causing an expensive mistake.

An incomplete measure could be costly: Test your soil for both forms of nitrogen 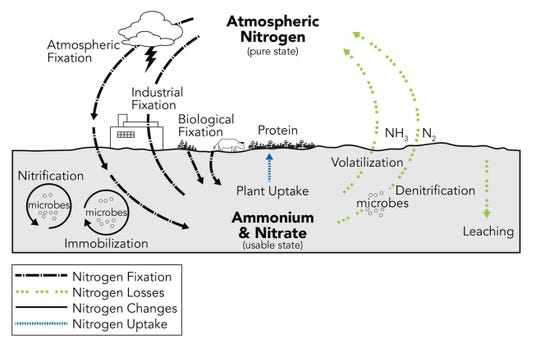 If you apply anhyddrous ammonia to soil test for both ammonium and nitrate.  (Photo: AgSource Laboratories)

If we apply anhydrous ammonia to the soil why don’t we test the soil for ammonium?

Are you confident that all the nitrogen from the anhydrous ammonia you applied last fall is available this spring? Did you apply manure on a field as a source of nitrogen? The only way to know if that nitrogen is available for your crop is to test the soil for both nitrate and ammonium.

“When nitrogen is added to the soil as fertilizer or manure it is not stable. The longer the nutrient is in the soil before crop uptake the greater the risk of losing some of the nitrogen.  Hopefully most of the N will be captured by the crop roots but some will be lost by natural processes. Rather than guessing what is going on it is better to test the soil so you can manage it,” notes Dr. Jim Friedericks, AgSource Laboratories’ Director of Outreach and Education.

Plants absorb nitrogen from the soil as either nitrate or ammonium. Nitrogen can be added as fertilizer, including forms such as ammonium, nitrate, or urea, or it can be added as more complex organic forms like manure or in crop residues. The nitrogen in crop residues and in the organic portion of manure is bound up with cells and fiber so it must go through a biological decomposition before it is released as ammonium in the soil. Then, just as depicted in the Nitrogen cycle (Figure 1), ammonium and nitrate can be used by plants or other soil organisms, or it is lost through leaching and volatilization.

“The processes that impact nitrogen in the soil are a challenge to work with, especially in the spring when soil temperature and moisture levels change so quickly”, says Friedericks. As the soil warms up nitrates are formed from the ammonium in the soil. This conversion is faster when the soil is above 50oF. But wet areas in a field will warm up more slowly, and excess moisture in the soil can either leach the nitrate, or the nitrate might be converted to gaseous nitrogen and be lost to the air if the soil remains waterlogged.

Just analyzing the soil for nitrate reflects the fact that ammonium typically converts to nitrate rapidly in warm soil. But if fertilizer was recently applied, or if a nitrification inhibitor was applied with the fertilizer, then considerable amounts of ammonium can be present even after planting.  In that situation a low nitrate test value indicates the incomplete conversion to the nitrate form, not a deficiency of nitrogen. Additionally, a soil with a pH of less than 5.5 can restrict the rate of this biological conversion.

Because soil organic matter is a source of nitrogen and these conversions occur naturally in soil there is typically a ‘background’ concentration of both ammonium and nitrate even in an unfertilized soil.  Those values are typically between 4 and 8 ppm for both nitrate and ammonium.

Dr. Friedericks recalled a recent example of the usefulness of testing ammonium in the soil.  “A grower applied manure last fall and sent soil samples to the laboratory in April. He called with questions because the soil test nitrate result showed only 7 pounds of nitrogen available in the field and he was worried that he had lost all the nitrogen he had applied. When the ammonium was also tested by the lab, the soil had 150 pounds of N as ammonium, showing that the conversion process had not started in his field and he could account for all the nitrogen he thought he had.”

The moral of this short story is that if you don’t test for both ammonium and nitrate you may be getting an incomplete measurement – potentially causing an expensive mistake.

Here are a few ways to use laboratory analyses to measure nitrogen availability:

• Add a nitrate and ammonium evaluation to a standard soil test.

Note the result of these add-on tests are limited because it only evaluates the top 6-8 inches of soil - not accounting for the downward movement of nitrates.

This has the advantage of accounting for the mobile nitrate down to two feet.

Adding an ammonium test to the top 12-inch sample can indicate nitrogen that is available but not yet in the nitrate form.

• The pre-sidedress soil nitrate test (PSNT) is collected when corn is 6 inches tall. It is used to adjust the N application for the intense growth of the following weeks.

The PSNT measures only the nitrate in the upper 12 inches of soil.

The recommendations from this test are most accurate when the field has a history of manure application. If only commercial fertilizer has been applied, the test can underestimate the amount of sidedress N required to sustain the crop.

Consider adding an ammonium test that better measures the amount of N available to the crop. The ammonium found can be reduced from the recommendation, keeping in mind that there is always some background ammonium in the soil.