The sale dates to 1983 when it began as a means to apply in actual practice what was being taught at the UW-Madison Dairy Science Department. 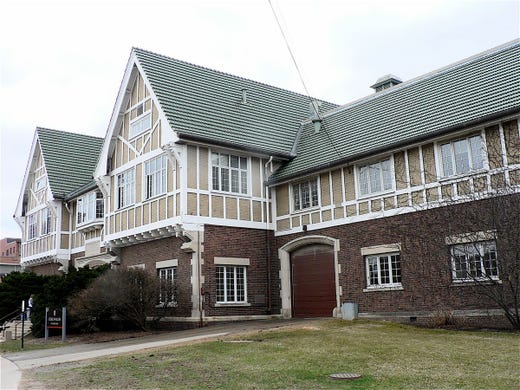 The Stock Pavilion was Madison’s biggest gathering Hall from 1909 to 1930. John Oncken
Fullscreen 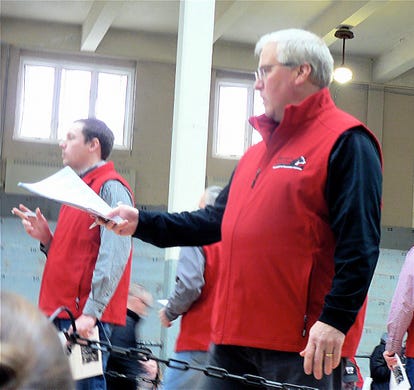 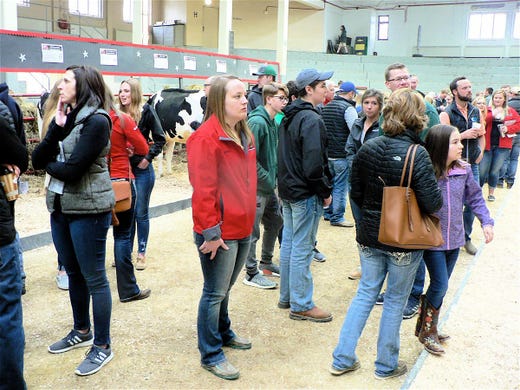 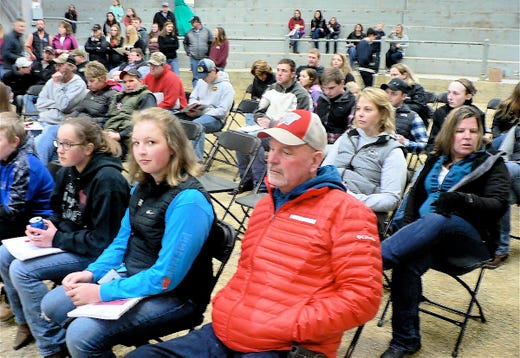 The chairs were full and the audience was waiting for the first animal in the sale ring. John Oncken
Fullscreen 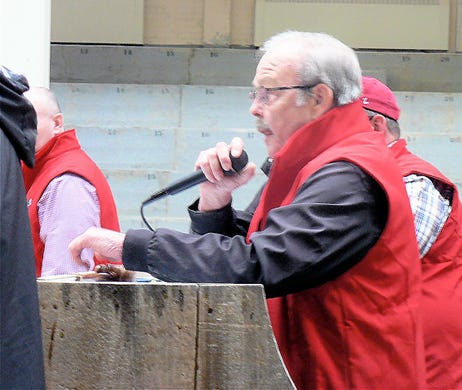 Tom Morris has called each of the 19 Badger Invitationals beginning in 1983. John Oncken
Fullscreen 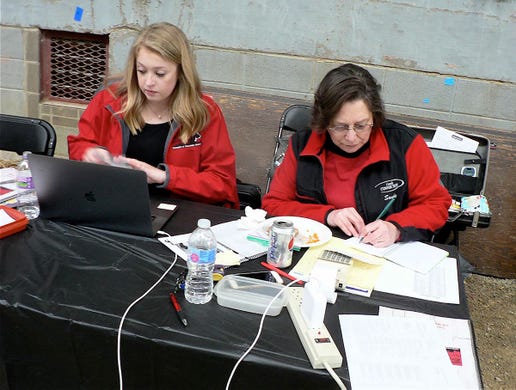 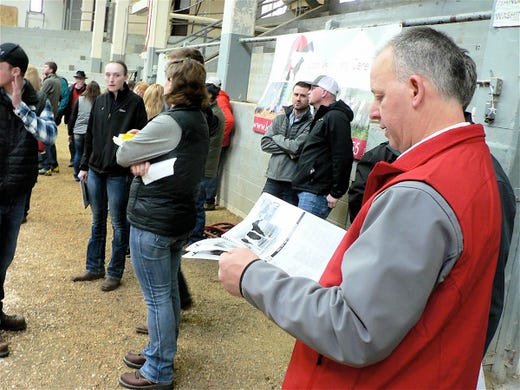 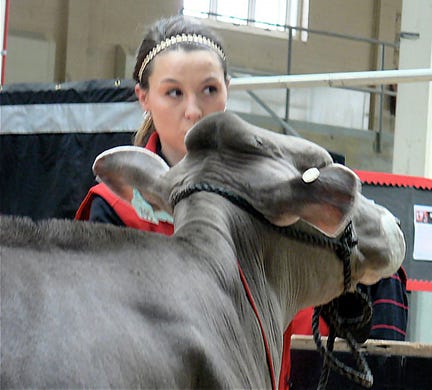 It was a typical spring day — cloudy skies, temperatures in the low 50s and no rain in sight as the 19th Badger Invitational Dairy Sale kicked off at 11 a.m. on Saturday, April 6 at the historic Stock Pavilion on the UW-Madison Ag campus.

The 39 Holstein heifers that passed through the sale ring were sold by auctioneer Tom Morris for an average price of $2467 with Lot number 1, MS Raptors Brutality - ET consigned by  Majestic View Genetics, Shore and Connery of Sun Prairie, topping the sale at $10,250. The buyer is listed as Maple Leigh Futures, Delevan, Eva Doornink and Majestic View Genetics. 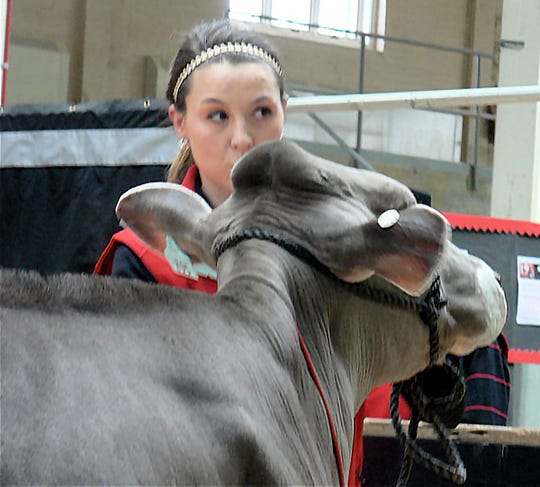 Second high selling heifer, Our-Favorite She Vintage ET, at $7,500, also a September 2018 heifer was consigned by Stanek Holsteins, Fall River with the buyer listed as “The Gilbertson Girls” at Hollandale. (Reportedly, Mark Gilbertson was the bidder and bought the heifer for his four granddaughters).

Note — as is common in many registered dairy auctions cattle often have multiple owners and buyers. This, for many reasons including the high prices,is often needed to buy top pedigree and genetic merit animals that may be shown at top shows and produce potentially valuable offspring.

For the first time, a half dozen Brown Swiss heifers were included in the auction bringing an average of $1,987 each.

The Badger Invitational Sale dates to 1983 when it began as “a means to apply in actual practice what was being taught in the UW-Madison Dairy Science Department classroom, such as dairy pedigrees, sire evaluation, performance indexes and business principles." 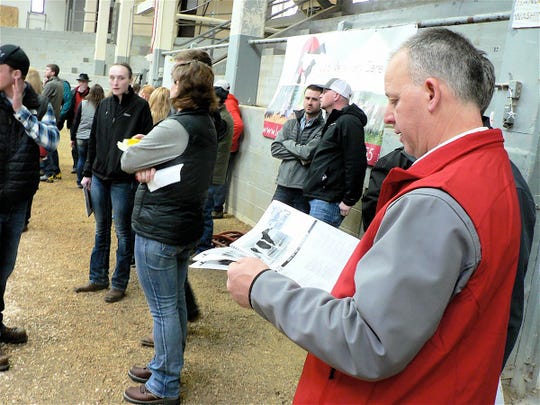 Auctioneer Tom Morris, of Amery, then a student, who has called each of the 19 Badger Invitationals, remembers the beginning well, when Dr. Dave Dickson, beloved dairy science professor and member of the Badger Dairy Club embarked on creating the event.

“There had been several other money raising events conducted with the Farm Short Course program prior to the first sale,” Morris says. "The sale was held at the Arlington Research Farm for eight years before moving to the Livestock Pavilion where it has remained and prospered for all these years," he said with pride.

The Badger Invitational is unique in that it is planned, organized, conducted and hosted, from beginning to end, by student members of the Badger Dairy Club. This year’s general Chair, Danielle Warmka, who was raised on the 500 registered Holstein Warmka Dairy at Fox Lake, and a senior in Dairy Science was the overseer of the six show committees: general, advertising, catalog, selections, decorations, grounds and cattle care involving some 60 members of the Badger Dairy Club. 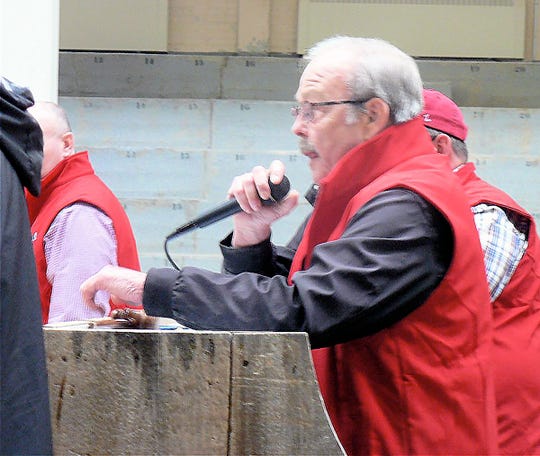 Tom Morris has called each of the 19 Badger Invitationals beginning in 1983. (Photo: John Oncken)

"Our members began work last fall and did everything from visiting farms, and selecting cattle to preparing the advertising and making the catalogs and today you see them clipping and readying the heifers for the sale ring and forking manure," Warmka summarized.

She also thanked the many Dairy Science alumni that gave assistance, much in the form of advice and guidance, especially Tom and Sandy Morris (auctioneer and sale clerk), the 10 UW alumni who acted as ring men, taking bids and moving the animals in and out,and the four young women serving as leadsmen.

It’s no secret that the dairy economy has been suffering from low milk prices for several years and that good milk cows can be purchased for $1200 (or maybe less), why would buyers pay several thousand dollars for a young heifer calf at this sale? For the same reasons that buyers often (most always) pay more for heifers than mature cows at some dairy dispersals and consignment sales even during times of good milk prices.  I asked that question at a national cattle sale many years ago where a young calf  brought a bigger price than her very high production dam. I never got a good answer other than; hope springs eternal — maybe the calf will ultimately be better than her mother, maybe.

The buyers include most anyone with an interest in registered Holsteins and access to a dairy farm; well known breeders seeking special genetics; grade herds wanting to go the registered route; parents buying calves for their young children who want to get involved; and breeders liking the looks of an animal as a potential winner at big dairy shows such as state fairs and World Dairy Expo. 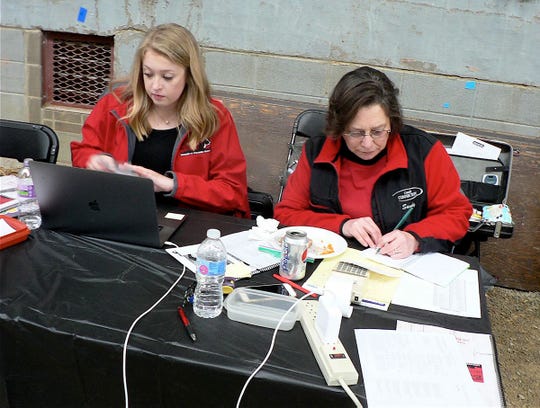 A hobby and experience

Several sales ago, a dairyman explained why he purchased a heifer at the sale: “My children do quite a bit of showing at district shows, state fair and World Dairy Expo, he said. “Showing cattle is my hobby and the kids' experience."  Tom Morris calls it “blue ribbon fever.”

The Badger Invitational also includes the UW-Madison Dairy Science “loyalty factor." Graduates of the program, some of many years ago, remember their days as members of the Badger Dairy Club and working at this same sale as a student. Now, years later, they give back by consigning animals, and perhaps buying at the sale. It is often suggested by sale attendees that the large audience is made up of many UW Madison dairy science or ag graduates. And, why not?

The Badger Dairy Club receives a percentage of the sale price of each animal which along with money gained from the popular dairy lunch stand at World Dairy Expo (grilled cheese sandwiches etc.) and working at other Expo projects, provide funds to carry on the club activities.

Some years ago I got curious about that first Badger Invitational in 1983 where 51 lots averaged $2,741 with the high animal bringing $10,500 and what happened to the top heifer that sold for $10,500 to Ray McEnroe of Millerton, NY, so I called him.

"I don't remember," McEnroe said. "At the time, I was buying hundreds of cattle each year on consignment while running Ray-Barb Dairy and have no idea." 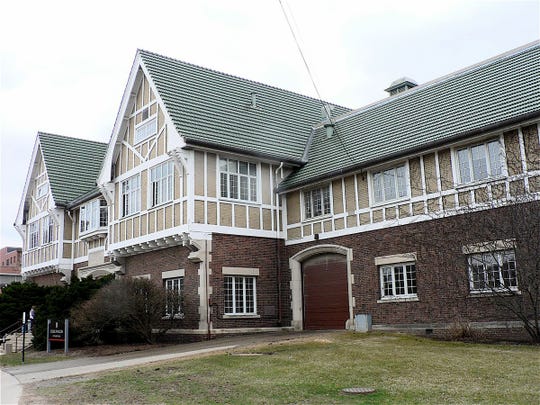 The Stock Pavilion was Madison’s biggest gathering Hall from 1909 to 1930. (Photo: John Oncken)

McEnroe left the dairy business in 1994 and now, with a partner, runs a 1,500-acre McEnroe Organic Farm, one of the state's first and biggest organic farms.

Interestingly, Ray told me his farm is next door to the once-famed Hanover Hill dairy in Amenia, the birthplace of the famed Hanover Hill Triple Threat, often called the "father of the Red and White dairy breed."

After the Hanover Hill herd dispersed in 1972 (ABS bought Triple Threat at the sale), the well-known farm was sold, fell into disrepair and almost abandoned. The barn has since burned to the ground, McEnroe said.

The sale site — the UW Stock Pavilion is an interesting and historic site: built in 1909 it was the largest auditorium (seating for 3,500) in Madison until the advent of the UW Field house in 1930. Many concerts and civic events were held there including speeches by presidents William Howard Taft, Teddy Roosevelt and Harry Truman.

The 19th Badger Invitational was a good experience for all. Hopefully there will be a 20th two years from now.

John Oncken is owner of Oncken Communications. He can be reached at 608-572-0747 or email him at jfodairy2@gmail.com.