Wisconsin Public Service Show: It's about farming and the future

The WPS show is a ritual for some, a sign of the end of winter for others, but still a beacon for the future of farming.

Wisconsin Public Service Show: It's about farming and the future

Farmers like to see what is under the hood.  (Photo: John Oncken)

The outdoor bleachers were crowded and a ring of spectators surrounded the kids tractor pulling competition on the runway between the exhibit buildings: The dining tent was jammed with  the picnic tables all filled and a line about 10 feet wide slowly making its way to the food stands and the crowd was shoulder to shoulder in Exhibit Hall B.

Yes, it was the second day of the Wisconsin Public Service (WPS) Farm Show being held at the EAA grounds in Oshkosh this last week of March and I was  pleased to be there. What could be better than to see the people (many old friends) from all forms of agriculture, learn about new things now available in farming and just be close to the agriculture scene.

For many, the annual Wisconsin Public Service farm show has become a rite of spring.

"It's either the end of winter or the beginning of summer," said one visitor with a laugh. “It means winter is most likely done and we can get ready to do some real farming in our fields.”

"It's also a tradition with me," I responded, “it seems like I’ve been attending this show all my life.” 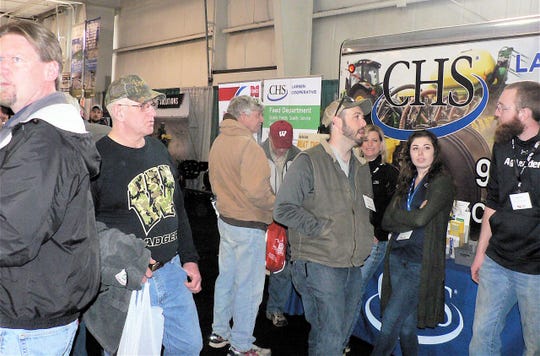 It was shoulder to shoulder people on Wednesday at the WPS Farm Show. (Photo: John Oncken)

Wisconsin Public Service (WPS), the utility (now joined with WE Energy) providing power to customers in eastern Wisconsin, sees the farm show as a way to serve the agricultural community.

It was the second of three Farm Electric Power Shows to come into being, but the only one still still being held. In 1959, Wisconsin Power & Light initiated a farm show in Madison: The idea being that there were many Wisconsin farmers who were not using electricity to its fullest extent and the electric companies were selling electricity.

Wayne Russell, one of the WP&L agricultural representatives, initiated the show then called the Farm Electrification and Materials Handling show. WPS liked the idea and followed with their first show a year later in the parking lot at Lambeau Field and the Brown County Arena in Green Bay. In 2003, the WPS Farm Show made the move from Green Bay to the Experimental Aircraft Association (EAA) hangers and taxiways at Oshkosh.

It’s now 2019: The original Chippewa show has long since left the scene and the Madison Show died soon after the sponsoring utility quit its sponsorship  but thankfully, the WPS Farm Show is still drawing crowds and acclaim from the farming community 59 years later. 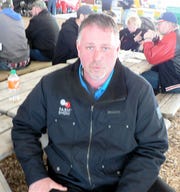 Rob Juneau is the long time manager of the WPS Farm Show, this is in addition to his job as an agricultural consultant WPS.  (Photo: John Oncken)

It appears that the attendance this year will again exceed 20.000: On Tuesday some 6600 people entered the gates with 9600 on Wednesday according to show manager Rob Juneau. with final day  attendance easily bringing the total well over the estimate.

Farmers have ample opportunity to see new equipment and talk with company and organization representatives at a host of conferences and shows held across the state. Among them: the Dairy Business Association’s Dairy Strong; the Professional Dairy Producers annual business conference both held in Madison; a number of local one day shows in malls across the state and Farm Technology Days later in July. 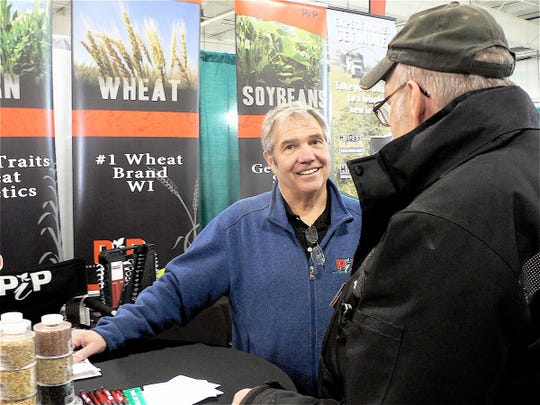 Commercial exhibitors have told me time and again that the WPS Farm Show is their real “selling show” where farmers are seriously taking notes and asking questions for decision making. Most farmers I talked with this year admitted they were “just looking” at things they will soon need or seriously want in the near future.

A couple of friends said, “Things break or wear out so we do need to buy some replacements. This is the show to get information.”

Easier to back up?

What’s new this year? I’m sure there were many new or improved products or services offered but as always, I did not get around to all the four exhibit buildings to view everything. I did see the BakKab display in building B and was mystified as to what the product was.

“Just a minute and I’ll tell you all about it,” Luke Haen, the man behind the desk said. With that he grabbed a box-like product about a foot long and mounted it on the back of the TMR Mixer parked in the booth across the aisle, came back flicked a switch to turn on a strong light on the unit and instructed me to look at a tablet computer he had handy.

The picture on the screen was of the exhibit area behind the mixer. He adjusted the light to varying stages of brightness, turned it off and returned with the unit that is about 11 inches long. 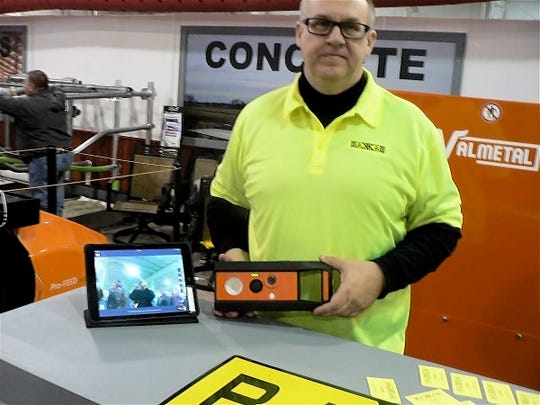 Luke Haen, Kaukauna and his KarKab unit that he invented (Photo: John Oncken)

"I’m a truck driver and one of my real challenges is to back a semi up to an unloading dock, especially in the dark. I always thought there should be a way to invent a system to solve this challenge and after five years of work this is the result. I began selling them last week and this show is the first public display. I think farmers moving big wagons or equipment in the dark would find it useful,” he summarized.

The BakKab has a magnet (or strap) to attach it on a truck or wagon. After getting back into the cab or tractor you can see what’s in back on a tablet or mobile phone. In simple terms the website says: “an innovative new product made to aid in the process of backing up large trucks, motor coaches, buses (and wagons).

Interestingly, at least to me, the BakKab is produced by a company located in the Sun Prairie area about a mile from where I live.

Haen says he developed the BakKab for the truck industry but thinks there is a place for it in agriculture. “We had a good amount of interest at the Farm Show.” Haen says. “But the ag economics are not good for farmers to buy new things that cost $999 right now.

“We’re really tired of hearing about the doom and gloom in dairying” one of a group of four farmers said during a conversation I was involved in. “Yes the economics are bad but we’ve seen it all before, but we’ll survive and things will eventually turn around.”

It turned out the foursome were all from the Chilton area: Bob Van Daalwyk and his employee James Mader who milk 200 cows and Jerry Lintner and his daughter Jamie Beyer with 150 cows at GerAnn Lintner Family Farm. 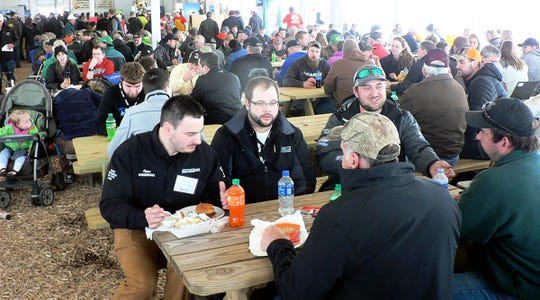 The food is always great and the dining tent is always full. (Photo: John Oncken)

Jamie is a UW-River Falls graduate and was an agricultural instructor for nine years at Elkhart Lake and Random Lake before returning to the farm full time. She is now part owner and herd manager of the dairy herd that carries a Rolling Herd Average of 32,000 milk. “Yes, I did buy a cattle chute for hoof trimming here at the show today,” Jamie says.

“I guess we’re just tired of reading so much about farmers going out of business and leaving the longtime family farm,"  one farmer further explained.  "We are all surviving and getting along."

In spite of the dairy economics there is optimism in the dairy world, that’s why farmers milk cows, raise crops and attend farm shows. It’s about the future!

John Oncken is owner of Oncken Communications. He can be reached at 608-572-0747 or email him at jfodairy2@gmail.com.