No cows: many memories 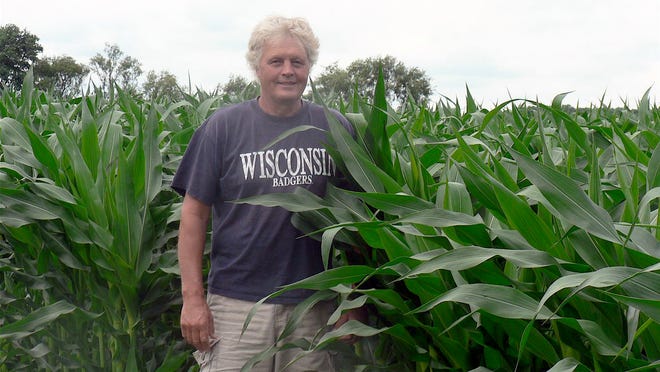 Jeff and Sandy Notstad never milked a lot of cows on their family dairy in southern Dane County between Utica and Cambridge. But, their 40 cow herd was always among the state’s best as a rolling herd average of about 30,000 pounds of milk showed.

Jeff, did not plan to be a farmer, he was going to be a pilot. Thus in that effort, he attended the Air Force Academy for two years. Then, he was told that at six foot four inches in height, he was too tall to be a pilot.

This meant a change of plans and he transferred to the UW-Madison where he graduated in 1977 with an Ag Economics degree. He continued farming on the home farm, something he had done while attending the UW.

In 1979, Jeff and Sandy were married and in 1980 Jeff’s dad, Orlow, died of a heart attack and the young couple took over the farm. There they built the dairy herd, raised corn, soybeans, hay and tobacco and four children, Erin, Mallory, Jens and Garrett.

At one time they also raised tobacco, 20 acres early on which gradually decreased to four acres as the labor situation changed over the years. Twelve years ago, the Notstads quit raising tobacco entirely.

In October 2016, Jeff’s and Sandy’s life on the farm changed when they sold their cows. After 36 years of milking morning and evening — about 26,280 milkings — of preparing the cows and watching the milk flow, the barn was now empty and both Jeff and Sandy admit it has been an emotional change and shock.

“We had talked about it for a couple of years,” Sandy says. “It was not just one thing.”

“I had some back problems and a bout of kidney cancer.” Jeff says. “Thanks to Sandy, she kept everything going.”

“And we didn’t feel we were able to maintain our dairying standards we were used to,” Sandy adds.

"Our four children each had their own careers and while over the years we had hired neighbor kids to milk and it had worked well, now finding capable, part time help to meet out cow management standards is difficult to find," they said.

But, farming life continues with 600 acres of land growing corn, soybeans and hay. About 150 acres (the next farm west) of the total is owned by Jeff’s brother Jim, a long-time airline pilot who lives in the Minneapolis area but plans to retire to the farm.

Note — Perhaps you remember my columns about Jim's remodeling of the historic three-story Norwegian barn some years ago.

Jeff and Sandy laughed about the many hours they spent cleaning the years of accumulation in the old barn for two of their children's weddings and a couple other family events.

Jeff said his farm had been in the family since 1947 when his grandfather purchased it.

“He was a renter on nine different farms before buying,“Jeff says. “But his wife (my grandmother) had worked on the farm in 1912 as a 16-year-old girl. She and other young girls lived in a small building we call “the hotel” that was used for different things over the years including as a granary. The building is still standing."

Jeff asked if I’d like to see a stone fence on the farm that has been there since about 1850. I envisioned a fence made of a pile of rocks taken from farm fields, as we sped off through several cornfields on Jeff’’s Gator. How wrong I was!

“There it is,” Jeff said as he stopped in front of a section of neatly laid slabs of limestone rock about four feet high. “This extends for well over half a mile and we’re not sure who built it or why or where the rock came from,” he explains.

My reaction was “amazing” just think of the work involved in quarrying the rock, hauling it and stacking it and it’s still there!

“I guess only a Norwegian would do such a thing,” Jeff said with a laugh.

We continued on the Gator through the cornfield already six feet tall on on June 25, traveling on a curvy, mowed lane.

“We’re on a water retention terrace that is contoured,” Jeff explained. “This was one of the first farms in eastern Dane county that went into the soil conservation program, my dad saw the value of the program. However, I’d like to make some changes for today's big tillage equipment.”

Both Jeff and Sandy admit to strong emotional ties to their dairy herd that was sold to a Lake Geneva dairyman a year and a half ago.

“That was a really bad day for us," the couple agreed.

“Allen Rademacher, a friend from Sun Prairie brought hot chocolate and cookies, that helped,” Jeff says. “We did keep a dozen bred heifers that were sold over time and the last ones went about two months ago.”

"We are feeding about 40 Holstein steers on pasture that we will have processed and sold by halves or quarters," Jeff says.

Jeff has  been involved in community organizations or many years: town  board, school board and director of AMPI and Foremost Farms cooperatives. They are proud of the dairy herd and farm they built:  “We always hired the smartest consultants we could find."

“The cows are gone, but I’m still a dairyman,” Jeff admits with passion and Sandy most certainly agrees.

What is the sadness and long-lasting memories about quitting dairying all about, city friends sometimes ask?  My answer:

Cows unlike like cats and dogs are not pets and dairy farmers know that. The cows  are often seen as coworkers. The farmers feed and take care of the cows providing the best possible nutrition and comfort. In turn, the cow provides the milk (lots of milk) for the farm family.

Over time the farmers get to know the cows and vice versa in a mutual sort of way. Farmers talk to cows and cows listen and understand. (As a youth a loud cry of “come boss” would bring cows from a quarter mile away.)

As time goes on, the cow and the farmer get acquainted and the herd becomes almost a part of the family in terms of time and working together. The farm family fits their schedule to that of the cows (milking, calving, feeding, health, breeding and more) and the cow responds with milk for family living.

Cows will do their best to be a part of the farming team and do try to tell the farmer when all is not well. (Well known animal behavior expert Temple Grandin of Colorado State University has helped us all understand cows better.)

Yes, the dairy herd commands much of the  time, efforts and thoughts of a dairy farm family over many years. The Notstad cows have found new homes and a new family who is treating them well.

The Notstad dairy barn (as are so many others) is empty and lonely, and only the memory of those days and years of the cows and family working together, while the Notstad family children were born and grew up, remain.

Such memories are indeed to be cherished.