Bill Graham was a successful businessman, inventor and innovator, but a farmer in his heart. 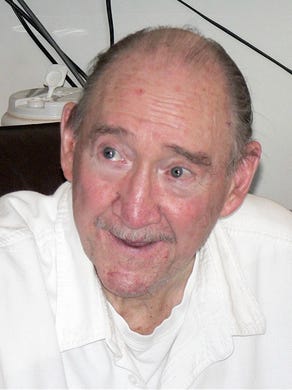 Bill Graham, successful businessman, inventor and innovator, but, a farmer in his heart. John Oncken
Fullscreen

The 800 acres at Agrecol are devoted to research, propagation and marketing of native prairie plants and seeds. John Oncken
Fullscreen 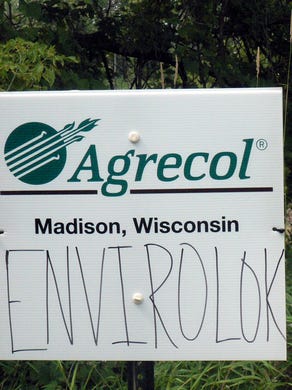 Agrecol and its sister company Envirolok are devoted to restoring the land to its original state. John Oncken
Fullscreen 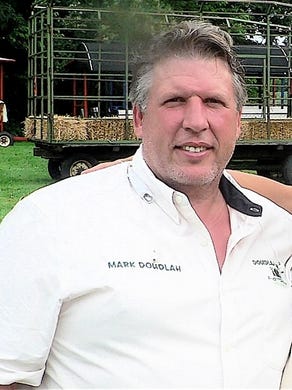 Mark Doudlah worked to grow Agrecol for 18 years. He is now an organic farmer at his home family farm near Evansville. John Oncken
Fullscreen 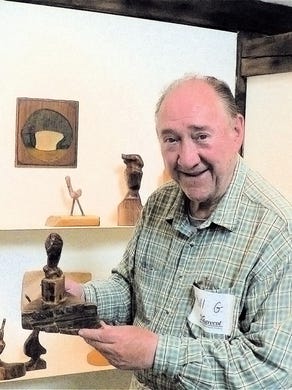 Bill Graham and some of his wood carvings. In recent years he has spent more time on arts and crafts. John Oncken
Fullscreen

Some of Grahams wood carvings. Graham says, it took about 70 years for me to figure out it was OK to make things for yourself." John Oncken
Fullscreen 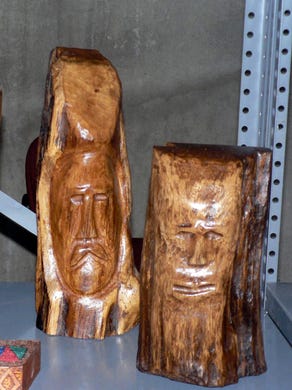 Some years ago Graham built a gallery on his house to display his works. John Oncken
Fullscreen

Bill Graham, successful businessman, inventor and innovator, but, a farmer in his heart.(Photo: John Oncken)

The word "character" has many meanings, but the one I’ve often went with is a set of qualities that makes a person different from other people for which they will long be remembered. Over my many years of meeting (and writing about) people, there are but a few people that I classify as “characters” in themselves.

The most notable and memorable of which is W.T. “Bill” Graham, a Word War II flyer, a Madison businessman (and agriculturist) who recently died at age 93.  He led a life that is difficult to imagine: Born in the red clay farming area in northern Georgia, he was discharged from the Air Force in Madison Wisconsin where he invented a typewriter cleaning brush that was the start of his W.T. Rogers Company , which he sold for $50 million in 1990.

From, 1949 to 1991, he was a super salesman selling office supplies to small stores in the early days and to the likes of Office Depot and Officemax after the office supply industry consolidated.

But, even during those days of building a mega business, the boy from Georgia never forgot his days working on his grandfather’s farm and traveling with his father who was a fertilizer salesman and cotton buyer. He also never forgot the over-farmed, eroded, worn-out red clay soils of the cotton farming community where he was raised.

“I think I’m interested in good agricultural practices today because I remember how bad it could be when you didn’t take care of the land,” Graham once explained.

While traveling the US and selling his office supplies, Graham started a dairy cow leasing business.

“In the late 60s and early 70s there was a demand for milk in Texas and Oklahoma,” Graham says in his never finished book. “So several of us set up a business in which we raised calves on a farm near Madison, grew them out and bred them in Kansas and shipped them to Texas where they were leased to farmers,” he explained. “We also had some cattle fed out by Pampered  Beef in Iowa. Those Holstein steers tasted like prime Angus beef.”

The “Rent a Cow” business ended when the cattle began disappearing and the authorities were not much interested in a few rustled cows and our biggest farmer went broke,” he says. “We about came out even on the whole operation.”

The Wisconsin ag world really got acquainted with Bill Graham after he sold his company in 1991. At the time there was a move to a huge landfill site on land
bordered by the Interstate and beltline in southeast Madison and some land Graham owned. Strong opposition from local Beltline and Bill got involved. He finally solved the controversy by buying the 540 acres of land.

Soon after the State announced it was seeking to build a new building to house the Department of  Agriculture, Trade & Consumer Protection (DATCP).  Another site being considered was the American Family complex on Highway 151 on the way to Sun Prairie. After many discussions with then Governor Tommy Thompson, the decision was made to accept Graham's offer to build the World Dairy Center campus and DATCP building on the hill that would have been leveled if the site had become a landfill. And the beautiful old oak tree fronting the DATCP building is often referred to as “The Bill Graham oak.” 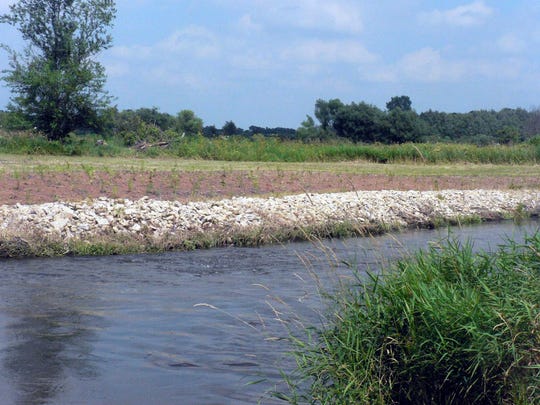 In 1991, Graham bought 100 acres of irrigated land near Sun Prairie with plans to start a nursery and sod farm.

“I wanted to do something that helped return the land to a more healthy condition,” Graham said. “I started Agrecol (AGRculture and ECOlogy) to apply good business practices that would add value to the world’s land.”

“We were involved in so many things,” he says. “We did research on new crops, native plants and trees,  Bill Graham was a visionary so we did a ‘million things.’"

In 1992, LeMahieu hired Mark Doudlah an Evansville farm boy and UW Engineering grad who went on to become company manager and president.

“We collected native prairie seeds — 236 species at one time — that we grew into more seeds and more seeds. We needed more land so Graham bought 800 acres near Evansville where the company remains. 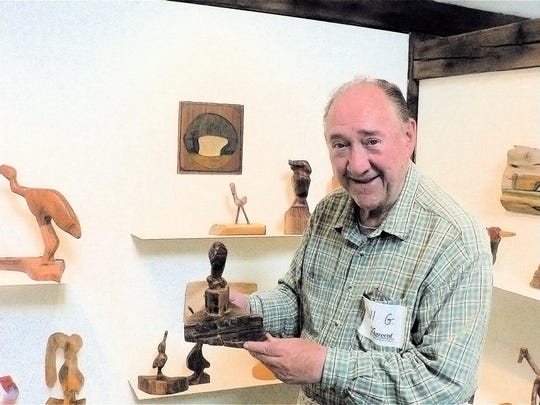 Bill Graham and some of his wood carvings. In recent years he has spent more time on arts and crafts. (Photo: John Oncken)

Graham summarizes the growth of Agrecol: “With Agrecol we didn’t have a core business, everything was an experiment, we kept reshaping the company looking for something that was right and would make some money. We finally turned to what grew here to begin with — the original grasses and flowers of the prairie that the pioneers found when they settled here. ”

During the 90s and early 2000s  Bill Graham entered a large number of  businesses, not all of which were successful. These included: The International Chamber of Agriculture;  greenhouses; landscaping, restaurants and financing businesses for others. 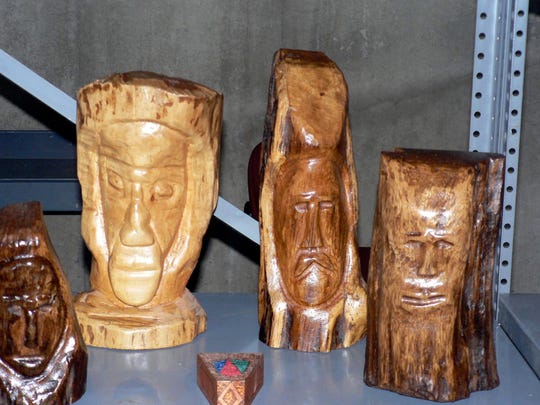 Some years ago Graham built a gallery on his house to display his works. (Photo: John Oncken)

Graham suggested that he was a “Ready, Fire, Aim,” kind of guy, (note — read those three words again) something that has never changed.

I knew Bill Graham, sort of well, and did some writing projects for Agrecol. I especially enjoyed his World War II stories and found it hard to envision this man being shot down twice in his B17 bomber.

Once on March 16, 1944, over the English Channel from where he and other crew members were rescued by an English Flying Boat. Then, just 13 days later, he was again shot down over Germany, parachuted down, was captured by German soldiers and spent 14 months in Stalag 17 an Austrian POW camp. (Remember the 1950 movie?). Over his confinement, his weight dropped from 195 to 142 pounds.

Upon his return to America he had a choice of where wanted to be released from the service. A friend suggested that Madison, Wisconsin, was a nice town which had an Army Air force radio School at Truax Field (a requirement as Bill was a radio operator). And, that’s what he did.

Bill and his wife Beth lived in the trailer park at Camp Randall while Bill attended the UW, something he was not interested in. Instead, he worked part time for a typewriter company on State Street selling typewriters in the Madison area.  This led to his invention of his typewriter cleaning brush and rubber backed pad and ultimate formation of his very successful W.T Rogers Co. and later involvement in agriculture.

In his later years Graham turned to wood carving, painting and other crafts and lived to age 93.

Yes, Bill Graham was a “true character.” He did things most of us would never think of doing, not always succeeding, but when winning, winning big.

John F Oncken is owner of Oncken Communications. He can be reached at 608-222-0624, or e-mail him at jfodairy@chorus.net.