Back surgery lead to collecting dairy memorabilia for this farmer. 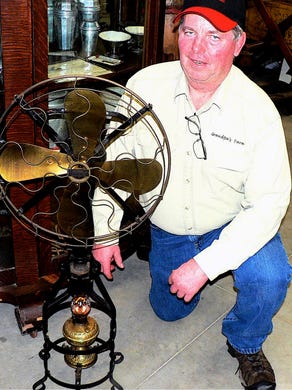 What is it? It looks like two small bull rings attached to a bar. John Oncken
Fullscreen 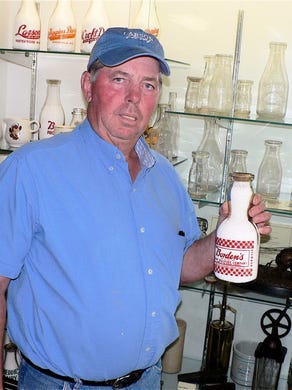 It all started with a milk bottle. John Oncken
Fullscreen

It all started with a milk bottle.(Photo: John Oncken)

Three hours is not nearly enough time to see and enjoy the massive display of dairy memorabilia assembled by Ed Larson longtime dairyman and now a well-known collector of all things dairy — and this is my second visit.

Larson is perhaps best known from his years as general manager of Larson Acres Dairy at Evansville, known throughout dairyland for its innovative and well-managed approach to producing milk. The family-owned dairy (11 family members) milks 2,800 cows and farms some 5,000 acres of land in Rock county and annually  hosts thousands of visitors.

A half dozen years ago, Ed retired as general manager when he decided to “step back” and turn the management responsibilities over to his younger brother MIke.

Back surgery in 2013 and a bit of boredom during recovery led Ed Larson to what could be called a new dairy career. While looking at EBay on his computer he learned that people were having fun collecting dairy memorabilia.

That’s when Ed’s life took a bit of a change. He decided to give collecting old dairy and farming memorabilia a try and bought a milk bottle. This led to what has meant less time on the dairy to a near full-time career of collecting memorabilia that traces the modernization of dairying over the last century or more.

Dairy farms with a thousand (or many more) milking cows are common across all of dairyland today and Double 50 (100 cows) milking parlors are not hard to find. But these kind of dairy farms didn’t just happen overnight, they were in the making for well over 150 years.

Larson now has hundreds of milk bottles — every town had at least one milk bottler — old milk machines and milk buckets, dozens of butter churns and many things I’ve never seen or heard of before.

Larson says. “I have some ‘one of a kind’ items and many old, rare and unique things. “I’m interested in things tied into the history of farming.”

For instance:  As early as the mid 1800s inventors attempted to fashion a milking device with little success but considerable damage to cows. One of those rare milkers is the Roth Milking Machine patented in 1913 that Ed Larson owns. It is a metal tube about six inches long with a spring loaded handle that you squeeze but looks to require more strength than regular hand milking. We agreed that was probably why very few were sold and why this one is so rare.

Sales literature from 1865 describes ‘The American Cow Milker’ as “the most important labor and time saving improvement ever offered — which may be ranked with the reaper, the mower,and the sewing machine ... the four teats of the cow are milked independently ... and is the perfect imitation of the sucking calf.”

Ed has one of these (it looks new): it involves squeezing two handles and it’s heavy (4 pounds). “I still haven’t figured out if and how this ever worked,” he admits.

In the 1890s, Scotsman Alexander Shiels, developed a pulsator that included suction levels to successfully massage the teat and extract milk. That device, along with the development of a double-chambered teat cup in 1892, led to milking machines ultimately replacing hand milking many decades later in a slow but sure process.

Larson has a sales representative’s model kit of a DeLaval Model F Combine Milker that was used as a sales aid to show potential buyers of the two-cow, cow to milk can, parlor. Ed believes it was a milking parlor dating to the 1940s. 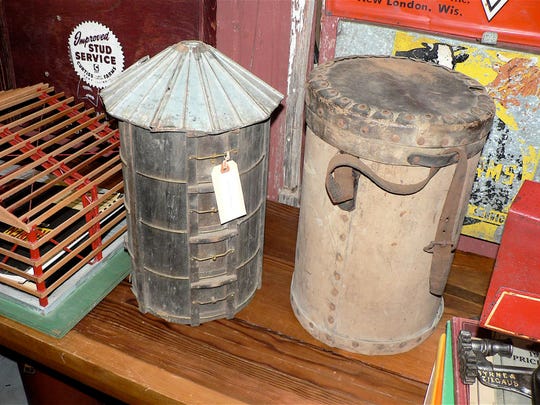 He also has a sales kit for a wooden silo with a metal roof from the early 1900s and a Harvestor sales kit from that company’s early days in the early 1960s. Each of the sales kits were carried around in a case containing the model silo and prepared sales aids.  I had never seen these before but suspect they were of great value to the sales rep and the curious farmer.

It’s sometimes hard to imagine farming without electricity but until about 1940 most farms didn’t have it. This made for lots of innovation by curious and mechanically skilled framers with a farm shop.

“Have you seen one of these before,” Ed asked while standing next to a three foot high fan sitting on the floor with its blade whirling? “It’s a Lake Breeze hot air fan powered by the small kerosene lamp at its base. It  goes back to about 1910 before electricity was on many farms." (Note — It was new to me. I don’t know how this thing works but it was still running three hours later when I left.) 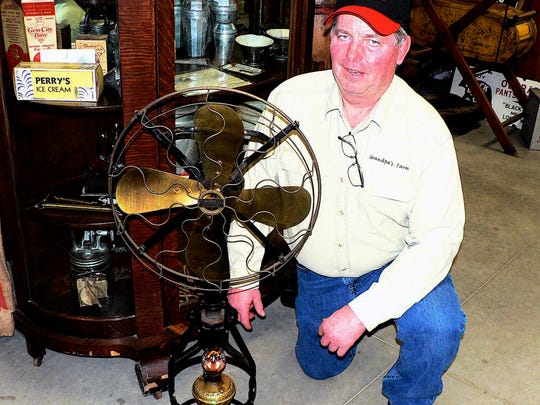 Down the aisle I saw a wooden conveyor-type thing that was maybe eight feet long and rose to about four feet on one end.  Another mystery!

“That was used to power a butter churn,” Ed explained. “It sold for $15 in the Sears catalog and was powered by “a dog, sheep or goat’ endlessly walking up the ramp that turned the churn.”

The huge basement under the Larson Acres farm office is crammed with tables and shelves and the walls are lined with old farm and business signs many which I remember during my younger days including” Funks Seeds, Mautz Paint and yes, even the recently departed Golden Guernsey.

A two-shelf glass fronted cabinet seemed a bit out of place until Ed described it as a cheese cutting and display case (called store furniture) patented in 1899 by two men from Watertown and Fox Lake.  Its purpose was to “provide for the exhibition of cheese unexposed to dust and insects to facilitate retail cheese sales.”

Perhaps not as old but maybe more rare than many things in Ed’s collection of history  is an original True-Type model Holstein cow and bull set dating to 1923 when the Holstein Friesian Association had a committee develop and produce ideal cow and bull models to assist judging at fairs and shows. Prior, each judge had their own ideas of what Holstein cows and bulls should look like.

Only a limited number of the 1/4 scale animals were made with nine going to committee members, 60 to land grant universities, some to the Association and a few made available to the public. Larson set is one of the originals and surprisingly to me they are much larger than the copies often given out at Holstein events.

“I look for the rare and unusual,” Larson says. “I like things with the product and manufacturer’s name still readable so I can find the history of the article.”

“I use EBay, consignment auctions, advertisements, estate sales and even garage sales,” he says.  And, “Someday I’d like to put my collection on public display. Maybe on the farm, or in Madison or Green Bay — somewhere in the state where people could visit and enjoy farming history.”

John F. Oncken owns Oncken Communications, a Madison-based agricultural information company. He can be reached at 608-222-0624 or e-mail him at jfodairy@chorus.net.