Susan and Bob Manzke at the Big Top Chautauqua by Bayfield.(Photo: Susan Manzke)

While waiting for the Big Top Chautauqua show on Saturday we got an email from family on the farm. It showed our grandchildren at Burger Fest. There were photos of them by the parade and watching the hot air balloons take to the sky. They were all having fun and I greatly missed being there. Still Bob and I were having a lot of fun on the bus trip too. I didn’t regret the decision to continue on with our trip plans.

We were about to witness the Old Time Radio Show live production of Canterville Ghost. I was on the edge of my seat as the performers came on stage.

Norman Gilliland introduced the show. The performers were dressed in period costumes. They didn’t stand in one place, but went from microphone to microphone reading their lines. A few of the actors actually had multiple roles. I thoroughly enjoyed the performance.  At the end the audience became part of this live radio show.

A recording of Canterville by the 9XM players can be found online at http://www.wpr.org/listen/1135091.

The next day our bus continued to Madeline Island. We would take a ferry ride across from Bayfield. I wondered about this water crossing. Would the bus cross with us? It didn’t seem feasible that the bus could fit on the ferry. 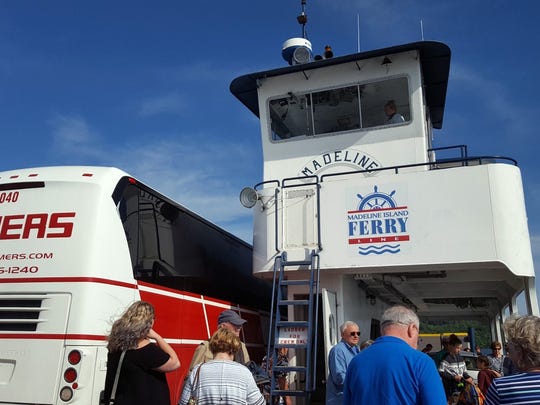 As we neared the dock, I expected to be asked to exit the bus and walk onto the ferry, but we stayed in our seats. The entire bus, with all 56 passengers plus the bus driver (57 total), was directed toward a waiting car ferry.

There were already cars on the boat, but they waved our driver into the center lane. That was our spot.

When we rolled from land over the ramp and onto the ferry, I held my breath. I continued holding it until we were stopped in the center of the ferry and the bus motor was turned off. (Breathe.) A lot of people watched this boarding both from on shore and aboard the boat. It’s not something seen every day - at least not by vacationers.

When on the island, a tour was given to us by a woman who lives on the island year around - only about 250 people live year round on Madeline Island. She told how travel by ferry is interrupted by winter most years. Not until the ice is twelve inches thick can cars drive across to the mainland, and only on the designated road marked by cut evergreen trees - I think you have to be a certain breed of person to cope with northern island living. It’s not for me.

After our tour, we could roam about the town of La Pointe. Bob and I went to the island museum and learned more about Madeline Island’s history.

When it came time for the return ferry ride, I wished I could watch the bus load from the shore. It would have been neat to see and photograph, but I didn’t ask for the privilege.

While crossing to Bayfield, many of us got off the bus to experience the ferry ride from on deck. The blowing wind and the spray from Lake Superior made it all the more exciting. When disembarking, I again held my breath. It was just too strange to roll from boat to shore, crossing that ramp. Of course, we made it without a hitch.

Our second evening show at Big Top Chautauqua was a new original production by the Blue Canvas Orchestra called “Superior!” This tribute to this great lake was excellent. I was impressed by the wonderful local talent and can’t wait to see another show - even “Superior!” again.

Monday dawned rainy. Our day started at the Great Lakes Visitor Center which was another delightful stop. Most of the day was spent driving south. It sure was nice to have someone else do the driving. All in all, it was a trip worth repeating - maybe next year.