Pence accused the Chinese government of orchestrating an “unprecedented effort to influence American public opinion,” the 2018 and 2020 elections. 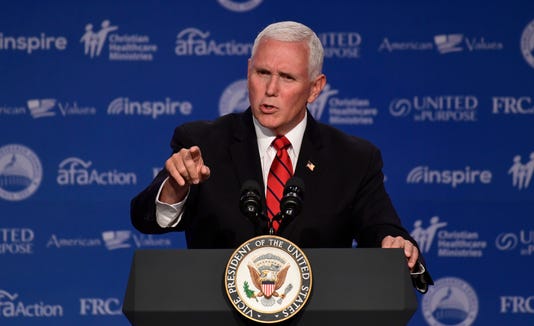 WASHINGTON – Vice President Mike Pence on Thursday accused the Chinese government of orchestrating an aggressive military, economic and political campaign to expand its influence inside the United States and across other regions of the world.

“China has initiated an unprecedented effort to influence American public opinion, the 2018 elections, and the environment leading into the 2020 presidential elections,” Pence said in a highly anticipated speech to the Hudson Institute, a conservative Washington think tank.

Pence offered a few additional details about what he said were the “proactive and coercive ways” China is trying to manipulate U.S. domestic policies and politics.

“Beijing has mobilized covert actors, front groups, and propaganda outlets to shift Americans’ perception of Chinese policies,” Pence said. The vice president said a senior American intelligence official told him “what the Russians are doing pales in comparison to what … China is doing across this country.”

Russia has engaged in a widespread disinformation campaign to sway American elections and divide the U.S. electorate, most notably in the 2016 presidential contest. After that election, the U.S. intelligence community issued a public report concluding that the Russian government had directed an effort to help elect Trump.

Some skeptics have questioned the Trump administration's accusations against China, suggesting it is an effort to divert attention away from Russia's ongoing meddling in the 2018 midterm elections.

"It's a distraction" and an effort to turn the GOP base against China, said Clint Watts, a research fellow at the Foreign Policy Research Institute and author of "Messing with the Enemy: Surviving in a Social Media World of Hackers, Terrorists, Russians, and Fake News."

Trump last week singled out a four-page advertising supplement that a Chinese-government media company placed in Iowa’s largest newspaper, the Des Moines Register, as evidence of the Asian country’s propaganda campaign. The president said China was trying to undermine him because of his aggressive stance on trade, including his decision to slap tariffs on $250 billion worth of Chinese goods shipped into the U.S.

Pence also highlighted those advertisements in his speech Thursday. And he said China has tailored its retaliatory tariffs to hit states that will be pivotal to the outcome of the 2018 election.

"By one estimate, more than 80% of U.S. counties targeted by China voted for President Trump and I in 2016," Pence said. "Now China wants to turn these voters against our administration."

But Watts said the newspaper ads and tariffs cannot be compared to the secret disinformation campaign launched by the Russians in the 2016 election. The Chinese government, he said, is making an overt, public argument against Trump's trade policies to those most affected: American farmers.

"It’s not even the same thing as the election interference," Watts said. "They’re wielding economic influence, and it just shows how fundamentally weak the Trump administration is at understanding the conflicts they’re in."

As White House officials seek to highlight China's activities, Watts added, they have downplayed or even ignored Russia's ongoing meddling.

In his speech Thursday, Pence also accused China's Communist Party of using rewards and coercion to influence American businesses, universities, and think tanks, and government officials. He said, for example, that China threatened to deny a business license for a major American corporation unless it spoke out against the Trump administration’s trade policies.

"Beijing compelled Delta Airlines to publicly apologize for not calling Taiwan a 'province of China' on its website. It also pressured Marriott to fire a U.S. employee who liked a tweet about Tibet," the vice president said.

He linked those alleged activities to China's broader effort to extend its military and economic power across Asia and Africa.

He accused China of "reckless harassment" of the U.S. Navy during operations in the South China Sea. And noted that China has used “debt diplomacy” to expand its influence in Africa and elsewhere, offering billions of dollars in infrastructure loans aimed at benefiting China's access to ports and other key transit hubs.

In an interview with NPR before Pence's speech, China's Ambassador to the U.S., Cui Tiankai, downplayed China's global aspirations.

"Our priority, our most important task is still to run our own country well," Cui said. "But we also understand China cannot develop and modernize in isolation. We have to build strong ties with the rest of the world. We have to further integrate into the global economy and the global governance, and we are ready to take up more responsibilities and make greater contribution in this regard."

Even as Pence portrayed China as a pernicious threat, he said Trump had cultivated "a strong personal relationship" with China's president, Xi Jinping, and asserted that rapport could lead to a thaw in U.S.-China relations.

"Today, America is reaching out our hand to China," Pence said, "and we hope that Beijing will soon reach back."