Secretary of State Mike Pompeo said Thursday he would be returning to North Korea to pursue an agreement on denuclearization. 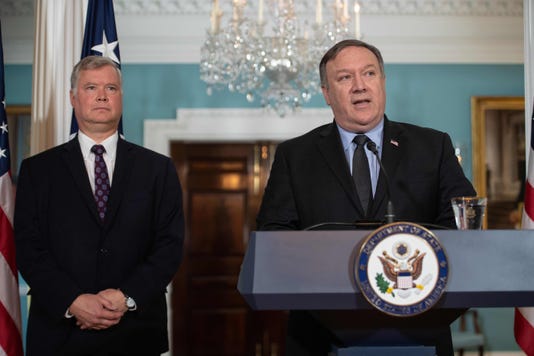 WASHINGTON – Secretary of State Mike Pompeo said Thursday he would be returning to North Korea to pursue an agreement on denuclearization – his second visit in two months to the rogue regime.

Pompeo also announced the appointment of a new special representative for North Korea: Stephen E. Biegun, who is leaving a post at the Ford Motor Company where he served as vice president of international governmental affairs. Biegun previously served as a top national security adviser during the George W. Bush administration, working as a senior staff member to then-National Security Adviser Condoleezza Rice, among other positions.

During a highly publicized summit on June 12 in Singapore, President Donald Trump and Kim signed a vaguely worded agreement in which North Korea promised to work toward a “complete denuclearization of the Korean Peninsula.”

Sec. of State Mike Pompeo formed a group to coordinate and run U.S. policy toward Iran as the Trump administration moves ahead with efforts to force changes in the Islamic Republic's behavior after withdrawing from the 2015 Iran nuclear deal. (Aug. 16)

Pompeo visited North Korea in July in an effort to follow up on that promise. But his meetings there did not seem to produce any concrete results. Indeed, the North Koreans accused him of making “gangster-like” demands to give up the country’s nuclear weapons and seemed to back away from the denuclearization pledge.

On Monday, a United Nations watchdog organization reported there were no signs that Kim Jong Un's government has stopped its nuclear weapons activities. The International Atomic Energy Agency said "the continuation and further development" of North Korea's nuclear program is "cause for grave concern," according to an Aug. 20 report.

Pompeo did not take any questions from reporters at Thursday’s announcement. In a statement before the cameras, he said Biegun would accompany him on the trip to North Korea.

“He and I will be traveling to North Korea next week to make further diplomatic progress towards our objective,” Pompeo said. He said the State Department had laid “the groundwork to hold North Korea accountable to the promises that Chairman Kim has made.”

State Department spokeswoman Heather Nauert would not provide further details about the timing or focus of Pompeo's trip. She did say Pompeo had "no expectations of meeting with Chairman Kim" during the visit.

"We have no plans for a meeting of that sort," said Nauert, who defended the trip amid skepticism about North Korea's commitment to denculearization.

"This is more of a normalization" of the dialogue between the U.S. and North Korea, she said in explaining why Pompeo has not demanded concrete progress toward denuclearization before traveling to North Korea again.

Pompeo said Biegun would direct U.S. policy toward North Korea and lead the denuclearization negotiations with other American allies.

"The president has created an opening and it’s one that we must take by seizing every possible opportunity to realize the vision for a peaceful future for the people of North Korea," Biegun said Thursday. "This begins with the final fully-verified denuclearization of North Korea.”