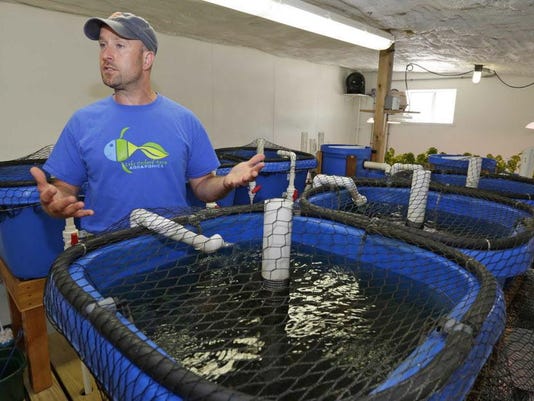 Nate Calkins talks about his farming techniques by one of his his tilapia fish tanks at Lake Orchard Farm Aquaponics near Haven.(Photo: Gary C. Klein/USA TODAY NETWORK- Wisconsin)

At a family farm between Manitowoc and Sheboygan that predates the Civil War, plastic fish tanks holding fresh-water tilapia now occupy the same space heifers did just 18 months ago.

Six times a day, the farm's sixth-generation owners visit a converted free-stall barn to feed their 2,600 fish, which leave behind nutrient-laden waste used to feed vegetables growing year-round in a 4,000-square-foot greenhouse nearby.

While the farm's first 168 years were sustained by cows, chickens and fruit orchards – the future now rests with this fast-growing fish and its symbiotic relationship with lettuce, tomatoes and other common food crops.

'It is the future of this farm,' said Mary Calkins, who operates the Lake Orchard Farm with her husband, Nate. 'It's sustainable, and it's something that people value.'

The couple launched their commercial aquaponics operation in December and now sell tilapia, lettuce, tomatoes, basil and other crops to Sheboygan's Goodside Grocery, Woodlake Market in Kohler and to restaurants in Manitowoc and Sheboygan counties. Trust Local Foods out of Appleton has also begun distributing it to businesses in the Fox Cities.

In the future, they're also considering adding walleye, which similar to tilapia, thrives in an aquaponic environment but has more culinary appeal with Wisconsinites.

The couple says aquaponics operations like this could become more common at family dairies in Wisconsin, as farmers look to diversify or get out the dairy industry altogether.

'I hope it explodes,' Nate said. 'I've had farmers take tours and walk out of here saying I've got to rethink this because I was going to put $4 million into my parlor, and I could build this for less than a million and produce sustainable food year-round.'

The new venture marks a significant shift for the farm, which found itself at a crossroads after the Calkins realized that to stay competitive in a U.S. dairy industry increasingly dominated by massive farms, they either needed to grow exponentially or try something different.

They decided on the latter.

The Calkins have since opened a four-room bed and breakfast inside a former chicken hatchery on the property, which overlooks Lake Michigan. They also turned a farmhouse into a vacation cottage and opened a 9-hole golf course for guests.

This summer, they plant to turn an old dairy barn into a space to host weddings.

Mary's parents had focused entirely on raising replacement heifers at the farm before retiring about a decade ago, and the couple still does so today at a much smaller scale, though they're considering shifting to grass-fed beef next year.

However, aquaponics, which they came across several years ago in a farming magazine, has quickly become the focus of their business.

'It's been an easy sell, especially to restaurants,' Nate said.

They're currently selling 750 heads of lettuce a week, with capacity to do much more, and along with 15-20 pounds a week of cherry tomatoes. They also sell a considerable amount of basil and herbs, while producing about 2.5 tons of fish fillets a year.

Unlike a conventional farm, their greenhouse allows them to grow 365 days a year, with grow lights and a heater used in winter. And because it's a contained system where pests and other issues are easily managed, the crops come out looking uniform.

'When you go to a chef to sell a head of lettuce, they can use every bit of it,' Nate said.

The biggest challenge is the products sell at a much higher cost than conventional produce.

The benefit is that it's fresher than anything offered at a retail store, as all the farm's deliveries are either harvested the day of the delivery or the afternoon before.

'People get used to the cost of food being X, and now it's twice as much and they need massive amounts of justification for why they should pay that much more,' Nate said.

Inside the greenhouse, crops are planted one seed at a time in Styrofoam rafts floating in water that's been fertilized by the fish and then naturally filtered by bacteria before being pumped to the greenhouse.

The process uses no soil, meaning there are no weeds or need for herbicides. Instead, the plants are staked in stone plugs and placed in holes cut into the Styrofoam, which allows the roots to drop into the water and absorb nutrients.

Midge flies and other pests can hatch in the water, though the couple releases beneficial bugs by the millions that eat unwanted insects, rather than using pesticides.

The entire process has zero waste. The only byproduct is from fish waste that's not used by the plants, but it can be sold as fertilizer to area farmers.

'It's amazing, to be honest with you,' Nate said. 'And this is not rocket science. What created it was science. But from an operating standpoint, it's really pretty simple.'

That's of course coming from a former structural engineer, which is a career Nate left when his wife's parents inquired if the couple wanted to take over the family business.

The venture has allowed Mary to move back to the farm she grew up on and to see it continue, while also raising their two young children there. She's since left her part-time job working as a guidance counselor in the Sheboygan Area School District to work full time at the farm.

'It's wonderful,' Nate said. 'You're in a lush environment that's like the tropics, 365 days a year, with green, oxygen-producing plants everywhere around you. I wouldn't trade this for the world.'