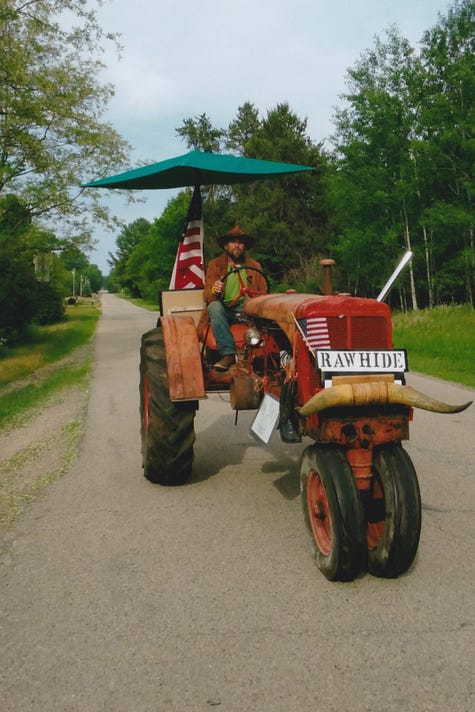 Sporting a mount of Texas Longhorn steer horns, Ed Wendtland and his 1937 Allis Chalmers WC tractor get into character for the theme of the 2018 Copperfest Parade - favorite TV shows.(Photo: Submitted)

What do you do with a skeleton of a tractor?

The answer is easy if you're Ed Wentland, who spent years hunting down the missing parts in order to rebuild the 1937 Allis Chalmers WC tractor.

The Oconto man admits he has always been partial to the John Deere tractors that he grew up with on his family's farm. The steep price tag, however, increased his fondness for the more affordable Allis Chalmers line.

"My uncle, Wallace Wentland, a WWII veteran used to work for Allis Chalmers and I think he would have enjoyed watching me put her back together again."

Without even an engine or a steering assembly on the faded orange body, Wentland started his slow, but sure search that would take him across Wisconsin and even into Illinois in his quest to find original parts.

His scavenger hunt for parts would take him to Kiel where he found the hood, gas tank and fenders, and then on to Gillett for the radiator bearing the name Allis Chalmers. A trip to a salvage yard and Fond du Lac would produce the manifold, while a long trip over the Illinois border would land him the air cleaner.

Near the Michigan border, Wentland secured tires for the tractor and finally a steering wheel from Cecil. Finding the missing bolts was also on his list of missing items.

"I can't tell you how many times I would call places that never returned my phone calls," said Wentland.

While Wentland collected the parts, the tractor sat in a workshop, waiting for him to find a spare moment to dive in on the restoration project. Slowly he began rebuilding the engine and assembling the tractor, piece by piece.

"It was slow going because I was also working a full-time job," said Wentland, who also called a friend to help make adjustments on the clutch. "It wasn't a project that you finish in a year, I'll tell you that."

When he finally got the machine restored and running, he made a phone call to the man he originally bought the tractor from.

"He was pretty surprised at the time. He told me the tractor should have ended up in a salvage yard but was pretty happy I bought it and got it to run again," Wentland said.

Wentland was pretty content to use the tractor for odd jobs around his small farm, where he and his wife, Donna, raise Texas Longhorns to sell. And for one afternoon a year, Wentland and his tractor head into town to participate in the annual Oconto Copperfest parade.

"This year's theme was favorite TV show," Donna said. "He went with an oldie but good one: Rawhide."

"We decked the tractor out with a toy rifle tied on the brake handle, a Rawhide sign in front, a pair of cowboy boots, one tied on each side of the tractor, and a set of Texas Longhorn steer horns tied on the front," Donna said.

And fastened to the back of the tractor under the American flag was a sign honoring Wentland's friends who have passed away.

Following the parade, Donna headed home to wait for Ed to return with the tractor. After depositing the tractor at home, the couple had plans to return to check out the rest of the days' festivities including the car show.

Still waiting, Donna checked her phone for missed calls and found her husband was still at the park waiting for her.

"He told me he entered the car show. And I replied, 'With your tractor?' He told me the show organizer, Crystal Whealon, persuaded him to enter it anyway," she recalled.

As the festival began winding down, the Wentland's headed for the tractor to ready it for the trip home before dusk.

"We ran into Crystal who told Ed to go and check out the seat of his tractor, assuring him he would like what he saw," Donna said.

Wentland was all smiles when he found an award on the orange seat of his 81-year-old tractor, recognizing the old machine for third place in the special interest category.

While his tractor doesn't have gleaming fenders or any polished chrome, it does have a special, interesting story that Wentland is happy to share with anyone willing to listen.