No longer a cosmetic leaf disease, tar spot is resulting in severe damage in some corn fields around the state.

Farmers have been dealt a challenging hand this year.

Despite a freak April snowstorm that set the planting season back, optimism on the farm grew as farmers watched crops grow and flourish under ideal weather conditions. At least until a stubborn weather pattern in August brought one storm system after another, dumping record amounts of rainfall.

Two months later, wet soil conditions are still hampering the harvest. Adding to the sense of urgency now is a new disease that is threatening the corn crop in fields around the state, especially in the southern third of Wisconsin.

Damon Smith, University of Wisconsin extension plant pathologist, says that farmers with corn fields threatened by tar spot disease have switched their focus from harvesting soybeans to getting the corn off as soon as possible.

When the disease first appeared in 2016 late in the growing season, experts felt it was more of a cosmetic issue rather than an economic concern.

"In 2016 and 2017, the disease moved in late enough that is was more of a visual anomaly and didn't cause any yield losses," Smith said. "It caused a little early dry down but it really didn't affect anything." 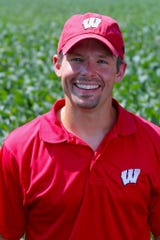 This year the disease showed up earlier and is making its presence known in a big way.

"We had folks sending us disease pictures in mid-July which is a month earlier than previous seasons," said Smith. "Now we're beginning to see some yield impacts."

Researchers from Purdue Extension say tar spot originated in Mexico and Latin America and favors cool, humid conditions with long periods of leaf wetness that is conducive to the development of foliar disease.

They believe that the organisms were spread through a tropical storm system that pushed the disease up into Indiana and Illinois in 2015. The disease, which appears as black spots on corn leaves surrounded by light brown halos was first identified in southwestern Wisconsin in 2016, and it is able to survive on stalks, leaves and plant residue in fields.

RELATED: Be aware of grain quality during this harvest

RELATED: Harvesting moving slow and muddy across much of Wisconsin

Plant experts also maintain that the tar spot fungus, combined with other foliar diseases such as northern corn leaf blight and gray leaf spot work together to compromise the integrity of the stalk and subsequently the yield.

"All of these leaf diseases reduce the capacity of the plant to make food, so that the ear actually scavenges nutrients from the stalk, which causes the stalk to weaken," Smith said. "Now the concern is getting the crop out of the field. We're already wrestling with rain and we've seen a lot of stalk lodging already and issues with just trying to pick up this corn crop."

Farmers in counties with tar spot are advised to harvest corn as soon as possible. (Photo: Colleen Kottke/Wisconsin State Farmer)

While the tar spot first appeared in fields in the southwest corner of Wisconsin in 2016 and 2017, the disease is on the move. Smith said this year he has been keeping track of disease reports across the state.

"It was originally contained to southwest Wisconsin, but now tar spot encompasses every county in the southern third of the state, even on up as far north as Brown County," Smith said. "As a researcher, I didn't think it was going to be at levels like this. We figured we would probably see it again but not like this. The weather certainly played an important role this year."

Smith says that corn diseases have kept him busy this year. During research trials he has discovered gray leaf spot, northern corn blight, tar spot and high levels of ear rot.  These disease stress the corn plants and leave them vulnerable to secondary issues including mycotoxins.

Although the organisms that have been identified in the tar spot disease are not known to produce mycotoxins—a toxic substance produced by a fungus—Smith said he has concerns about mycotoxins as a secondary issue in some of these fields. 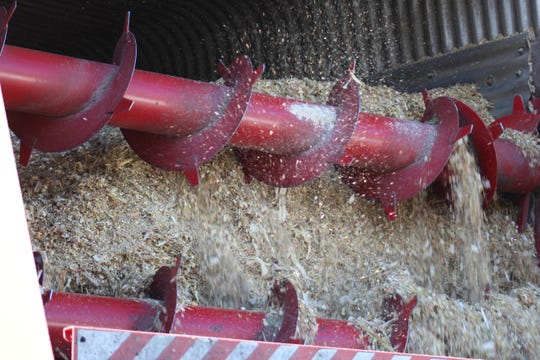 It's important for farmers to test silage and grains for the presence of mycotoxins, specifically vomitoxin. (Photo: Colleen Kottke/Wisconsin State Farmer)

"We've picked up some elevated mycotoxins, specifically vomitoxin," Smith said. "We saw this early on when the silage started to come out and we're seeing elevated vomitoxin levels in the grain fields as well. So it's important for folks to test their crops so they know what's out there in their fields."

Smith says it's likely that tar spot will appear again next year. Since research was first released out of Mexico, researchers say there is good evidence to suggest that the fungus has the ability to overwinter in Wisconsin.

In the meantime, Smith has joined plant pathologists throughout the Midwest and the Corn Belt to develop outreach materials for farmers based on this year's field data.

Dubbed the Crop Detection Network, experts will gather and analyze data from field trials across the Midwest.

"We're mainly focused on corn hybrid tolerance and fungicide efficacy. Those are the big questions that farmers have," Smith said.

Like farmers across the Midwest, Smith says Wisconsin researchers are also waiting to get into fields so they can complete field trials and begin analyzing and organizing data to be presented in outreach materials for farmers at upcoming meetings.

"Our intent is to get that data analyzed and to develop some management recommendations based on that information which we will distribute to farmers at upcoming pest management meetings and the series of winter meetings," Smith said. "We have some things in play right now, but we want to make sure they're research-based."

Smith says he's heard from multiple farmers who had such high hopes three months ago.

"When they looked at their corn crop in July, they thought they had the best crop they've ever seen and by mid-August that sentiment had been pretty much blown out of the water," Smith said.

While it's been a tough year, Smith was encouraged by recent yield numbers.

"Near the epicenter of the epidemic we were able to detect yield losses in those hard hit fields," Smith said. "One hybrid that we rated during one trial, we saw a 30 bushel loss per acre in a field heavily hit by tar spot. The yields still were up 200 to 225 bu/acre. They weren't going to get the 250 bu/acre they were expecting. So, it wasn't a complete loss either," he said.