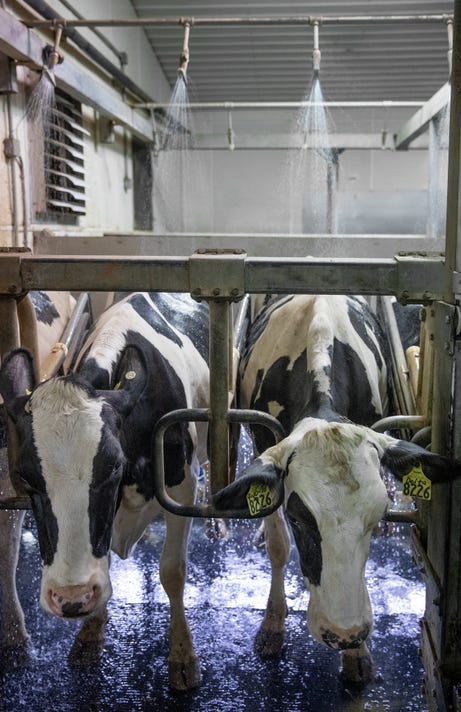 Milking parlor showers spray down on cows as they are milked at Rosy-Lane Holsteins in Watertown, Wis., Wednesday, Aug. 29, 2018. The showers, which help cool the cows on warm days, are aimed at their backs and away from their udders and faces.(Photo: Michael P. King/UW-Madison CALS)

On hot days, the cows at Rosy-Lane Holsteins are given cool showers while they’re being milked. And the farm’s newborn calves are housed in pairs to enhance their social and cognitive development.

Jennifer Van Os wants to know how those ideas are working out—for the cows and the farm.

Van Os is eager to learn about strategies that Wisconsin farmers employ to promote cow comfort. Since she joined the University of Wisconsin–Madison faculty last spring as an assistant professor of dairy science and extension animal welfare specialist, she has traveled the state to meet with milk producers, processors and others concerned about the well-being of Wisconsin’s signature farm animal.

“I wanted to see what people in the industry considered to be their strengths and challenges when it comes to animal welfare. I perceive that there’s a lot of support for my position,” she says. “A lot of farmers understand that they’re facing public scrutiny, and to be truly sustainable, you need public acceptance for agricultural practices.”

That sentiment is echoed at Rosy-Lane Holsteins, a 950-cow operation just south of Watertown operated by partners Lloyd and Daphne Holterman, Tim Strobel and Jordan Matthews. 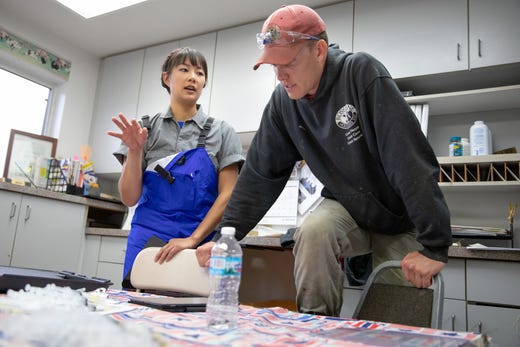 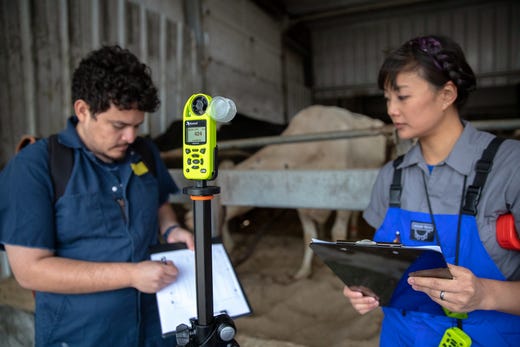 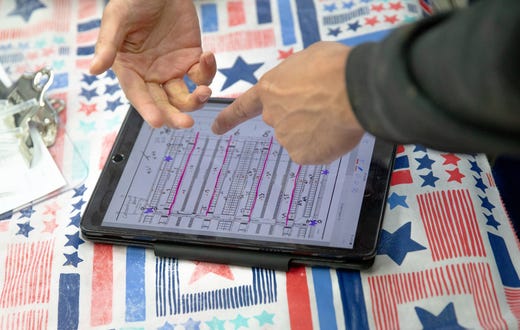 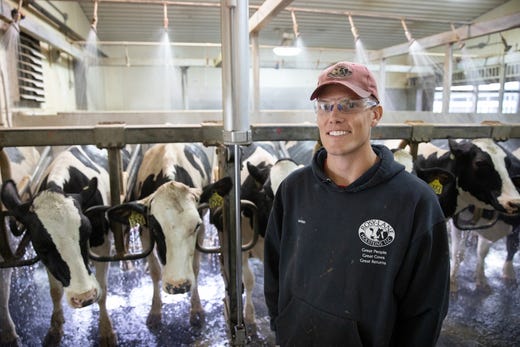 Jordan Matthews, one of four partners at Rosy-Lane Holsteins, poses for a picture near milking parlor showers that have been installed and are in use at Rosy-Lane Holsteins in Watertown, Wis., Wednesday, Aug. 29, 2018. The showers, which help cool the cows on warm days, are aimed at their backs and away from their udders and faces. Michael P. King/UW-Madison CALS
Fullscreen 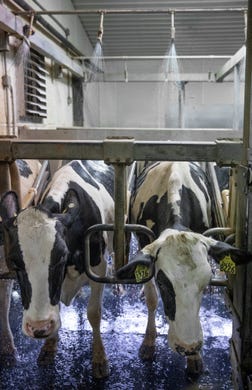 Milking parlor showers spray down on cows as they are milked at Rosy-Lane Holsteins in Watertown, Wis., Wednesday, Aug. 29, 2018. The showers, which help cool the cows on warm days, are aimed at their backs and away from their udders and faces. Michael P. King/UW-Madison CALS
Fullscreen 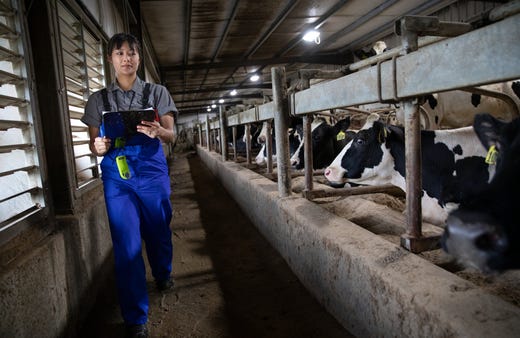 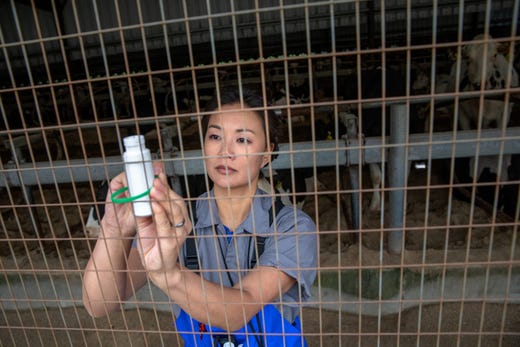 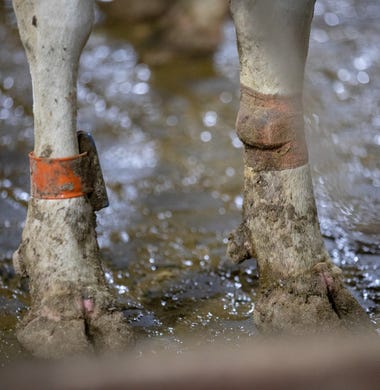 “Jennifer came to Wisconsin at a really critical time,” says Lloyd Holterman. “The whole dairy industry is all about animal care.”

“Everyone in the dairy community—farmers, processors, everybody who touches the product—has got to do better,” adds Daphne Holterman. “We’ve always been concerned about our cows’ welfare, but it’s kind of been in the back of our minds. Now it has moved to the forefront. We know we have to pay more attention and we have to start telling people what we’re doing and why.”

Rosy-Lane Holsteins was the first Wisconsin farm Van Os visited and she was impressed by the partners’ purposeful approach to animal welfare and their willingness to try new methods. So she decided to set up her first collaborative research project there, using funding from her faculty start-up package. One thing she wanted to study was the idea of showers in the milking parlor.

“I’ve never seen it done on a dairy before, and it intrigues me,” she says. 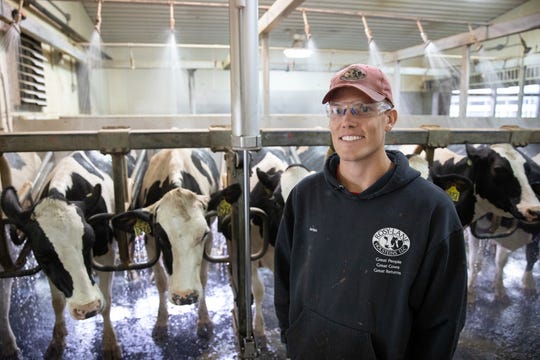 Jordan Matthews, one of four partners at Rosy-Lane Holsteins, poses for a picture near milking parlor showers that have been installed and are in use at Rosy-Lane Holsteins in Watertown, Wis., Wednesday, Aug. 29, 2018. The showers, which help cool the cows on warm days, are aimed at their backs and away from their udders and faces. (Photo: Michael P. King/UW-Madison CALS)

Van Os is very familiar with the water-spray systems used to keep dairy cows cool. She earned her Ph.D. in California studying how cows respond to sprinklers in holding pens and feeding areas. Those systems can be effective, she says, but they’re pretty inefficient.

“Cows move around and they bunch up. So you waste water spraying where there are no cows, and you could be applying more spray to some animals than others,” she says.

Rosy-Lane’s solution was designed by Lloyd Holterman, Jordan Matthews and Dan Pauli, the farm’s plumbing contractor. “We had this wild idea: let's put showerheads over the stalls in the parlor,” says Lloyd Holterman. “We feed it with water that’s already been used to cool milk.”

This way the water lands on cows rather than empty spaces, the spray is consistent from cow to cow and it’s targeted to optimize health and comfort—on the hips and back, away from udders (to reduce risk of mastitis) and away from faces, which is of particular interest to Van Os.

“Our research and other studies have found that cows don’t like to be sprayed on the face,” she says. “When we think about welfare we're thinking not just about biological benefits, but also about whether they’re having a positive or negative emotional experience. If we can avoid spraying their faces, maybe it's a more pleasant experience for them.” 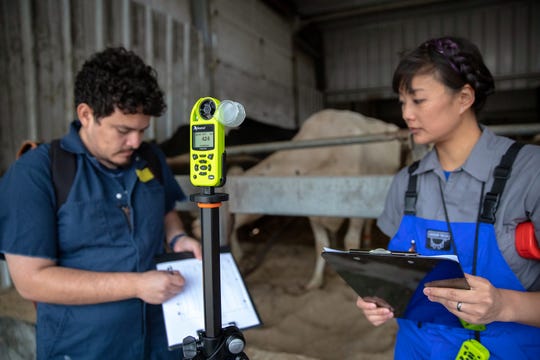 Rosy-Lane’s partners think the system is effective and hope that Van Os can confirm that. She and her students are monitoring the cows’ heat load, recording things like body temperature, respiration rate and panting, as well as how much time the cows spend lying down—a good indicator of cow comfort.

Van Os is also interested in a new practice in the calf barn. For years, Rosy-Lane’s newborns were housed individually. That’s common on Wisconsin farms: isolating calves to reduce the risk of disease. But recently, the farm’s calf team doubled the pen size and began housing newborns in pairs. They did this after hearing about research suggesting that isolating calves may hinder their ability to cope with changes they’ll encounter later on. That study at the University of British Columbia (where Van Os did postdoctoral research) found that cows that had been housed in pairs or groups as newborns adapt better to new routines—like moving to a new barn or a new milking protocol.

“It's good for their social and cognitive development and there are potential production gains,” Van Os says. “Evidence has shown that it helps reduce stress during weaning and improves weight gain after weaning.” 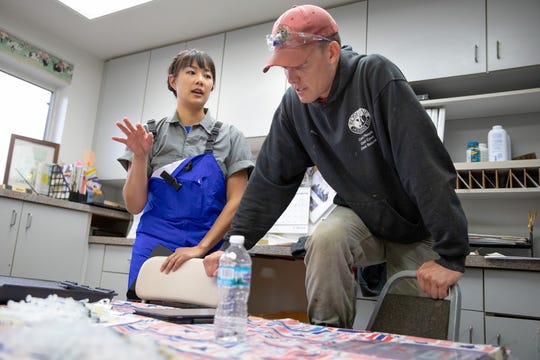 Calves’ cognitive development is one of Van Os’ special interests. She plans to do a full-blown study on calf pairing in outdoor hutches at the UW Arlington Agricultural Research Station. So she’s pleased to have the opportunity to observe the practice on a working farm.

“It's very nice to work with a farm where the things we’re looking at were their idea,” she says. “It's not some zany idea that we came up with in the university and now we're trying to get people to adopt it. We want to see how this works on a real operation that faces the same challenges that any non-research operation would face.”