Gardeners provide an incredible, healthy gift to those in need in the Eau Claire area.

Deirdre Jenkins picks peppers Friday, Sept. 7, 2018, in the shared garden portion of the Forest Street Community Garden in downtown Eau Claire, WI. Gardeners at the site have donated thousands of pounds of food in recent years to The Community Table, providing those in need with fresh, healthy options.(Photo: Julian Emerson, AP)

EAU CLAIRE - The tomatoes, peppers, squash, zucchini and other vegetables a group of local gardeners grow in their downtown Eau Claire plot are a sign not only of their affinity for quality food but of their caring for those without much access to healthy meals.

Members of the shared garden, a part of the Forest Street Community Garden along that street, have donated hundreds of pounds of vegetables this summer to The Community Table, a nearby location that serves daily meals to those in need. Other gardeners at the site also have contributed food, the Leader-Telegram reported.

"To know that the healthy, fresh food we are donating goes to people who really need that food, it makes you feel fulfilled," said Deirdre Jenkins, a shared garden member who is coordinating the food donation effort. "It is such a wonderful thing to be a part of."

Jenkins discussed the partnership between the community garden and The Community Table as she recently picked peppers at the organic garden site. She marveled at the variety of peppers available and at their bright, multi-hued colors. 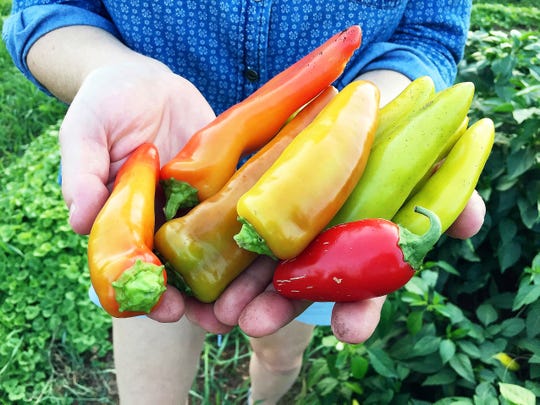 Deirdre Jenkins picked peppers Friday, Sept. 7, 2018, in the shared garden portion of the Forest Street Community Garden in Eau Claire, WI. Gardeners at the site have donated thousands of pounds of food in recent years to The Community Table, providing those in need with fresh, healthy options. (Photo: Julian Emerson, AP)

"Those are some hot ones," she said, pointing to a group of red and yellow varieties ready for picking.

"We really wanted to offer the people eating there a variety of vegetables," said Jenkins, who has been involved with the community garden since 2015.

People eating meals at The Community Table have noticed the vegetables available this summer. In addition to the garden, fresh produce also has been donated by the Eau Claire downtown farmers market and Solheim Market Gardens in rural Eleva, operated by former Community Table executive director Rachel Keniston.

People eating dinner at The Community Table, 320 Putnam St., discussed the additional vegetables they were able to eat this year. Because of the abundance of vegetables, patrons could take leftover veggies home with them.

"It was great having all of these vegetables here," said Emily Place, who eats at the site and volunteers there. "People really appreciated having access to so many healthy foods."

Those eating at The Community Table listed tomatoes as their favorite donated vegetable and said they also appreciated beans, cabbage, squash and other offerings. Some said they are less enthusiastic about kale.

"I really like vegetables, but that's not one of my favorites," one man dining said of the dark-green food. 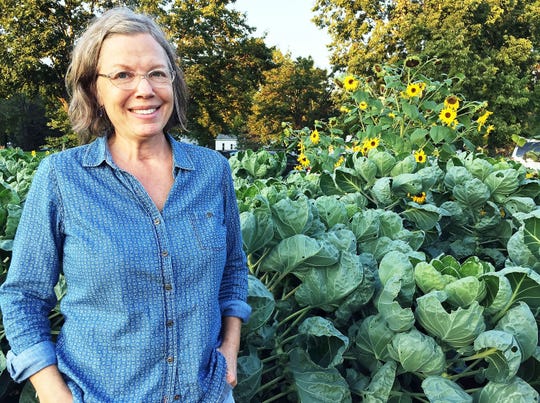 Deirdre Jenkins posed Friday, Sept. 7, 2018, in the shared garden portion of the Forest Street Community Garden in Eau Claire, Wis. Gardeners at the site have donated thousands of pounds of food in recent years to The Community Table, providing those in need with fresh, healthy options. (Photo: Julian Emerson, AP)

Michelle Koehn, executive director of The Community Table, called the summertime vegetable donations "an incredible gift." She said the plethora of veggies given to the agency is an example of Eau Claire's generous spirit.

"This is so powerful because it is about neighbors feeding neighbors," Koehn said in between discussions with personnel at the site. "It is powerful for the people who eat meals here."

The Community Table patrons have appreciated the many vegetables donated, Koehn said. The variety of foods given this year allowed volunteers to not only make more healthy meals but to offer a wide palate of dishes, she said.

So many veggies were donated, she said, that some were sent home with people eating meals. A recent spate of tomatoes was turned into spaghetti sauce that will be available to eat over the winter, she said.

"We were given so many vegetables ... I've probably eaten more zucchini this summer than I ever have before," Koehn laughed.

The appreciation by those at The Community Table for the food they donated was welcome news to Jenkins and others affiliated with the community garden. The garden was founded in 2010 at the site of former homes along the Chippewa River that were torn down in the 1990s because of flooding there.

Since 2010 gardeners have made annual donations to The Community Table. Andrew Werthmann, Eau Claire City Council acting president and one of the garden's founders, said growing food for those in need was a main reason behind starting the garden.

"Getting food to people who need it was a big part of our mission," he said, noting the garden was located at its site in part because that part of Eau Claire lacks much access to food. "We knew there was a need for fresh vegetables, and we decided this was something we could do to help."

Werthmann said the garden also is intended to be a bright spot in the Forest Street neighborhood, long viewed as a rougher part of the city. He said he appreciates the garden's connection between people growing food and those who need it.

"This has definitely grown beyond what I would ever have imagined when it started," he said.

Shared garden members, of which there are about 25, recently met for a monthly potluck dinner, much of it made with food they grew at the site. As they ate they discussed the garden and how they are grateful to offer up some of the food they grow to others.

"We're fortunate to be able to grow all of this," garden member Mari Jackson said, gesturing to a giant tomato plant dotted with cherry tomatoes. "It's about sharing the abundance."