Every birthday is cause for celebration and many Wisconsin farm families celebrate the birthday of their farm. 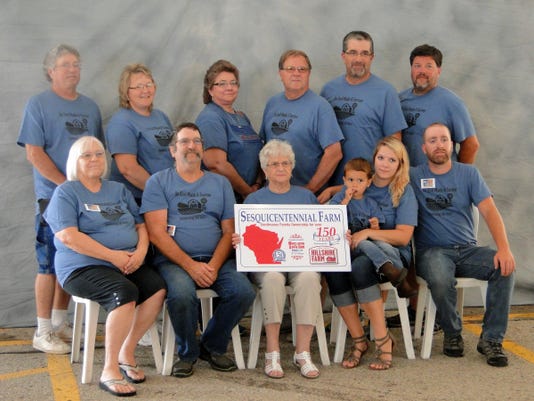 Twelve members of the Patterson family gathered at State Fair for the Century and Sesquicentennial Farm family breakfast and to celebrate generations on their family farm. The family plans to continue celebrating their farm’s anniversary with a family reunion next month.(Photo: Gloria Hafemeister)

WEST ALLIS - Every birthday is cause for celebration but many Wisconsin farm families not only celebrate their own birthdays but they also celebrate the birthday of their farm.

Fifty-four Wisconsin families gathered at the Wisconsin State Fair last week to celebrate the 150th birthday of their farms and another 123 families celebrated the 100th birthday of their farms. They gathered at the annual Sesquicentennial and Century Farm Awards breakfast at Wisconsin State Fair and many of them are holding their own family celebrations on their individual farms as well.

Several farm families at the celebration said they plan to celebrate beyond the State Fair event.

“It’s a big deal,” says Norman Patterson of Brooklyn. “Twelve of us are here at the Fair to celebrate and we’re hosting a family reunion farm celebration on Labor Day weekend, too.”

Along with Patterson at the fair was Elvina, the matriarch of the family.  She ran the farm with her husband, Robin until he passed away five years ago and Norman now runs the farm with his son, Chris.

The family had been in dairy and is now raising cash crops as well as beef cattle.

The Patterson’s have farmed in Green County since 1868 when Adoniram Patterson settled on the original homestead. His son, William then took over followed by Leon, then Robin and now Norman and Chris.

Patterson says family and the farm are the two most important things in his life and that’s worth celebrating. Asked about his favorite memory of the farm he didn’t mention the work but instead said, “Listening to Dad tell Ole and Sven jokes.”

Another Green County farm family, the Buetzers of Browntown, was also at the Fair to celebrate 100 years of farming.

The farm is owned by Larry Buetzer who farms with his son, Russell on the 250-acre farm. They also rent an additional 150 acres to support their 120 cow dairy herd.

Larry and his wife, Sue have run the farm since 1986 after taking over from his dad. His wife was a teacher and he was a city engineer for the City of Janesville. Each day he milked 35 cows before and after work until their son joined them in the business.

First they milked cows on two farms and then they combined the herds and built a freestall barn and parlor. Larry retired from his engineering job and now runs the dairy full time with his son.

He says, “It was a lot of years milking and working away from home for 31 years but I wanted to keep our family farm going.”

The Preder family of Random Lake also plans to keep the farm birthday celebration by hosting a Farm to Fork event on their organic farm in honor of Jeff’s family owning the farm for 150 years.

The farm birthday event, started as a part of Wisconsin’s Centennial Celebration at the extended 23-day Wisconsin State Fair and recognized all the farm families whose farms had been in the family 100 years. Coincidentally, the same year the Alice in Dairyland program was established that same year.

The Sesquicentennial recognition program, started by the Wisconsin Department of Agriculture, Trade and Consumer protection together with Wisconsin State Fair has been going since 1998 when the first farm families received their 150 year farm awards.

In the years since, 9467 farms have been honored as century farms and 890 farms have gone on to celebrate 150 years in the family.

Kathleen O’Leary, CEO of Wisconsin State Fair Park, points out, “The word of the day seems to be passionate. When I look out over this audience I see a lot of families who are very passionate about their farms and what they do.”

John Yingling, State Fair Park Board chairman, mentioned a T-shirt slogan he had observed at the fair that read “Hustle and heart – It will set you apart.”

He said that slogan could describe the farm families who have managed to keep their farms going for so many decades.

Zimmerman was never a farmer. He was a teacher by profession but he says somehow farming was always in his blood.

He grew up in what was then a rural farming area near where the State Fair is held today in West Allis. Because he lived so close to the Fair he went every year, missing only two fairs in all of his 90 years. One year the fair was not held because of World War II. The other year he missed was when he was serving in the military.

The breakfast honoring the farm families is supported by Hillshire Farms together with Compeer Financial.

Honorees gathered after the celebration to have their individual family photos taken with the commemorative sesquicentennial or century farm signs that they will proudly post on their own farms.