Non-homogenized milk products flying off shelves from this little creamery. 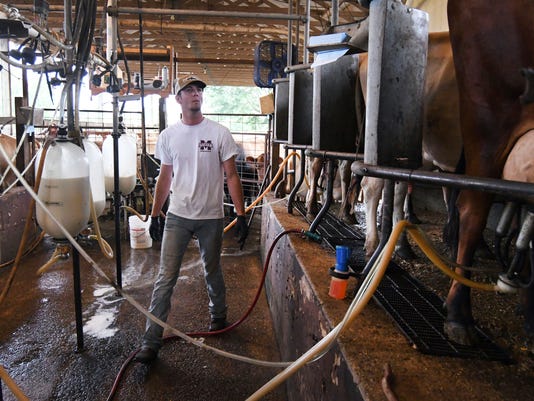 Adam Smith pumps milk from the Jersey Cows at Country Girl's Creamery in Lumberton, Miss.. The creamery got its start eight years ago, at a time when small dairy farms were struggling or going out of business.(Photo: Susan Broadbridge/AP)

HATTIESBURG, Miss. (AP) — Country Girls Creamery got its start eight years ago, at a time when small dairy farms were struggling or going out of business.

Despite the challenges, father-and-son owners Butch Smith and Kiahnell Smith and their respective wives, Dawn and Gloria, decided they wanted to bring dairy farming back to the community to provide fresh and nearly unadulterated products to south Mississippi.
Country Girls' products today may be found in close to 50 stores, restaurants and farmers markets as well as purchased directly from the farm.

One of the creamery's first customers in Hattiesburg was Corner Market, a family-owned grocery store chain based in Hattiesburg. The stores carry the milk, reduced-fat milk, chocolate milk and buttermilk in a variety of sizes.

Roberts Co. Vice President David Roberts said the dairy products have been a staple at the stores for the last seven years.

Roberts said the company is committed to supporting local farms and businesses.

When Corner Market first started carrying the Country Girls brand, he wasn't sure how well it would do — whether is would be a novelty then fade from popularity — but the milk products continue to fly off store shelves.

"People come to our store on Fridays so they can get the fresh milk before it runs out that day," he said. "It's wild."

Roberts said Country Girls is a good business to work with as well, delivering what they promise, which isn't always the case with other businesses.

In Forrest and Lamar counties, the milk also may be found at the Lil' Butcher Shoppe, E & B Discount Grocery and Ramey's Marketplace stores.

Country Girls milk is served in local restaurants as well, including the Depot Kitchen and Market, T-Bones Records and Cafe, Cotton Blues and Movie Star.

In addition to dairy products, Country Girls sells grass-fed beef, pork and chicken from the farm.

In 2016 the Smiths ventured into the New Orleans market, where their products have been well-received, first at farmers markets and adding in a few grocery stores.

The dairy also began hosting Summer Farm Days on Fridays and Saturday through the end of August to bring new and repeat customers to the farm.

Families can visit the barnyard to see farm animals like goats, calves, chicks and rabbits or try the hand-crafted play areas for an afternoon of fun. Admission is free.

School and group tours are available as well. Kiahnell Smith said the farm has had about 4,000 students visit in the last school year.

"I would say about 20 percent of our business is tourism," Butch Smith agreed.

Kiahnell Smith said he likes to call the tours agri-education, since the students get to learn about farming and where their food comes from. Agri-tourism is a growing industry in the state, but he feels it's more a learning experience and less entertainment.

The dairy has a store where visitors can buy milk, cheese and other dairy products or try "cow-to-cone" soft-serve ice cream.

Country Girls a few years ago began offering a family-friendly Dairy Fest on the first Saturday each October. It was an immediate success, which last year drew about 5,000 visitors from the Southeast, Smith said.

The festival features a number of activities including wagon rides, corn mazes, a pumpkin patch, hand-milking contest, grist mill, arts and crafts vendors, live music, a heritage center and more. The festival wraps up with a bonfire at 7:30 p.m.

Innovation is the key to success, Butch Smith said.

"We don't normally have a lot of walk-in business since we deliver (to stores and farmers markets)," he said.

The Country Girls brand rapidly gained popularity when it went into production in 2010. The non-homogenized milk products went into farmers markets and onto grocery store shelves, where consumers got to sample the farm-fresh products.

Homogenization blends the cream into the milk so it is consistent throughout. Open a bottle of Country Girls and you will find a layer of rich cream at the top.

Milk in Mississippi cannot be sold unless its pasteurized, but some pasteurization processes remove enzymes and nutrients, which is why some people have trouble digesting dairy products, Butch Smith said.

Country Girls milk is pasteurized through a low-heat process, which keeps the chemical structure of the milk intact, preserving the nutrients. Pasteurization removes potentially harmful bacteria and extends the shelf-life of the product.

The milk has a slight buttery color since it comes from Jersey cows, Butch Smith said. Jerseys are smaller and handle the Mississippi heat much better than larger cows.

While not certified organic, the cows are roughly 90 percent grass-fed and graze on pesticide-free fields, Smith said. They are not given hormones or production stimulants.

Kiahnell Smith has a background in dairy farming, having learned it from his parents, who farmed the same land, located off Mississippi 26 between Poplarville and Wiggins.
He also studied dairy farming at Mississippi State University and was a dairy farmer once before, from 1973 until around 1990 when dairy prices dropped and the cost to run the farm skyrocketed.

Ten years later, Kiahnell Smith decided to try it again, and then in 2010, with Butch Smith's help, started the creamery so they could sell their own products instead of selling the milk wholesale.

Butch and Dawn Smith are nurses, but Butch Smith decided to cut back on his nursing career to run the creamery with his father and stepmother, Gloria Smith. Butch and Dawn's three daughters, Lauren, Shannon and Gracie, who are now adults, used to help on the farm.

They were involved in 4-H, so working on the farm allowed Butch more time to spend with his daughters, whom he calls his country girls.