Hall of Fame inductees have strong ties to FFA

Hall of Fame inductees have strong ties to FFA 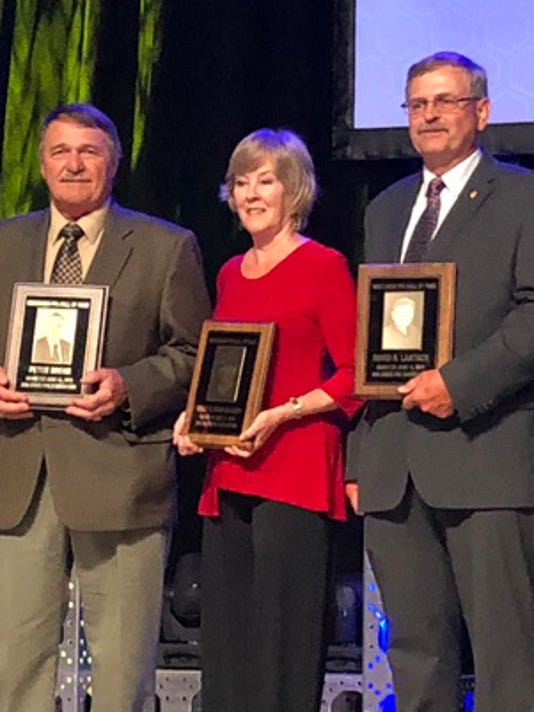 This honor pays recognition to special leaders who have impacted the State FFA Association and have set an example of service for all FFA members to follow.

Raised among a dozen siblings on his family's Mucscoda farm, Peter Drone realized his goal of taking over the family farm was unattainable. Instead he sought a degree in Agriculture Technology.

Following graduation and a stint as a semi-pro football player, Drone returned to college and earned a degree in Agriculture Education. During his first teaching position, Drone helped revamp at ag education program that continued to grow and strengthen throughout the years.

During his tenure, Drone’s meat CDE teams were very successful, with 13 winning the state contest. In 2006, after 30 years of teaching, Drone retired. However,  that was short lived and he was asked to serve as the Executive Secretary for the Wisconsin Association of Meat Processors. For 9 years he traveled to plants throughout the state in this capacity.

Mary Elstad Gagnon served as the Executive Director of the Wisconsin FFA Foundation for 14 years. It was during her years of leadership that the Sponsors Board, Foundation Board and State FFA Staff began to think bigger and increased the desire to do more for Wisconsin FFA chapters and members.

Under her watch, the number of sponsors doubled and the annual fund raising increased 370 percent. FFA programs grew and changed. She also helped create investment opportunities including the LifeWork Expo, now called the Convention Expo, set in motion the hosting of two golf outings and initiated the Blue and Gold Society recognizing individuals making a $10,000 or more gift to the Wisconsin FFA Foundation.

Growth and Change are two words that easily describe the leadership style Mrs. Elstad Gagnon encouraged and that led the Wisconsin FFA Foundation to its strong financial standing.

David Laatsch grew up on a diversified dairy farm with six siblings near Jefferson. After graduating with degrees in Agriculture Education and Poultry Science, he taught agriculture education at Beaver Dam High School for 34 years.

According to Laatsch, his greatest contribution to ag education is found in the lives of the students whose lives and careers have been enriched by his instruction. Seven of his former students have gone on to become agriculture teachers.

Laatsch was named the first National Finalist Agriscience Teacher of the Year, served two terms on the WAAE Board, 15 years on the FFA Center Board and provided seminars and published brochures to support poultry projects. He also updated the book “A History of Vocational Agriculture in Wisconsin” for the centennial celebration of the Smith-Hughes Act of 1917.