Wisconsin is home to 1,200 licensed cheesemakers who produce more than 6,000 varieties, types and styles of cheese.

Wisconsin is home to 1,200 licensed cheesemakers who produce more than 6,000 varieties, types and styles of cheese.(Photo: Larry Olmsted, for USA TODAY)

Did you know Wisconsin is home to 1,200 licensed cheesemakers who produce more than 6,000 varieties, types and styles of cheese? Twice the number of any other state.

There is a reason we are called cheeseheads.

With all that delicious cheese being made in the state, what better way to celebrate June Dairy Month than with a cheese factory tour? The only thing better than tasting the cheese is seeing how it's made. Well, maybe tasting is a little more enticing, but it's fun to see where the savory cheese comes from after the milk leaves the farm.

Since there are so many cheese factories and so little time, here are five worth checking out on your next road trip.

Cheese at Cedar Grove is made without artificial growth hormones (rBGH), animal enzymes, or genetically modified ingredients (GMOs). Visit the cheese factory and see "premium cheese being made the old fashioned way," it says on the Cedar Grove Cheese Factory website.  Visitors can learn about the art of cheesemaking, the history of cheesemaking, and the economics of the small scale cheese making industry. But call ahead for tours.

Interesting aspect: The Living Machine (TM), a working ecosystem that biologically processes wash water into clean water that is discharged into Honey Creek, according to the website.

Sid Cook of Carr Valley Cheese, based in LaValle, has won more top national and international awards than any other cheesemaker in North America. (Photo: Photo courtesy Mary Bergin)

Location: Nestled among the rolling hills and pastures of central Wisconsin at S3797 County Road G, La Valle, Carr Valley Cheese Company has won numerous awards, according to its website.

The company is best known for producing high-quality, artisanal aged Cheddars using milk from cows, goats and sheep. Carr Valley produces more than 50 original varieties to tantalize your taste buds. Self-guided tours of the family's 100 years of cheesemaking and viewing from an observation window are available, according to www.travelwisconsin.com.

Interesting aspect: Certified Master Cheesemaker Sid Cook, a fourth-generation cheesemaker, received his cheesemaking license when he was 16. He enjoys creating new cheeses, crafting cheese the old-fashioned way, by hand, with "a goal of producing high-quality cheese with outstanding flavor," according to the website.

Farm-fresh milk is combined with traditional herbs, spices, seeds, and berries gathered by hand in the Netherlands, according to farmsteadgoudacheese.com/. Cows are treated with love and respect to help produce "products that are authentically Dutch, yet made in the heart of Central Wisconsin." All Gouda varieties have won awards, with more than 60 national and international awards won in five years.

Interesting aspect: Marieke Pentermann, born and raised in the Netherlands, missed the cheese from back home and decided to get her cheesemaking license, according to the website. Four months after making her first batch of Gouda in 2007, she won a golden award at the U.S. Championship Cheese Contest and dozens more awards have followed. Visitors are welcome to sample cheese and tour the cheese plant at the Rosewood Dairy location of Renard's Cheese north of Algoma. (Photo: Colleen Kottke)

Location: For the first and only cheese factory tour in Door County, visit Renard's Cheese at 248 County Road S, Algoma.

Renard's Cheese has a long tradition of making handcrafted quality, gourmet cheese that is perfectly blended, according to the Renard's website. Cheese selections include all the Wisconsin favorites along with 50 flavor infused specialty cheeses. About 2 million pounds of cheese a year is produced at Renard's.

Interesting aspect: Besides being the only cheese factory in Door County, third generation cheesemaker Chris Renard earned the prestigious Master Cheesemaker designation, a title less than 60 cheese makers in the country can claim. 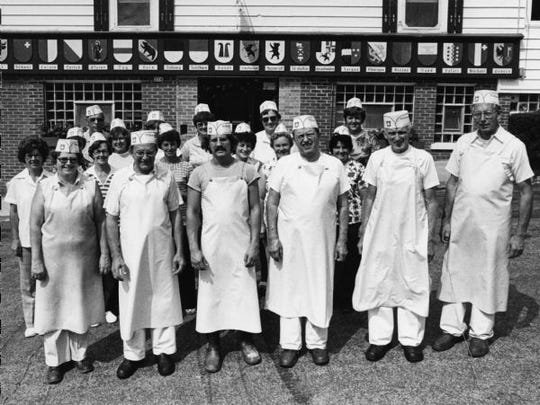 Widmer Cheese employees step outside for a picture in front of the cheese factory in 1979. Jim Widmer (far right) is pictured with his nephew Joe Widmer (center) current owner, and brothers John Widmer (third from right) and Ralph Widmer (second from right). (Photo: Jim Widmer)

Step back in time at Widmer's where visitors can get a close-up look at making some of the state's most classic cheese varieties. The "make room" with its open vats being tended and curds stirred or hand-scooped into forms is only a step down from the retail area at Widmer's, according to widmerscheese.com. The best time to see cheese making in action is from 7 - 11:30 a.m., Monday - Friday.

Interesting aspect: If the flags of Swiss cantons flying on the outside don't draw your interest, maybe the "famous Widmer bricks" placed atop forms to press out the whey of the signature Widmer Brick cheese — which is still made in the same open vats Joe Widmer's grandfather used — will. Widmer's Cheese Cellars is rich in three generations of cheesemaking history.