Research out of the UW-Madison has detected prions responsible for chronic wasting disease in samples taken from sites where deer congregate.

New research out of the University of Wisconsin-Madison has detected prions responsible for chronic wasting disease (CWD) in samples taken from sites where deer congregate.(Photo: DNR Photo)

MADISON - New research out of the University of Wisconsin-Madison has, for the first time, detected prions responsible for chronic wasting disease (CWD) in samples taken from sites where deer congregate.

Scientists searched for prions at mineral licks - areas where deer seek out essential nutrients and minerals - in the CWD endemic area across south-central Wisconsin. Out of 11 sites, nine had detectable levels of the disease-causing misfolded proteins. Prions were found both in soil and in water from the sites, as well as in nearby fecal samples from one site.

This research helps confirm longstanding suspicions that prions can accumulate in the environment in areas such as mineral licks or feeding and baiting sites where deer congregate.  Scientists believe that environmental reservoirs of prions could serve as an additional transmission route of CWD, which also passes between deer through direct contact. Environmental reservoirs of prions are not expected to pose a health hazard to humans but could be a potential source of transmission to other animals. 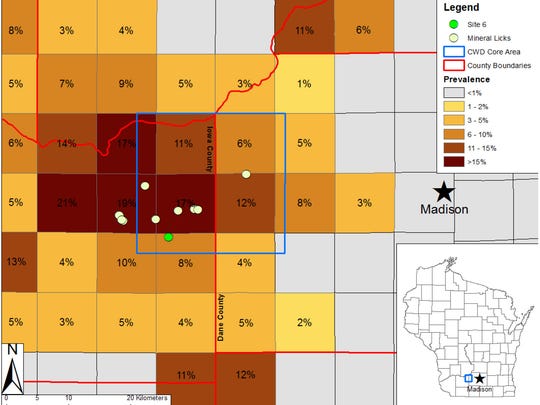 Locations of sampled mineral licks and prevalence of chronic wasting disease (CWD) in hunter-harvested white-tailed deer from 20102013 in south-central Wisconsin, USA. Squares are townships of 9.66 km per side. Inset shows state of Wisconsin, USA. Site 6 denotes the mineral lick with CWD-positive fecal samples. (Photo: PLOS ONE)

In Wisconsin, CWD is concentrated in southwestern and southeastern counties. More than 30 percent of adult male deer are infected in portions of Iowa County, according to the Department of Natural Resources. The disease is fatal and is transmitted through infectious prion proteins. It is unknown if humans can contract CWD from eating infected meat, but the World Health Organization has recommended that people avoid doing so. No cases of human transmission have been reported.

The study, which was funded by the U.S. Geological Survey with support from the National Science Foundation, was published May 2 in the journal PLOS ONE. Michael Samuel, an emeritus professor of wildlife ecology, and Joel Pedersen, a professor of soil science, led the work, with colleagues in forest and wildlife ecology and the Molecular and Environmental Toxicology Center at the UW School of Medicine and Public Health.

"This is the first time that anyone has demonstrated the existence of prions in naturally contaminated soil," says Pedersen.

The prions were detected using a technique that amplifies the small amount of misfolded, diseased version of prion proteins isolated from soil or water samples. The misfolded varieties are added to a pool of properly folded proteins from mice engineered to produce them. The diseased folding state is transmitted to properly folded proteins, increasing the number of diseased prions and facilitating measurement.

It is not clear if the quantity of soil-dwelling prions detected in the current study are sufficient to infect deer.

"Although we are able to detect prions, quantifying the amount present is still difficult using this technique," says Pedersen. Previous research by the Pedersen lab has demonstrated that soil-bound prions are more effective than free prions at infecting hamsters.

"It's a great advance for trying to understand how this disease transmits in the environment," says Rodrigo Morales, a professor of neurology and prion researcher at the University of Texas Health Science Center at Houston who was not affiliated with the study. "It explains what could be the main source of (transmission)."

Samuel says the significance of prion-contaminated environments in the spread and persistence of CWD among free-ranging deer remains unknown.

"We know it can occur, but we just don't know how it occurs in the wild, or how important it is relative to deer contacting each other," says Samuel.

Ten of the mineral lick sites tested in the study were artificial, while one was natural. Nine of the 11 sites were on private land and were tested with permission of the landowner.

"We manage most diseases by trying to interrupt their spread. Having CWD concentrated at animal licks means that's going to be difficult," says Don Waller, a professor of botany and environmental studies at UW-Madison who researches Wisconsin's deer herds and was not involved in the study.

"It's not easy to test for CWD, but this result suggests we should be looking for hot-spots of CWD prions in the environment and doing all we can to cover them up so animals can't get to them. We may also want to do more testing in other animal species to see which may be vulnerable to CWD infection," says Waller.