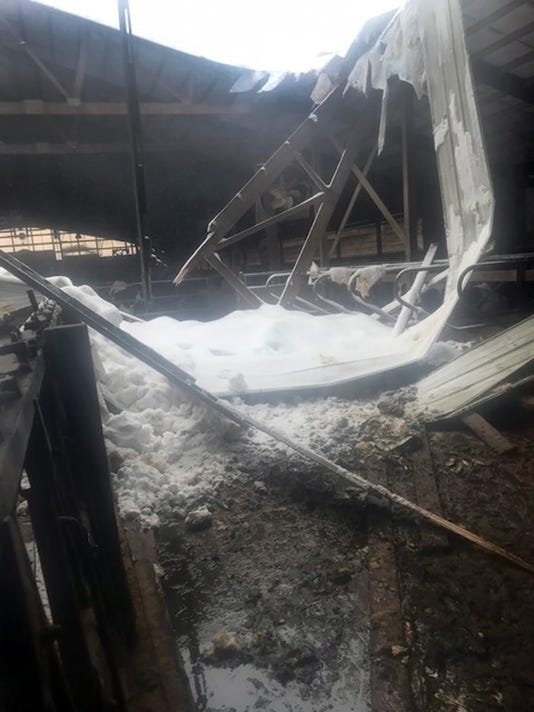 A portion of a barn roof at the farm of Heather and Jay Jauquet, Pulaski, collapsed from the weight of snow dumped on the northern part of the state during Blizzard Evelyn on April 15. (Photo: Heather Jauquet)

GREEN BAY - In an effort to speed up potential relief efforts for farmers impacted by Wisconsin’s recent Blizzard Evelyn, the Wisconsin-based American Dairy Coalition (ADC) is asking those who sustained damage to contact their Farm Service Agency (FSA) office immediately.

Officials will quantify the damage reports and estimate the losses on a county-by-county basis. The totals will be provided to Gov. Scott Walker to use as the criteria for possible monetary assistance from state and/or federal resources.

“Time is of the essence,” said Laurie Fischer, ADC chief executive officer. “Whether they are facing collapsed structures, lost milk production, high insurance deductibles, animal losses or other situations, farmers need to get their damages on the record with their local FSA office. Just one phone call could have a big impact down the road.”

Those assessing damages need to look beyond current losses not covered by insurance, Fischer noted, and consider the longer-term economic losses that will impact future business profitability.

The ADC recommends farmers include in their assessments:

The American Dairy Coalition will continue to monitor this information and will keep you up to date on developments and information as they become available.