Authorities responded to several reports of roofs collapsing in Brown and Outagamie counties as a major blizzard dumped heavy, wet snow on the region. 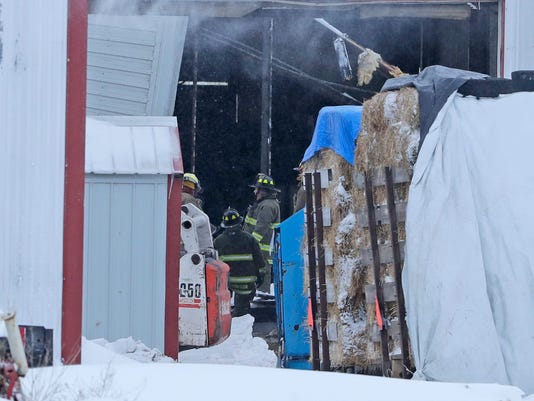 GREEN BAY – Authorities on Sunday responded to multiple reports of roofs collapsing in Brown and Outagamie counties as a major blizzard dumped heavy, wet snow on the region.

In Denmark, four people and livestock were trapped in a barn when its roof gave in.

The Denmark Fire Department was called just before to 7 p.m. to Cedar Red Dairy, 5253 Larsenville Road. There were no immediate reports of injuries.

Brown County rescue crews on Sunday also were called to reports of roofs collapsing at Machine Service, 1000 Ashwaubenon St., in Ashwaubenon, ABC Supply on Velp Avenue in Howard, according to emergency radio reports.

No one was hurt in the three Outagamie County incidents and the sheriff’s department wasn’t aware of any animals that were injured, either.

In Ashwaubenon, part of the roof at the Econo Lodge hotel caved in as guests were eating breakfast. 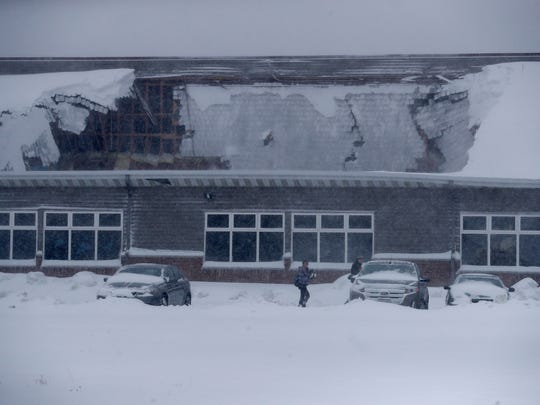 Chris Stephens of Fort Wayne, Indiana, said he was making waffles in the hotel's lobby around 9:40 a.m. when the incident occurred.

The roof collapsed over the hotel's pool, which was unoccupied at the time after hotel management closed the area because of water leaking from the ceiling, Ashwaubenon Public Safety Chief Eric Dunning said in a statement.

The hotel, at 2815 Ramada Way, was subsequently evacuated and guests were moved to other area hotels. There were 64 rooms occupied in the Econo Lodge at the time of the collapse.

Plows cleared snow from the parking lot and guests helped fellow guests extricate their vehicles from the snow, Stephens said.

The roof of Performance Corp., 112 North Mainline Dr. in Seymour, also started to cave in, he said. This scene, viewed from the window of Milwaukee Journal Sentinel reporter Rick Barrett's house, shows the amount of snow that fell north of Appleton on April 15.  (Photo: Rick Barrett)