Applying lime to restore a soil pH that's appropriate for growing alfalfa, is one solution for fields where plants have lost their vigor.

Other than citing the need to apply lime to restore a soil pH that's appropriate for growing alfalfa, there aren't easy answers to problems farmers in some parts of Wisconsin have begun to notice with their third and fourth annual cuttings.(Photo: Colleen Kottke/Wisconsin State Farmer)

SEYMOUR – Other than citing the need to apply lime to restore a soil pH that's appropriate for growing alfalfa, Jamie Patton doesn't have an easy answer to the problems that farmers in east central Wisconsin and perhaps elsewhere have begun to notice with their third and fourth annual cuttings.

Patton examined this topic in a presentation at the annual meeting of the Outagamie County Forage Council. On Jan. 31, Patton left her previous position as the Extension Service agriculture agent in Shawano County to become the nutrient and pest management senior outreach specialist covering 15 northeast counties for the University of Wisconsin-Madison.

The problem with alfalfa growth for the latter annual cuttings was called to Patton's attention by Outagamie County Extension Service crops, soils, and horticulture agent Kevin Jarek after he received several calls from farmers in the county about patches in alfalfa fields where the plants had lost their growing vigor.

In the northern part of the county, where sandy soils are typical, the soil pHs were found to be in the low 5s while a problem field with heavy soil in the eastern part of Outagamie County had a very high pH of 7.9, Jarek reported. He noted that the sulfur content in those fields was low and suggested a failure to apply lime or livestock manure might have been other contributors.

Jarek was also wondering why there were great discrepancies in the full season yields that were tabulated in 16 area fields during 2017. He noted that six of them had total dry matter yields of less than 3.5 tons per acre while four enjoyed per acre yields of at least 5 tons.

Patton's quick answer was that neglecting to apply lime is a major reason for having drops in the soil pH from the ideal 6.8 to 7.0 for growing alfalfa. As a result, the acidity increases, she explained. “At a pH of below 5, alfalfa dies.”

After noting that current research on the topic is lacking, Patton cited one study which calculated a one ton per loss in dry matter harvest per acre in the first cutting alone from soil with a 5.0 pH compared to soil with the ideal range and a finding in Slovakia of a 45 percent loss in protein in alfalfa grown on soil with a 5.0 pH.

The numbers used to measure pH are misleading, Patton pointed out. A pH drop from 6.0 to 5.0 is really a 10 fold increase in acidity while a drop from 6.0 to 4.0 is actually a multiple of 100 in acidity, she indicated. Reacting to isolated reports of pHs of 3.3 and 8.5, Patton asked “how does this happen?”

Addressing the chemical and physical attributes of acidity, Patton listed the active stage in water, the exchangeable cation exchange capacity (CEC) activity, and the reserve portion embedded in minerals and organic matter. She noted that crop agronomists usually address the first two on that list. 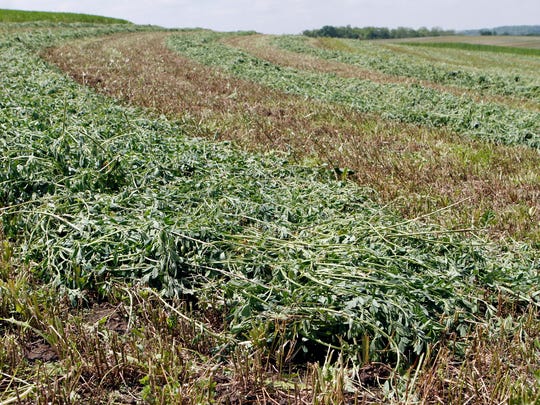 Neglecting to apply lime is a major reason for having drops in the soil pH from the ideal 6.8 to 7.0 for growing alfalfa. As a result, with a soil ph below 5, alfalfa dies. (Photo: Carol Spaeth-Bauer/WSF)

The benefits of lime in boosting soil pH occur in the active stage, Patton stated. Asked what form of lime to apply, she suggested a course texture over pel-lime and warned that it takes 12 to 24 months for lime to affect the soil pH.

On the choice of calcite or dolomite line, Patton said either is acceptable. She would choose dolomite for fields with low magnesium levels in the soil and calcite for those with high magnesium.

Regarding liming schedules, Patton prescribed higher rates less often in heavy soils and lower rates more often on light soils. Based on soil tests, it would often be appropriate to apply varying rates within fields, she suggested.

It would take about five tons of lime per acre to raise the soil pH from 5.5 to 7.0, Patton continued. At a per acre applied cost of $25, a first cutting increase of one ton per acre in dry matter alfalfa yield valued at $160 per ton would more than cover the lime cost, she stated.

A pH of 7.0 is ideal supporting active rhizobia, which are crucial for growing alfalfa, Patton pointed out. She said the lack of rhizobia activity is closely tied to low protein content in alfalfa grown on low pH soils.

The relevance of CEC levels is whether the nutrients which are essential to alfalfa and other crops are available for uptake, Patton explained. The CEC elements have either positive or negative charges with the negative prevailing in heavy soils, she added.

In a low pH soil, alfalfa plants suffer a lack of access to phosphorus and molybdenum, Patton pointed out. The phosphorus is tied up by the iron and aluminum in low pH soil while calcium is locked up in a high pH soil, she noted. “Aluminum is toxic to alfalfa plant roots in soil below 5.5 pH.”

A different set of challenges arises with soil above 7.0 pH for growing alfalfa, Patton observed. Because phosphorus might not be available at that point, she would apply phosphorus every year, preferably in a knifed or banded application in the early spring or late autumn.

At a high pH, sulfur and boron are likely to be in short supply, Patton stated. To lower the pH, she suggests elemental sulfur (cost about 90 cents per pound) but noted that it works only with a starting pH of lower than 7.5. She also mentioned top dressing with 3,000 to 5,000 gallons of manure per acre.

For lowering pH, Patton emphasized that gypsum (calcium sulfate) is not a remedy. She indicated although the gypsum dissolves it does not interact with water as lime does.

As if there aren't already enough variables, Patton cited a phenomenon being noticed on agricultural land in the area by agronomists — that soil pHs are rising even without the direct or indirect addition of lime.

“This does not agree with the textbook,” she remarked. “It would be normal for them to decrease over time.”

The diversity of soils within Wisconsin and even within fields creates a big challenge in trying to offer advice on fertilizer applications, Patton observed. There's a continuing dynamic and even soil sampling provides no more than “a snapshot,” she said.

“Science is not perfect,” Patton concluded.

During her presentation, Patton echoed the concerns of Midwest Forage Association local council director Chelsea Russell, who provided an update on the group's activities.

Both cited the minimal amount of research on the link between alfalfa production and soil pH. Patton noted that she had to find data from other countries and from as far back as 1969 and 1991 in developing her presentation.

Patton can be reached by e-mail to jjpatton2@wisc.edu.