Crop farmers depend on high capacity wells to irrigate their crops. (Photo: WFBF)

“We’ve had some significant changes,” said Freihoefer, “and, we want you, our customers, to have a good experience working with us. I can’t rewrite the law, but if there are ways we can do things better in implementing the rules in a clearer way, we’re always open to that.”

He noted the definition of what constitutes a high-capacity well has changed somewhat.

A high-capacity well can be just one well drawing 70 gallons per minute (and 100,000 gallons per day) or a combination of all the wells on a property.

However, residential wells and fire protection wells are excluded from the definition of a high capacity well, and their pumping capacities are not included in the calculation of a property's well capacity.

Currently there are about 12,000 active high-capacity wells in the state that are regulated by the DNR.

High-capacity wells have been around Wisconsin since the 1940s but they mushroomed in the 1990s as demands from large-scale irrigation farms grew. (Photo: Colleen Kottke)

“When an application is submitted for a high-capacity well, our team conducts a quantity review based on the criteria under which we have the authority to review,” Freihoefer related.

“Applications are either approved as submitted, or if there are some issues we try to approve the well with as few modifications as possible so long as they meet the state requirements. If they can’t meet the requirements, the application is denied.”

Freihoefer noted that in May 2016 Attorney General Brad Schimel issued an opinion on how high-capacity wells should be reviewed. “We implemented that opinion as part of our review process,” he said.

A decision was handed down by a Dane County Circuit Court in October 2017 that nullified the permits for eight high-capacity wells in that county. 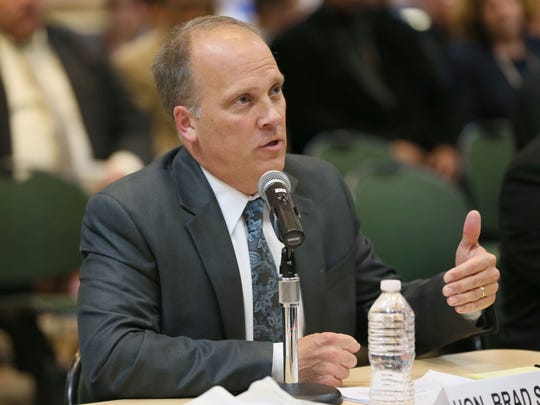 “From Oct. 11 until the middle of December approval of new permit applications was on hold while we reviewed that decision,” Freihoefer said. “But we have now resumed reviewing applications based on the attorney general’s opinion, while also implementing the very narrow court decision.”

“If you need to replace an existing high-capacity well, you no longer are required to submit an application to the department for approval,” he said. “But there are some steps that need to be taken in order to meet the new criteria for approval.”

Proof must be provided by the well driller or pump installer that the existing well has been filled and sealed, and the new well must be inspected to ensure it complies with current codes.

One of the following criteria also needs to be met. “If you’re going to drill the replacement well to prevent contamination, it must be drilled within 75 feet of the original well or farther away from the nearest groundwater protection area,” Freihoefer explained. “Also, the original well approval components need to be maintained. and DNR must be notified within 90 days.”

Reconstruction involves replacing a screen or other failed part of an existing well and the DNR must be notified of what action has been taken.

“If you sell your property, filling out a property transfer form transfers the permit to the new owner, with no approval required,” said Freihoefer. “When you have a high-capacity well, you also have to report your monthly water usage to the department each year.”

In an effort to make this process easier to understand, DNR has revamped its website, http://dnr.wi.gov/topic/Wells/HighCap/, to make it more customer friendly.

The 2017 Act 10 also mandated an extensive study of three lakes in the Central Sands region, a contiguous area east of the Wisconsin River that spans several counties and includes more than 800 miles of trout stream and 300 lakes.

During this four-year study, the department will evaluate and model the potential impacts of groundwater withdrawals on three Waushara County lakes – Long Lake and Plainfield Lake near Plainfield, and Pleasant Lake near Coloma.

“We’ll rely on computer models to run scenarios,” said Freihoefer, but we’re going to spend a lot of time looking at the uses of those three lakes, and different components including water quality, aquatic life and navigation.” 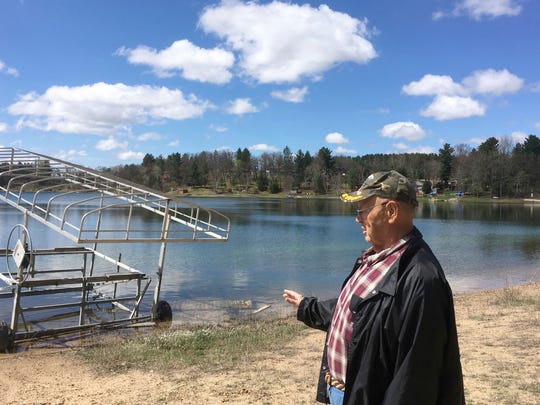 In this April 21, 2017 photo, Cris Van Houten explains how the shoreline of Huron Lake, has receded over the years in Oasis, WI. Van Houten and other central Wisconsin lake property owners insist a proliferation of high-capacity wells are draining the region's lakes. (Photo: Todd Richmond, AP)

“We have to make that deadline of June 2021 to report our findings and recommendations to the Legislature” stressed Freihoefer.

“We released the work plan last December,” noted Freihoefer. “Data collection will occur this year and in 2019, and will include the installation of lake level meters. We’ll have a lot of the DNR staff on those three lakes.”

“Public hearings will be held in the spring of 2021, followed by a 30-day comment period, and we’ll respond to the comments before we present our report to the Legislature.” said Freihoefer.