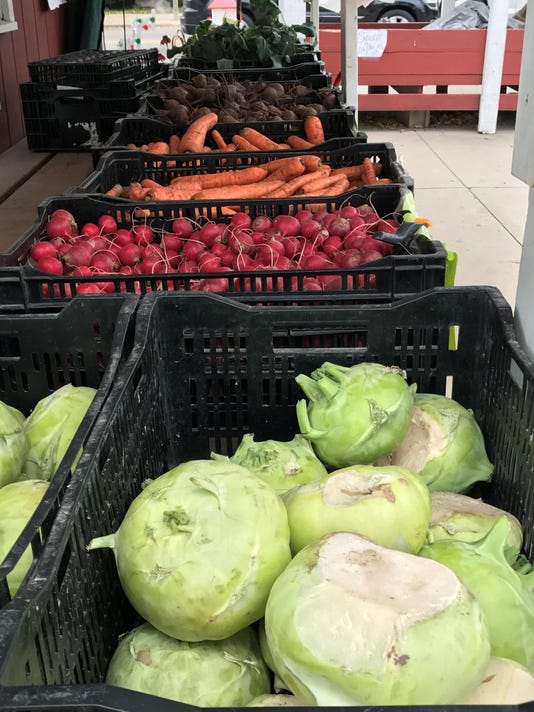 The Downtown Oshkosh Saturday Farmers Market wants out of having to pay about $9,000 in fees for traffic signs, barricades and other services the city provides to the weekly event.(Photo: Colleen Kottke/Wisconsin State Farmer)

OSHKOSH - The Downtown Oshkosh Saturday Farmers Market wants out of having to pay about $9,000 in fees for traffic signs, barricades and other services the city provides to the weekly event. It's a sum that Executive Director Karlene Leatherman said could force higher costs on vendors and bring new charges on community groups like the Girl Scouts and others that have set up booths at the market for free in prior years.

It's a request that's likely to draw opposition from some councilors. The city raised fees on event organizers last fall and has never waived fees on any event in Oshkosh, fearing one exemption could lead other organizers to ask for a pass, too.

A provision in the city's events fee ordinance allows the council to waive the charge if events meet a set of criteria. City-owned events are exempt from special events fees, for instance. So are funerals.

Because of this, the Downtown Business Improvement District recently endorsed making the Farmers Market an official city event. While the market still has an independent board of directors, it is under the umbrella of the BID, Leatherman said.

Despite the market's new designation, the council still must consider whether to waive fees for the event.

A fee waiver could shield the Farmers Market from higher fees next year and further increases in years after that. Continued increases could force the market to raise its rates to cover higher events costs, pushing some vendors to other communities, Leatherman said. Vendors now pay $300 for a 10-foot-by-10-foot slot at the market, which runs 22 Saturdays downtown in warm weather months.