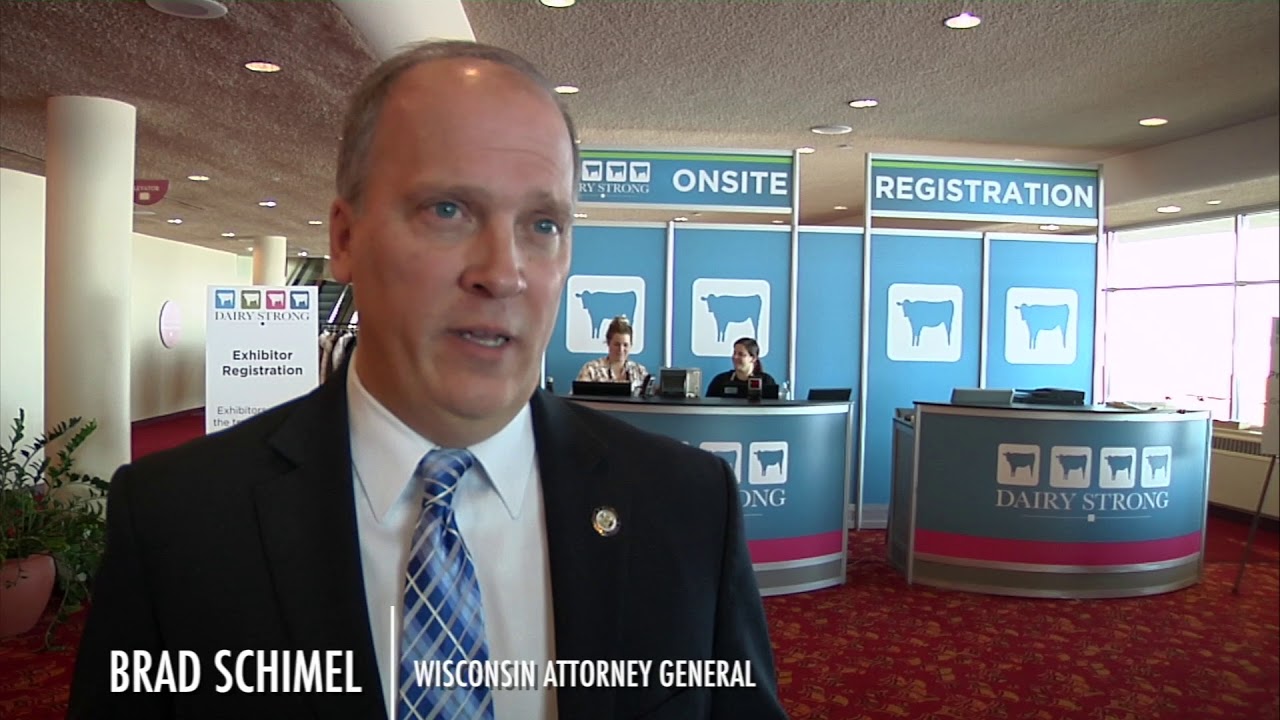 MADISON - Since he took the oath of office in 2015, Wisconsin Attorney General Brad Schimel has promised to protect the state's economy by maintaining a stable and predictable regulatory environment.

"Regulatory certainty is critical to the employers and innovators in this room and to our economy," Schimel told a large group of dairy farmers and other industry professionals during the annual Dairy Strong conference Jan. 18 at Monona Terrace. "And I am proud of the role we play in helping Wisconsin agriculture's mission to feed the world."

The state attorney general's office is also tasked with making sure that the government and its agencies operate under the scope of the authority authorized by the state legislature.

"Nowhere has there been a clearer example than the high capacity well program in Wisconsin," Schimel said.

The attorney general issued an opinion in 2016, saying the DNR does not have authority to put conditions on well applications that would take into account their cumulative effects on streams, rivers and lakes in the surrounding area.

His decision—considered to be a big win for agriculture and business interests—cited a 2011 state law prohibiting state agencies such as the Wisconsin Department of Natural Resources from making or enforcing rules not listed in state statutes.

"A series of court decisions and lawsuits have undermined what would otherwise have been considered a fairly straightforward regulatory program," Schimel said. "The result was regulatory paralysis by the DNR to the point that well applications were backlogged for months and sometimes years.

"To resolve that gridlock, at the request of the Legislature, I issued a formal opinion. We didn't make a new law, we simply pointed out what the state law is so that the DNR could get back to work and you could get back to the business of feeding us all," he added.

Schimel also pointed out that a number of high capacity well permits that have been issued are now being challenged in court.

"We expect that some cases may make their way to the Supreme Court and perhaps we'll finally get some certainty in this regulatory wilderness," he said.

Another case that came before the Department of Justice now lies in the hands of the Wisconsin Supreme Court involving a proposed large-scale dairy near Wisconsin Rapids. At the center of the argument is whether building permits filed by owners of Golden Sands Dairy in 2012 entitle the company to use about 6,000 acres for cropland.

The Wysocki family took the town to court and won when the town of Saratoga officials refused to issue building permits for the proposed dairy's buildings. The Supreme Court now is considering whether permits for the buildings allow the company to plant crops across almost the entire property.

"Imagine a barn full of livestock surrounded by nothing: no fields for crops. That's absurd," Schimel said. "No farm can be successful in that environment. Government should not be able to change the rules in the middle of the game."

Schimel says that attacks on a stable regulatory environment aren't exclusively fought in Wisconsin, but beyond the Badger state's borders as well. Just last year, the state of Wisconsin joined the state of Missouri and Indiana in suing the states of California and Massachusetts challenging state regulations on egg production.

The case is so important that Schimel feels it may be taken up by the U.S. Supreme Court to decide.

"What's happening is that California and Massachusetts are setting rules that require other state egg producers including Wisconsin's to comply with those states' very restrictive farming regulations if they want to sell their eggs there," Schimel said. "While there may not be many egg producers in this room today, these state rules in California and Massachusetts involve regulatory overreach that could easily turn to you and the work you do."

Schimel has also been busy defending the state of Wisconsin from federal overreach against the Obama Administration's regulations like the Waters of the U.S. (WOTUS) rule.

WOTUS clarified what types of water bodies are applicable under the regulations of the Clean Water Act, so-called “navigable waters.”

In 2015, a multi-state coalition, including Wisconsin, filed a lawsuit in federal court challenging the legality of the rule adopted by the EPA and U.S. Army Corps of Engineers. Last February, President Trump issued an executive order to re-evaluate WOTUS, beginning what many saw as a repeal of the rule.

"That rule would have drastically expanded federal authority to regulate natural resources in Wisconsin, including virtually any body of water - isolated streams, 100-year floodplains, even ditches next to your field," Schimel said. "This regulation would have absolutely crippled the ag industry in Wisconsin because it would require federal permits for daily activities carried out on farms. If you think local and state permit processes are time-consuming, expensive and intrusive..."

In the meantime, the Supreme Court ruled unanimously Monday, Jan. 22, 2018, that litigation over the WOTUS should begin in the lowest level of federal courts, not in the federal courts of appeal. Justice Sonia Sotomayor delivered the opinion.

"Wisconsin farmers and leaders in agriculture are the backbone of the state's economy," he said, "and as your attorney general, I'm committed to ensuring our state's producers, growers and job creators can be certain that the regulations are stable and I'm committed to upholding the rule of law."