The sausage that made Sheboygan famous

Sausage is part of a deep food tradition in Wisconsin.

The sausage that made Sheboygan famous

Joseph Spatt's bratwurst stand "The Come on In" was one of the city's first locally owned fast food restaurants or lunch rooms. It served charcoal grilled bratwurst, hamburgers and steaks on semmel rolls garnished with mustard, onions and pickles. Joseph and his brother, John Spatt, operated the popular metal Quonset hut-style eatery on Michigan Avenue for 15 years in the 1930s and ‘40s. The site is now a vacant lot.(Photo: Submitted)

Since 1953, August brings Bratwurst Day, a celebration of sausage and of our collective German heritage. The brat is a social food in Wisconsin where Germans first introduced it to the New World. We have brat frys on weekends like folks have barbecues in the south and Chicago has its deep dish pizza.

It is part of a deep food tradition.

But in Sheboygan County, the sausage is something more; it is noble; it is a type of Teutonic soul food. One oldtimer described his perfect day: “We would fry some bratwurst and put them on Hirsch’s semel and have a few bottles of Schreier’s beer. After lunch we would play horseshoes. It was a feast and a day fit for a king.”

Nearly 47 percent of all Sheboygan County residents claim German ancestry. We have the townships of Rhine and Mosel. We have the Gesangverein Concordia German chorus, D'Werdenfelser Schuhplattlers German folk dance group, the Sheboygan Turnverein (Turners) and Mission House (Lakeland) College started by a band of devout Lippe-Detmolders.

And we have the bratwurst. 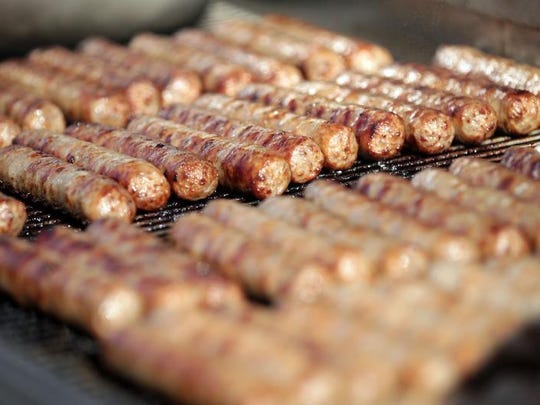 In Sheboygan County, the sausage is something more; it is noble; it is a type of Teutonic soul food. (Photo: Getty Images)

Few things identify one’s German heritage more than making sausage. Sausage was a means of survival for our German ancestors during the winter months, as well as a way to use precious meat scraps and pay homage to their porcine good luck charm.

The real story of German sausage in the county lies not in Bratwurst Day but in the small neighborhood meat markets where patrons and owners addressed each other as freund. In the 1940s and 1950s upwards of 50 meat markets fed county residents with a score of sausage types produced weekly.

Heinecke’s Meat Market made baloney on Mondays and Thursdays and wieners on Tuesdays. Wednesdays were for Kesselfleisch, a cooked sausage, liver, tongue, braunschweiger, head sausage and blood sausage. Not until Friday did the butcher make summer sausage and bratwurst.

In reality, summer sausage was Sheboygan County’s first “star.” The Hertziger family, who came from Germany in 1839, opened a tavern on the corner of Calumet and Superior in Sheboygan. They also made and smoked sausage at the rear of the tavern.

The Hertziger Sausage Co. was founded in 1916 and by 1952 output went over the 2 million pounds. A family story had Grandpa Hertziger once proclaiming, “Bratvurst, ach, it vas summer sausage, not bratvurst ve first made.”

In the days before refrigeration, summer sausage was superior because it was cured and lasted longer. Brats had to be eaten fresh.

Hertziger’s was also the first sausage maker to produce all-beef brats. Jewish citizens bought them because they didn’t use pork.

Schultz Brothers Meat Market, at 11th and Michigan, opened its doors in 1924 selling five pounds of summer sausage for just $1.

During cold winters, Elmer Schultz used hot coals to keep his feet warm as his horse pulled his delivery wagon through the streets. He also held a kerosene lantern between his knees to light the way. Schultz noted that to alert shoppers of the arrival of vendors, butchers had a bell, fishermen a horn and bakers a whistle.

Germans are acknowledged as the premier sausage makers, but Slovenians also made a very popular Kranski Clobasa. Kranski is derived from the Slovenian village of Kranj at the foot of the Julian Alps where the seasonings originated. Luedtke’s Food Market made both fresh and smoked Kranski. They typically sold 500 pounds of it during the holidays and another 500 at the annual St. Cyril and Methodius picnic.

Records of brat production are spotty, but we do know that Michael Gottschalk Sr. of Sheboygan began making pork sausages as early as 1862 sometimes roasting them over charcoal fires for his customers. Because of their popularity, they were soon sold to the general public. But, it was years before brat sales surpassed those of summer sausage.

By the 1920s, once ice boxes and later refrigerators were commonplace in homes, bratwurst increased in popularity. From then until the 1960s and 1970s local meat markets flourished and produced tons of bratwurst.

Eateries like Freimund’s Brat Stand in Plymouth and Joe Spatt’s in Sheboygan popped up in the 1940s and 1950s to sell the grilled wonders.

In 1953, the first brats rolled off the grill at Milwaukee County Stadium, introducing them to the nation. Stadiums across the country soon followed suit, but Miller Park is still the only venue that serves more sausages than hot dogs.

To celebrate the city’s 100th anniversary, Bratwurst Day was born on Thursday, Aug. 13, 1953. The idea, conceived by A. Matt Werner, editor of The Sheboygan Press, was a means of publicizing Sheboygan’s claim to fame: the bratwurst. This wonderful community event was, and still is, sponsored by the Sheboygan Jaycees.

Family-owned meat markets have, for the most part, gone the way of the dinosaur. Government regulations and large supermarkets led to the decline and closure of all but a few. Yet, happily the brat remains.

So, as you're enjoying your bratwurst this weekend, remember to salute that very first sausage that made Sheboygan famous, the summer sausage.